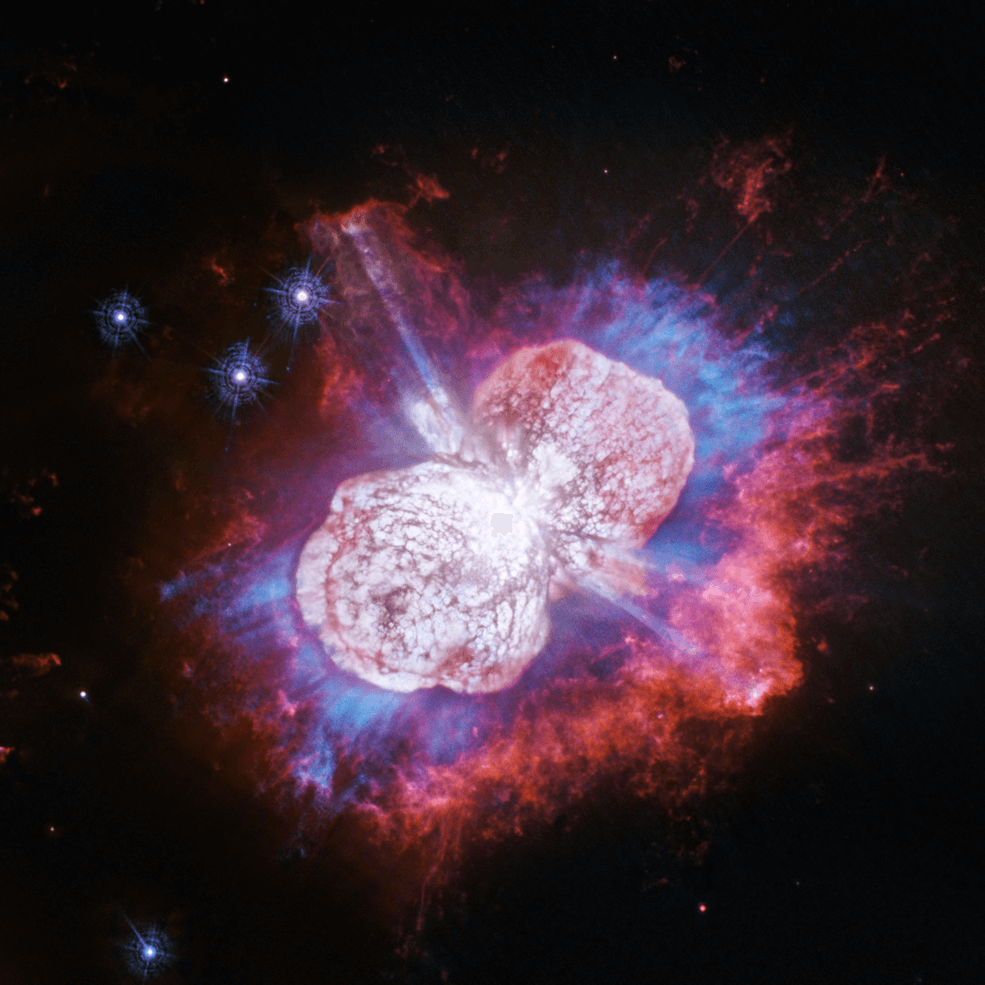 We all love fireworks but no one loves fireworks more than the U.S on the 4th of July so what better way to celebrate it than with the most extended fireworks show ever?

This particular red, white and blue performance kicked off around 170 years ago and is still going strong. We’re talking about a super-massive star known as Eta Carinae, the largest sibling of a double-star system residing 7.500 light-years away, which the Hubble telescope has been glancing at for a while.

The star is bubbling out into lobes of gas and dust in the image Hubble sent back to Earth and is shown shimmering in shades of red, white and blue, shades comprised of dust, gas and other filaments that were blown out of it.

It was sometime back in 1840 that Eta Carinae erupted and turned into the second-brightest star visible in the sky for over a decade – back in the day, it was shining to brightly that the sailors in the southern seas used it for navigation.

Back then, the surge of light resulting from the explosion even outshone Sirius, which is almost a thousand times closer to the Earth.

But those times are gone and Eta Carinae has dimmed down considerably since. It is not as visible to the naked eye as it used to be but that doesn’t mean that the light show has ended – on the contrary, astronomers have been studying it via the Hubble telescope for 25 years.

Eta Carinae’s system has been filled with eruptions through the years and the star has been consistently blasting off parts of itself into the Cosmos but the astronomers can still see the signs of the initial eruption at the outskirts of the star – the hot glowing clouds around it, known as Homunculus Nebula, were something Hubble had its eyes on ever since its launch in 1990.

The latest image of Eta Carinae, which NASA released in celebration of the 4th of July, was captured by the telescope’s Wide Field Camera 3 and mapped the warm magnesium gas that glows in ultraviolet light. In the photo, it is the one shown in blue.

The team expected to find that light from magnesium would come from the array of filaments that is seen in the glowing nitrogen (shown in red in the photo) but were surprised to find out that a new, luminous, magnesium structure had formed in the space between the bubble-like ends and the nitrogen filaments.

“We’ve discovered a large amount of warm gas that was ejected in the Great Eruption but hasn’t yet collided with the other material surrounding Eta Carinae,” Nathan Smith from the Steward Observatory at the University of Arizona in Tucson, Arizona and lead investigator of the Hubble program has said. “Most of the emission is located where we expected to find an empty cavity. This extra material is fast, and it ‘ups the ante’ in terms of the total energy for an already powerful stellar blast.“

Why is everyone so excited about some gas, you ask?

Well, it’s quite important because this new gas helps the astronomers understand more about how the eruption began and the technique employed to search ultraviolet light for warm gas could be further used to study other stars and gaseous nebulae.

“We had used Hubble for decades to study Eta Carinae in visible and infrared light, and we thought we had a pretty full account of its ejected debris. But this new ultraviolet-light image looks astonishingly different, revealing gas we did not see in either visible-light or infrared images,” Smith went on to say. “We’re excited by the prospect that this type of ultraviolet magnesium emission may also expose previously hidden gas in other types of objects that eject material, such as protostars or other dying stars; and only Hubble can take these kinds of pictures”.

As to what caused the eruption of Eta Carinae, that’s still a mystery but remains the subject of speculation and debate among astronomers. They do have a good idea about how its fireworks show will end, though that might have already happened a while ago – if it did however, it will take the luminous blast around 7,500 years to reach Earth.

So, until then, there’s still plenty of time to bask in Eta Carinae’s end-days beauty.