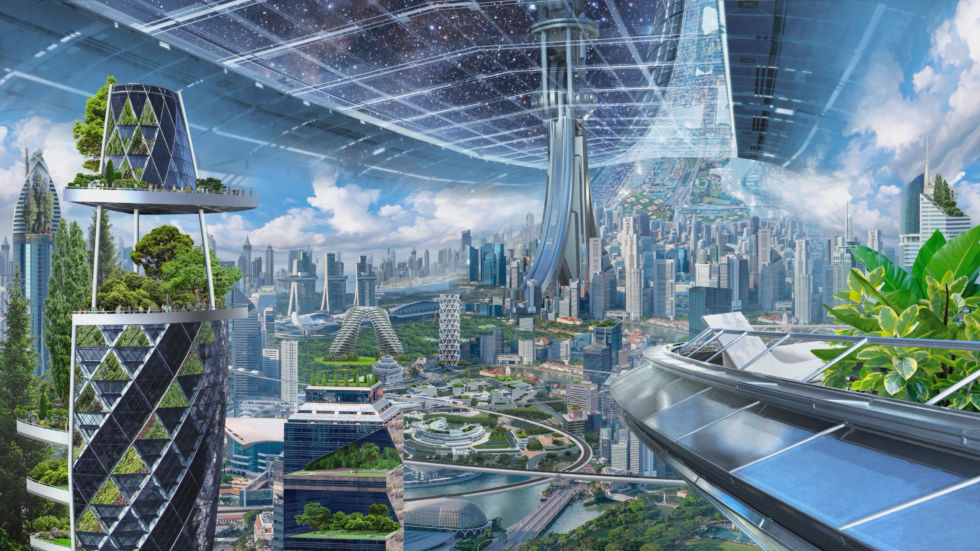 Jeff Bezos took to the stage of a ballroom in Washington D.C to speak about his rocket company, Blue Origin, and how it will influence the future of humanity in space, in a narrative that took the richest man in the world about an hour to outline.

To begin with, Bezos told the audience about the company’s lunar lander, dubbed ‘Blue Moon’, that can deliver about 3.6 tons of cargo and scientific experiments. This lunar lander has been in the works for about three years, alongside the Blue Moon’s engine, capable of 10,000 pounds of thrust.

Blue Origin has plans to hot fire test it during this summer, in West Texas.

From the lunar lander, Bezos quickly escalated to discussing the ever-increasing problem of our energy use, which increases at a rate of 3% per year, with efficiency in computing, transportation and other sectors counted in.

He went to state that only a solar farm the size of Nevada could meet our need for energy and that it would continue to grow until it would envelop the entire planet in order to cover the increased energy use.

Bezos expects us to either perish because of it or live in a world with finite resources and energy rationing, unless we somehow manage to expand further into the Solar System. “That’s the path that we would be on, and that path would lead for the first time to your grandchildren having worse lives than you,” he went on to say.

Our Solar System does not hold worlds that resemble Earth – they lack its atmosphere and gravity and, instead of attempting to colonize them at great cost to our lives and resources, Bezos envisions us building artificial colonies instead,

These colonies are known as O’Neill cylinders, named after Gerard O’Neill, Princeton University professor that made the idea of cylindrical space colonies popular in his book “The High Frontier“, where he described them as free-floating colonies that have access to as much solar energy as they need.

That idea flared up a fire in Bezos’ mind, leading him to become president of the Princeton University campus chapter for the Exploration and Development of Space.

This thought has not left his mind since and, in Washington, he told the audience he imagined up to 1 million humans living in every one of these cylinder colonies made out of asteroid materials and other space resources. He envisioned a utopia that benefits from climate control, without rain or earthquakes, in the likeness of a permanent resort.

He went on to say that it is this generation’s challenge to build the road leading towards this optimistic future and said that there are two things currently holding us back, obstacles which he called ‘gates’.

One of them is low-cost access to space, which Blue Origin is already working on by building the reusable New Shepard launch system, which will fly the New Glenn rocket in space in 2021.

The second ‘gate’ is our dependence on space resources such as water from the Moon, metals from asteroids and energy from the Sun. Again, Bezos assures us Blue Origin has the answer: the Blue Moon lander will detect any information about water ice on the Moon and it will help them figure out how it can be harvested for use as rocket fuel.

Throughout his talk, Bezos insisted that, if this generation is capable of building the infrastructure needed to get us into space and develop a proper economy up there, the generations following it will be more than happy (and well-prepared) to leave behind a dying Earth and start over elsewhere, instead of attempting to fix it.

Being too hopeful about humanity’s future in outer space is not a flaw, if anything, perhaps we would achieve more things, faster, if more of us would be more open to this possibility but the fact still remains that Bezos’ vision for the entire human race relies on the largest mistake humanity has always done: packing up and running away when things become difficult.