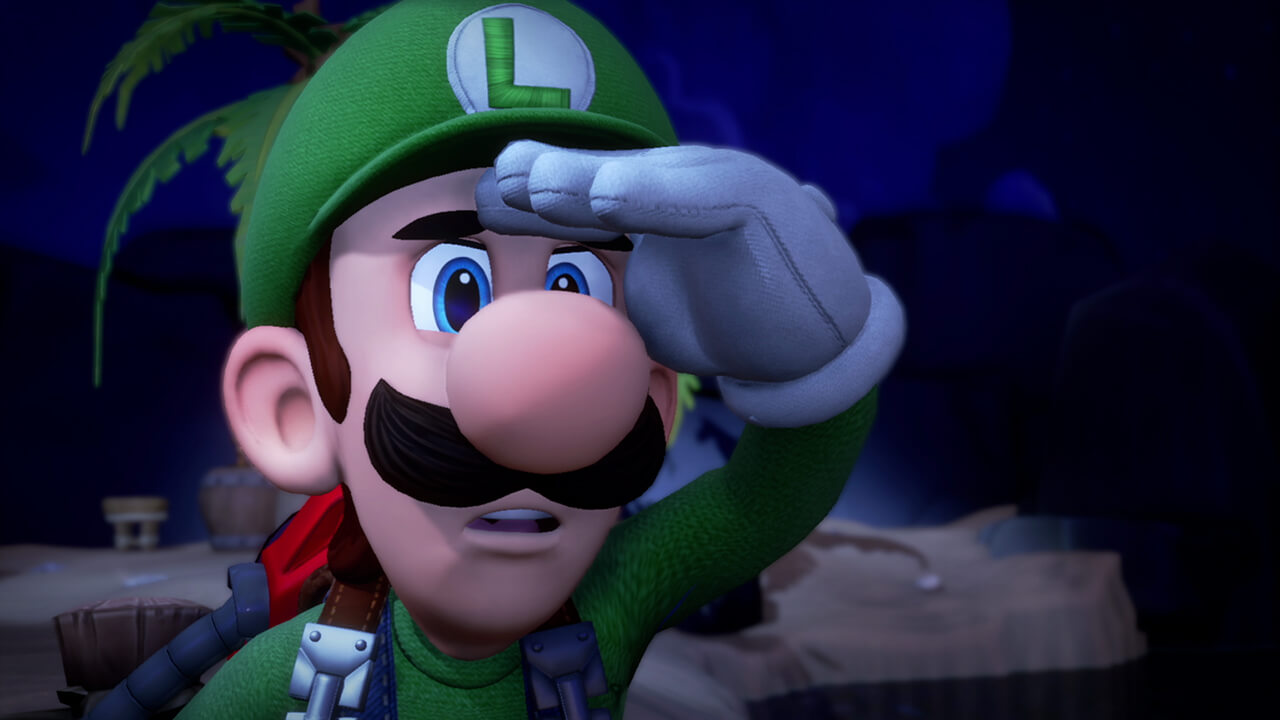 Although Luigi’s Mansion had its humble beginnings on the GameCube, it has grown a large enough following to become one of Nintendo’s premier franchises. Because of this, Luigi’s Mansion 3’s release was one of the most anticipated releases of the year. While E3 demo gave a glimpse of what was the come, the full game brought a lot more to the table. Although much of the new mechanics and game play added to my enjoyment of the game, not everything was perfect.

Typical of a Luigi’s Mansion game, Luigi, Mario, Peach and 3 Toads find themselves invited to a haunted hotel. While all believe they’ll enjoy a peaceful stay, everyone but Luigi is soon trapped in portraits by King Boo. Pairing with E. Gadd and Gooigi, Luigi’s gooey clone, Luigi has to go around the hotel, capturing ghosts in order to save his friends.

Visually, the game sparkles. It has almost perfected the cartoon like style typical of Mario games, taking the splendor that was Super Mario Odyssey and refining it even more. Luigi is incredibly bouncy and springy, his reactions encapsulating his emotional register.

Cut scenes also showcased the work the development team put in to making this game look amazing. Although some scenes rendered poorly on my Switch, most did maintain a Pixar-like visual quality to them.

While the story of the game is nothing new, what sets Luigi’s Mansion 3 apart from its predecessors is its level design. The hotel theme offers an interesting refresher to the “mansion” theme offered in previous games. Instead of finding my way through a mansion, I had to go up a hotel, searching each floor for an elevator button that would let me ascend one more level. 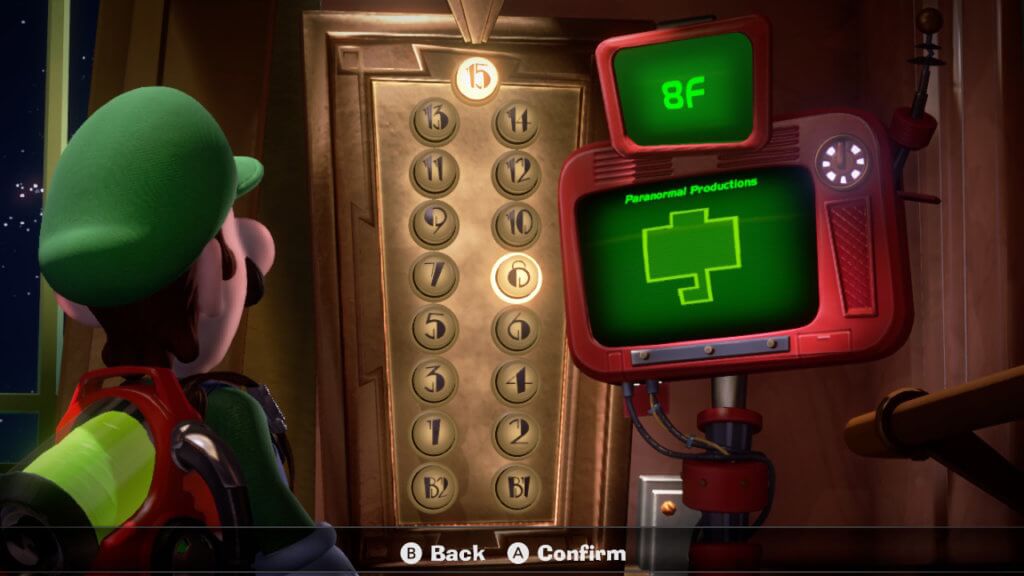 Each floor of the hotel has its own unique style, ranging from a normal hotel floor to a medieval themed stadium. While some of the choices for floors seemed to be incongruous with the overarching hotel theme (looking at you, Egyptian floor), the great diversity of themes offered a wide selection of puzzles and ghost encounters. 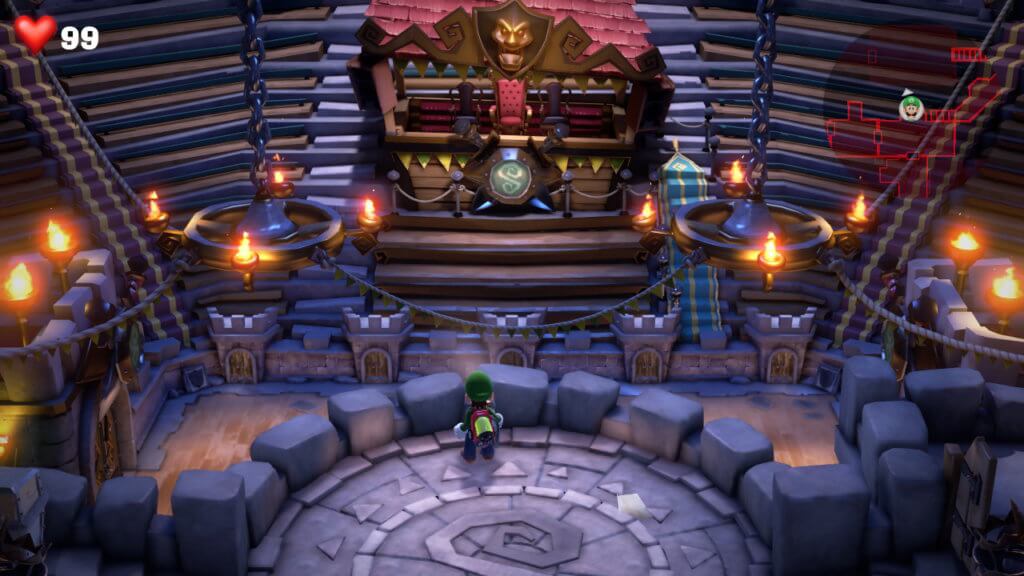 Although some floors were charming and played into their themes brilliantly, others felt a little lackluster. As more of a tutorial, early stages (floors B1-5) failed to excite. All were pretty standard in layout, puzzles, themes and bosses, other than the 4th floor pianist.

Mid game stages (floors 6-11) were probably some of the best. The most fun I had playing the game was on floors 8-11. Each brought with it its own unique theme with pretty enjoyable puzzles to boot.

For example, on floor 8 (Paranormal Productions), Luigi has to navigate and star on several different movie sets in order to enter the final boss battle. None of the puzzles were a chore; in fact, traveling to the different sets made perfect sense with the level and I had a blast finding the little secrets each movie set had to offer. The boss itself isn’t a typical ghost fight either, but set as a scene in a movie where Luigi’s, with Googi’s help, has to save a city from a Godzilla light ghost. Sort of like Pacific Rim, the movie setting made the battle feel larger than life, meaningful, and most importantly, interestingly different from other boss fights the game had to offer thus far. 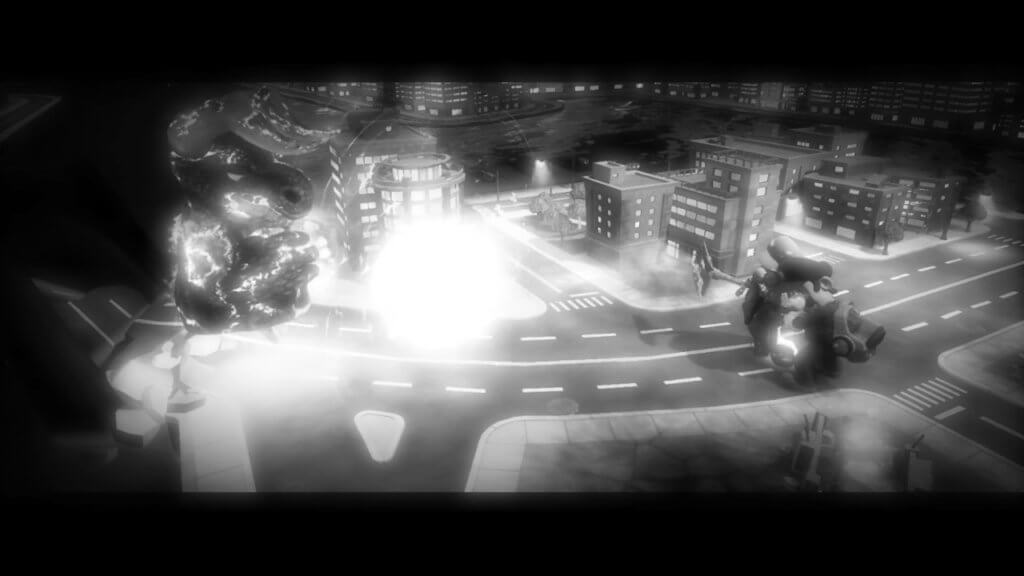 Late game stages (floors B2, 12-15) all benefited from interesting boss battles, but had rather lackluster stage puzzles. Floor 14 (The Dance Hall) is particularly notable for how little one needed to do to get to the final boss; Luigi could essentially walk down the hall to the dance floor without needing to explore any other side rooms.

Unfortunately, this hotel theme worked against the game as well. As I slowly worked my way up the hotel, I quickly forgot the other floors. I never really needed to backtrack and because traveling from floors happened via the elevator, there really was little need to go back to floors already cleared. It was such a shame, given some fun and interesting floor designs were quickly left behind.

One of the main attractions of a Luigi’s Mansion game are its boss fights. Portraits ghosts in the first game offered unique fights for each main boss. Luigi’s Mansion 3 brought this back as, for the most part, the final boss of each floor had its own stage and mechanic. Whether it was pulling the magicians out of their hat, or using Gooigi to clog up a dinosaur’s mouth, or shooting water polo balls back at a fitness ghost, each final boss used the fundamental mechanics of the game in unique ways.

The only bosses that were not enjoyable were the ones that changed how I had to approach the game. The floor B2 (Boilerworks) boss felt cumbersome to play because I had to navigate the arena in a floatie. Not only was this the first (and last) time in the game where the floatie mechanic was used, I had to figure this out while also avoiding spikes and mines. On top of that, the floatie itself was difficult to maneuver. It was slippery to handle, moving backing on the push or pull of the Poltergust rather than traditional control sticks.

The same could be said about why I was so disappointed with the cat mini-boss. To capture the cat, I had to stay completely still facing away from it, letting it approach until I had a small window to stun it with a flash. If I turned around too quickly, the cat would run away and I’d have to wait until it approached again. This slowed down the game tremendously. Additionally, in no other fight did I have to stand completely still and be patient. Even if I couldn’t attack in other boss fights, I had to move around to dodge attacks, memorize attack patterns, and create openings. The cat mini-boss, which I had to do a total of 6 times, was the epitome of a badly designed boss battle. 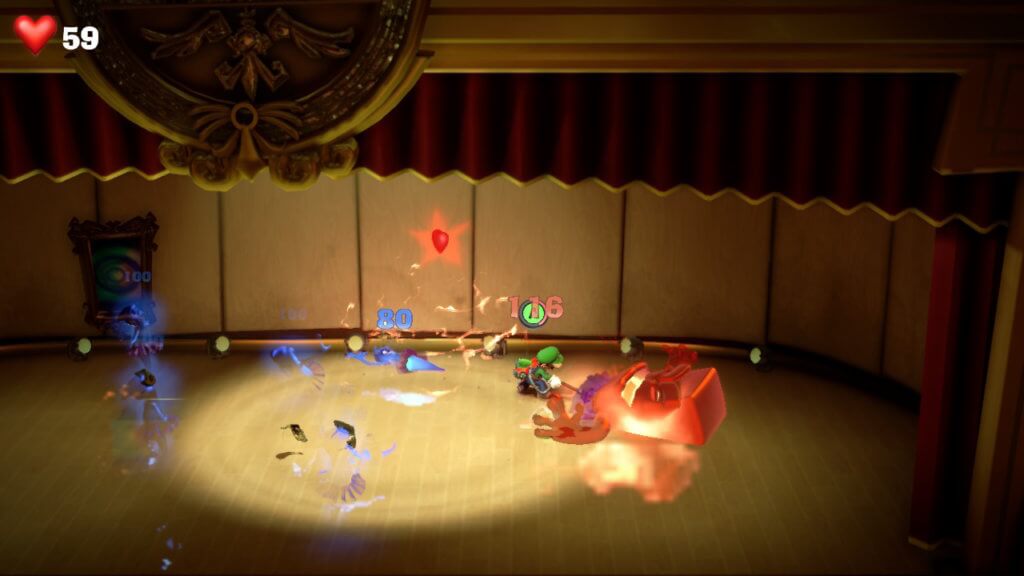 However, boss battles generally offered unique arenas and battle mechanics. On the other hand, regular ghosts fights were, by and large, lackluster. Part of the reason for this was its lack of spontaneity: once a point in the room was passed or a puzzle completed, bars lock the doors and prevented me from leaving the room until the ghosts were defeated. This made these encounters feel scripted and required, rather than part of the natural process of exploring a haunted hotel.

Even the battles themselves had particular repetitive approaches: shine a light on the ghost, then use the Poltergust to capture them. As I moved through the game, enemies would wear sunglasses or hat, preventing me from stunning them. But rather than being a challenge or puzzle, often a simple burst would remove the protection. On top of that, the slam mechanic completely invalidates any challenge. Not only does it do 80-100 damage to a ghost, any other ghost caught in the slam loses their protection and health. They will also be stunned, meaning I was able to chain capture after capture without much issue. Slamming ghosts into each other turned the hectic push and pull capture system from the original Luigi’s Mansion into a relatively banal affair. Repeat this 3 or 4 times a level, and by the 15th floor, capturing these common ghosts became a chore.

Finding Boos throughout the hotel is also a series staple. Capturing Boos has always been particular tricky; unlike common ghosts, they can’t be stunned and captured in the same way. In Luigi’s Mansion 3, I had to use my dark light to reveal them first. I really haven’t looked for Boos though. There’s no real incentive to do so and because backtracking through levels isn’t required, I also don’t stumble across them by chance. 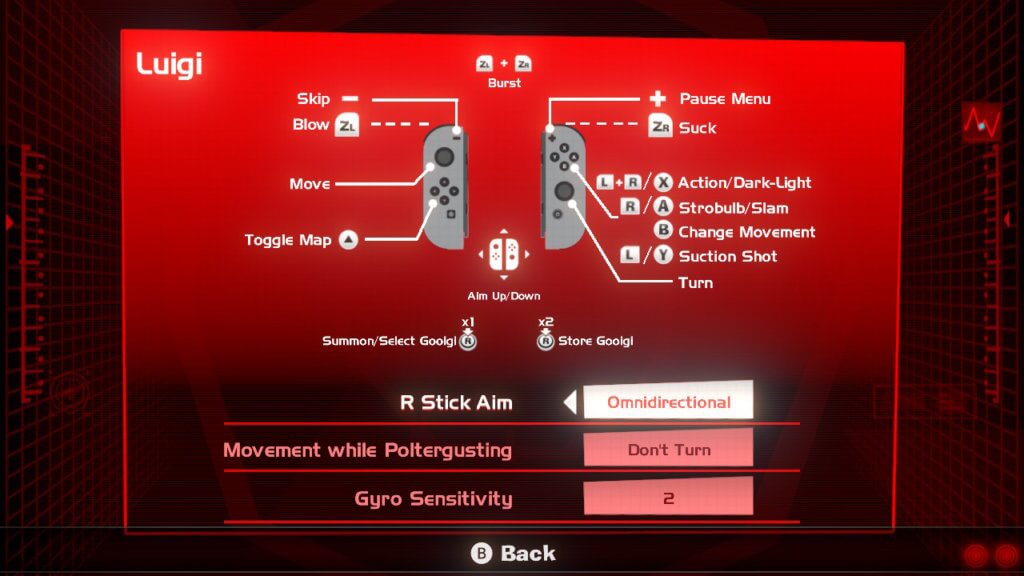 When I unintentionally learned about the shoulder button mapping of the controls, that became all I used. Because of this (and time with the game), controlling Luigi became easier.

There were still some issues: L shoots the plunger and L+R activates the dark light. Thus, when trying to activate the dark light, sometimes the plunger shoots. In high pressure situations, this became a burden. The ability to remap controls would have helped.

Overall, the game was fun to play. As a Luigi’s Mansion fan, I felt like this was a blast from the past.

But, it was far from perfect. Although Luigi’s Mansion had an excellent mid-game – the perfect point at which I became used to the game mechanics and controls while also being the apex of the design team’s creativity – the beginning was hampered down by its slow pace and the end by its repetitiveness.

For fans of the series, this game is a great addition to your Switch collection. It has a bit of charm in the way only a Luigi’s Mansion game can have. A strong release for sure, I just wish it did a better job of maintaining solid game play throughout. With more consistent game play and better (or customizable) controls, Luigi’s Mansion 3 could have been a must-have for all Switch owners.