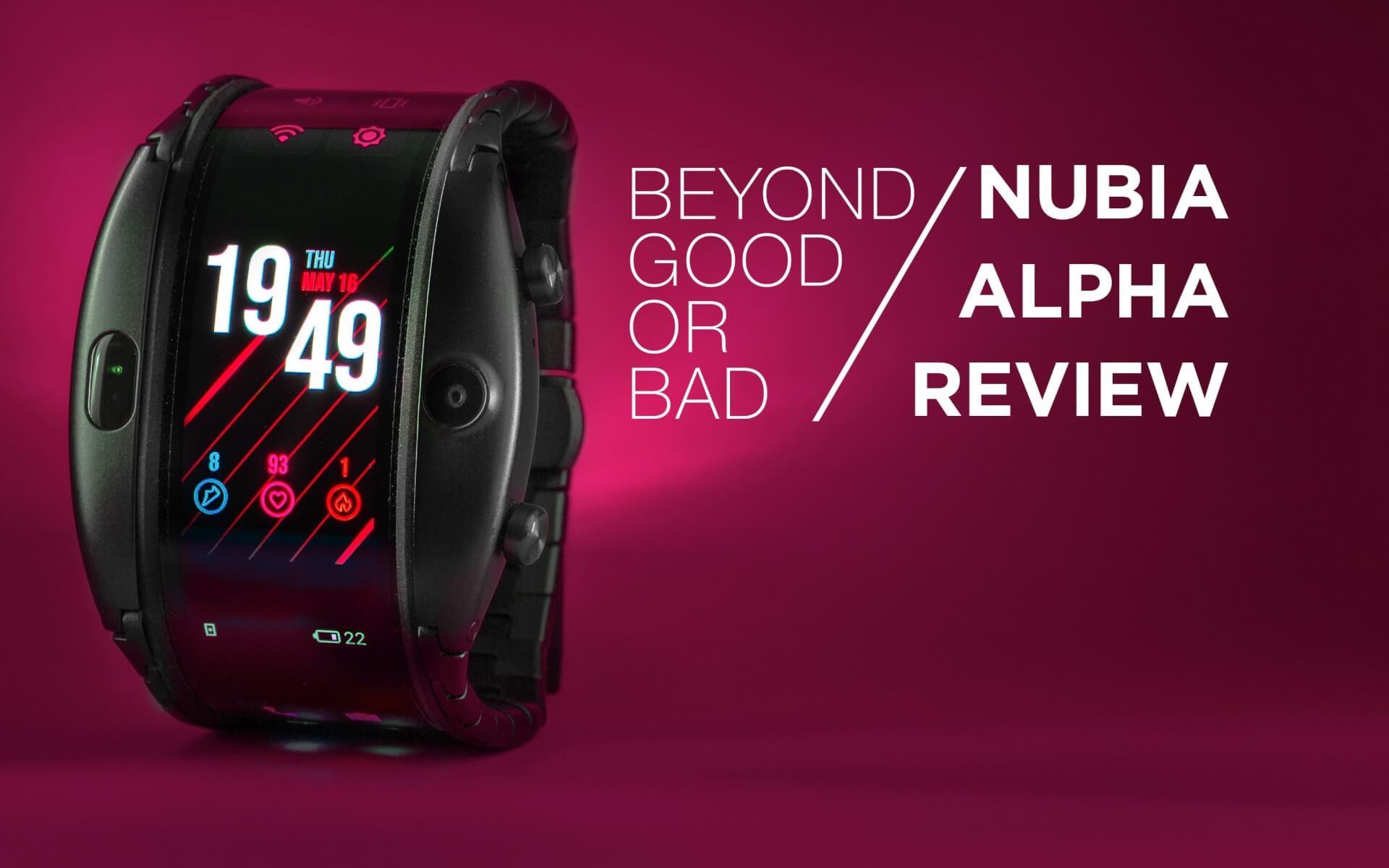 Update 6/14: When asked about the issue with the heart rate sensor that we noticed during our testing, Nubia answered: “[The nubia Alpha heart rate sensor] it is undergoing a fix and will be revised in future updates. We apologize for the issues that occurred on the device. Since Alpha is the first of its kind, it still has room for improvement. nubia is constantly improving the software to provide the best experience possible. “

It is rare that I find myself surprised by a product. After all, we all live in a world ruled by consumerism, where everything I or anyone might desire – from food, to clothes, to gadgets and so on – comes in so many different forms and shapes. Choosing a daily commodity from hundreds is a coin toss, really, unless I happen to be incredibly loyal to one particular brand. On the other hand, when it comes to long-term investments, I do start to look at every detail, weigh in the pros and cons before I swipe my card. Like with a phone (no, I’m not one to change phones annually), a piece of furniture or an espresso machine.

It’s been a long time since I came face to face with a true novelty because we have been stuck in a race of specs and gimmicks, rather than of innovation.

It’s been a long time, therefore, since I had to do a review for a piece of tech such as Nubia Alpha. A tech that I feel opens up a discussion about more than just good or bad, take or toss. You’ll hopefully understand what I mean as you go through my impressions after a week of having the Nubia Alpha on my wrist.

The unit I received was the one that hit the European market, so from the start I knew I had a limited amount of features to test. There was no eSIM support, LTE connectivity, mobile payment,  voice assistant to check – these are only available on the Chinese market.

Because of that, I did not test a wrist phone, rather asmartwatch with a camera.

ONE STRAP FOR ALL WRISTS

From the get-go, I loved the butterfly buckle system.

To be frank, I initially panicked at the thought of putting the Nubia Alpha on, since I have an unusually small wrist. Couldn’t you get the smaller size?, you ask. Well, no; see, unlike other popular smartwatches, this one does not come in two versions – one for women, the other for men. It does not have different case sizes or strap widths.

That is why I was happy to see that I could remove several links from the matte black band without having to use any tool but my hands. I simply dragged a slider and took the links off!

Once I got around that, I paired it with the Nubia Wear app on an Android phone. At this point, I found its first drawback: there was no Nubia app on iOS! It seemed unbelievable at first, but I couldn’t pair it with my iPhone (my colleague had the same issue), so if you’re an iOS user, definitely wait for App Store to add it before you go buying one.

Once it was on, I could definitely see its core appeal: display. Nubia Alpha has a beautiful, sharp OLED display that wraps around your wrist without noticeable breaks or the after-effect of elongated icons. The second thing I couldn’t ignore was the size of this thing. It’s definitely bigger than any watch I have worn, but not necessarily in a bad way.

Personally, I prefer a sturdy watch to the very light, very narrow ones many watchmakers design for women, so I got used to its weight and feel in a day. In the same time, I never did expect for Nubia Alpha to feel like a normal watch in the first place – it would obviously be bulkier than one, due to the camera, sensors and display.

I enjoyed the raise eyebrows and furtive glances it brought, because people’s excitement for new tech is what propels this industry to always move forward and faster than any other.

Many reviewers complained about its weight and size during bedtime. Sleep tracking being a key function, it makes sense to wear it at night, and I did. What was my take-away? If you’re tired enough and love sleep as much as I do, you won’t even feel it on your wrist 😉

HEART RATE READING – ACCURATE OR NOT?

By the next morning, I had gotten used to the Nubia Alpha on my wrist. After a cup of coffee (and a bit of work-related stress), I wanted to see if my heart rate was a bit elevated. Scrolling through the menus was a breeze, as the touchscreen moves impeccably, and once I got to the heart rate function, Nubia Alpha didn’t disappoint. The reading felt accurate but I didn’t know for sure until I compared it with the Fitbit Alta HR. Indeed, both showed the same results.

Side note: days later, the same feature worked poorly for one of my colleagues who took it for a spin. At first, it seemed to not show the measurement in real time and then, it stopped showing it completely. We will reach out to Nubia and see if they have an explanation as to why that was.

It was time for customization. By just swiping down on the home display, I got to a kind of shortcuts menu where I enabled gesture control. I was eager to see how responsive Nubia Alpha really was, after being impressed by its swiftness to wake up when I raised my hand.

Turns out, gestures work almost flawlessly. Many of you will find touching the display more intuitive (as some of my colleagues did) but I personally liked the Jedi-style commands, gesturing from side to side and up or down to move through the menus. If you do decide to interact with the smartwatch in this way, I can just say you won’t get frustrated by lag.

Next step: choosing a watch face. Now, this isn’t a groundbreaking feature by any means, and definitely not one that will determine your experience with the device. It is however useful for showing at a glance the data you’re keen to track.

See, besides choosing certain graphics and colors for your home display, you can choose what is being displayed. There are lots of watch faces, starting with minimal ones that show just the hour and date to the more complex, that show your steps, calories and heart rate.

Although I ended up choosing the latter, during the first week I did not actually look closely at my calories and steps. While at work, I tested its notification features and selfie camera. I’m glad to say that notifications worked perfectly for me, appearing on the Nubia Alpha in the same time as on my other devices – laptop, smartphone.

While there was no lagging to speak of, I could only see a preview of the messages on the Nubia Alpha’s display to which I could not respond from the watch itself – Nubia Alpha runs on its own operating system, let’s not forget. I also opted for vibrating notification alerts instead of audio, since vibrations are less jarring but you can still feel them at all times.

Talking about audio, I was in awe to see that the watch had built-in speakers that allowed it to play music from your phone’s library (after syncing with the app). Not only that, but the volume was impressive for a wearable, almost in the same league with iPhone X. That said, Nubia offers wireless earphones to pair with the watch so you can listen to music in the crowded outdoors.

Now, the camera really did bring me to a halt. Honestly, I expected very noisy, distorted selfies from a 5MP snapper with f2.2 aperture. Instead, I ended up with several decent selfies, with and without filters. Granted, when you open the camera, the small display does not do justice to the end result, so my advice is to judge their quality after you open them on your phone, through the Nubia app.

Also worth mentioning is the Search Phone feature. Since the watch is paired with your phone, it can place a call to alert you of its position within the room or house you are in.

HEALTH TRACKING IS A NO-SHOW

Yet, Rocky was right: the world ain’t all sunshine and rainbows.

While Nubia Alpha “wakes on raise” promptly, it also locks so fast, you might miss it. To be precise, you’ll lose what you were doing or watching after an idle period of 30 seconds, tops. Again, my colleagues weren’t so lucky as me and complained about the slow unlock and unreliable phone pairing. These are things that can be easily repaired with later software updates though, if Nubia continues the line.

What is equally frustrating but harder to fix is the smartwatch’s health tracking. There is no way to keep track of your previous fitness achievements or sleep information.

The Nubia app shows sleep metrics, counts steps and calories of the day in progress, but not of the days before. Without merging the present with the past, there is no progress to be seen and there are no goals to be set or want to achieve. Since this is a software issue, I’m counting on them to release an update that fixes the problem. Many times, failing to release patches in time or at all can damage a company’s credibility and put their customer care policies to doubt.

On my run, I also realized that my Nubia Alpha could track outdoor and indoor running, plus walking, but no other sport. At least, not this unit of Nubia Alpha.

Finally, while the selfie camera did impress with its stills, I can’t say the same about its videos. The small lens can’t do miracles, so I had to resign myself to square videos of poor quality. Even to attain those, I had to struggle quite a bit, twisting my hand to capture subjects in my proximity or the backdrop.

Now, is Nubia Alpha a perfect smartwatch? Far from it. Is it one you should buy right now? It really depends on what you expect to get in return. Because it runs on its own OS, it won’t seamlessly blend in with your Android device. Since it’s not dedicated to fitness tracking, it won’t have the smarts to track dozens of activities, including your sleep patterns.

However, if you simply want to be part of the future, you might want to give it a try. If a working flexible display on a mobile smart device intrigues you and a watch that takes decent selfies sounds like something you want to support, Nubia Alpha will be on your wishlist.

When a really innovative, category-creator product launches, risks come with the territory. The first iteration won’t work perfectly and that is OK. If you think about it, such products go beyond a good or bad qualification, they are there to change the game, to dare customers to get out of their comfort zone and embrace what comes next.

Nubia Alpha has made the first real step towards the smartphone 2.0, one that you will finally wear and not take along.