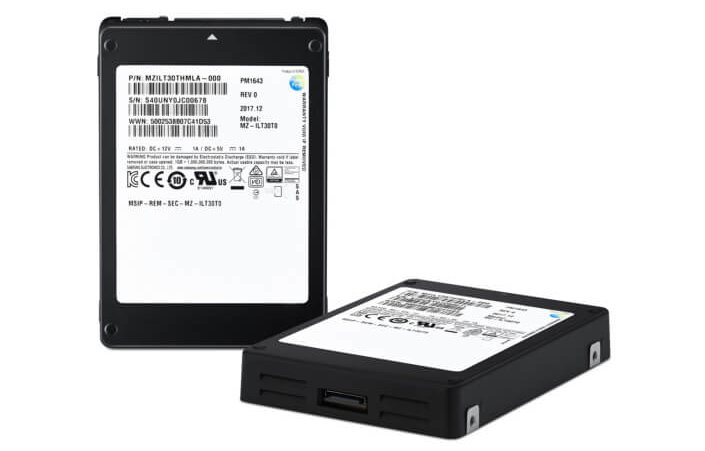 Samsung is once again the record holder for world’s largest SSD, announcing a 30.72 TB SSD model.

The boring-named but epic-sized PM1643 SSD is built from 32 sticks of 1TB NAND flash packages, each of them with 16 layers of 512 GB 3D Vertical Nand chips.

This 30 TB SSD beats the record previously established by… Samsung, of course! The company launched 2 years ago a 15.36 TB SAS SSD drive. In essence, the 30 TB Samsung SSD has twice the storage in the same, slim 2.5 inch frame.

“With our launch of the 30.72 TB SSD, we are once again shattering the enterprise storage capacity barrier, and in the process, opening up new horizons for ultra-high capacity storage systems worldwide,” said a Samsung representative.

How big is it really? The official announcement puts it into perspective:

Samsung also highlighted that the PM1643 drive marks the first time that TSV-applied DRAM has been used in a SSD. The Through Silicon Via (TSV) technology interconnects 8 GB DDR4 chips, creating 10 4GB TSV DRAM packages, totaling 40GB of DRAM.

There’s also no word on pricing, but you should expect a hefty number. The previous world’s largest SSD, the 15.36 TB one, goes for more than $11.000 and is, of course, destined for enterprise use.

For users, there’s always the option to go with a 512 GB SSD that is so small, it fits on a postage stamp. The tiny but capable device is made by Samsung as well.