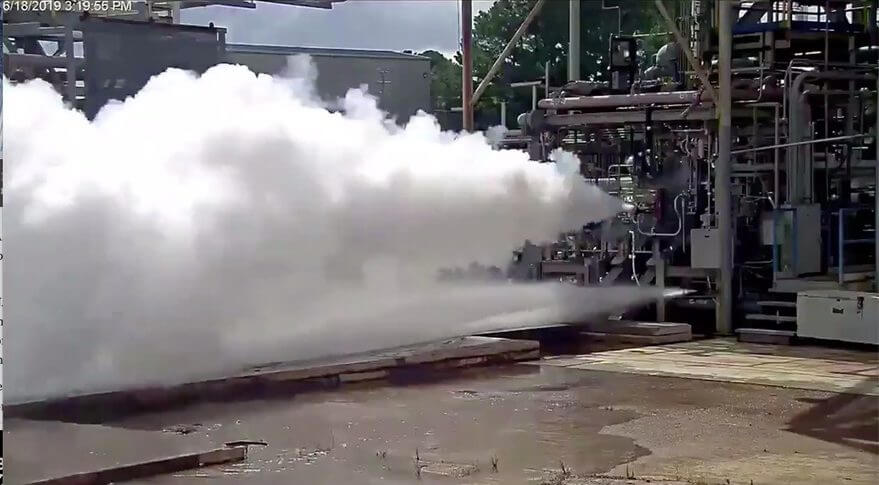 Blue Origin is in business, so to speak. The company just performed the very first hotfire test of the engine it plants to load it’s Blue Moon lunar lander with at the NASA Marshall Space Flight Center.

The test lasted for 35 seconds and the engine, by all accounts, performed admirably.

“Data looks great and hardware is in perfect condition,” Blue Origin founder Jeff Bezos announced via a Twitter post that was accompanied by a video which showed the flames come out of the engine, first in a bright green color and then completely clear.

The green color is the result of the fluid the engine uses to start ignition. Once that fluid is burned away, the flames become clear thanks to what it actually runs on: liquid oxygen and hydrogen.

The BE-7 engine was announced back on May 9th during an event wheref Bezos also unveiled the updated design of the lander.

This engine will be the only one powering up the spacecraft, which will carry 3.6 metric tons of cargo to the Moon. A stretch tank version of it will increase that capacity to 6.5 metric tons and an even bigger version of the lander is expected to carry an ascent stage that will help it with crewed missions.

The BE-7 engine can produce 10,000 pounds-force worth of thrust by using liquid oxygen and liquid hydrogen propellants. Bezos stated during the May event that the company chose this particular combination due to how well it performs, for one thing.

Another little perk is that it allows the lander to make use of on-site resources on the moon such as water ice, which can be converted into hydrogen and oxygen.

“Ultimately, we’re going to be able to get hydrogen from that water on the moon, and be able to refuel these vehicles on the surface of the moon,” Bezos had said during the event.

Blue Origin has set its sights high and the company wants to get even more involved in space faring than ever before: it has already received a NASA contract on May 16th for studies and prototype development for the lunar lander descent stages as well as for the transfer vehicles.

NASA will be sending out a call for lander designs sometimes this summer, as it increases focus on bringing humans back to the surface of the moon.

Considering that Blue Origin is dead-set on doing the same thing and has so far succeeded in delivering, from a technical point of view, everything it said it would, the company will most likely present itself as a worthy rival to anyone else who might want to get involved.