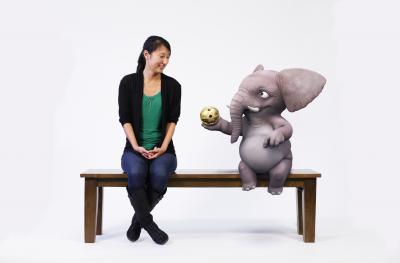 The best part? Users won’t need to wear AR gear or watch a phone screen. They will simply sit down and look at a large display that shows a mirror image of them sitting there. A camera and a depth sensor helps Magic Bench detect one or multiple people. As for the display, it will show cute animating characters coming to say hi or just hang out with you. Even better, this augmented reality experience is shared!

The Magic Bench’s 3D reconstruction uses sensor from an off-the-shelf Microsoft Kinect so, while that technology did not get much popularity, it’s nice to know it lives on.

“We draw polygons using each point in the point cloud as a vertex, creating the appearance of a solid mesh. The mesh is then aligned to the RGB camera feed of the scene from the same Kinect. This alignment gives the mesh color, and completes a 3D reconstructed video feed”, said the developers.

A demonstration video showed a really small donkey coming to inspect a woman sitting on the bench. The donkey then decides the woman is too boring, so the critter goes away. The Magic Bench also uses haptic feedback to enhance the experience, so if the animated character starts snoring, the bench will vibrate in-tune.

The Disney Magic Bech is a cute project, an augmented reality concept that will charm children and grown-up Who Framed Roger Rabbit fans alike.