Little Sophia Robot Wants To Teach Children How To Code 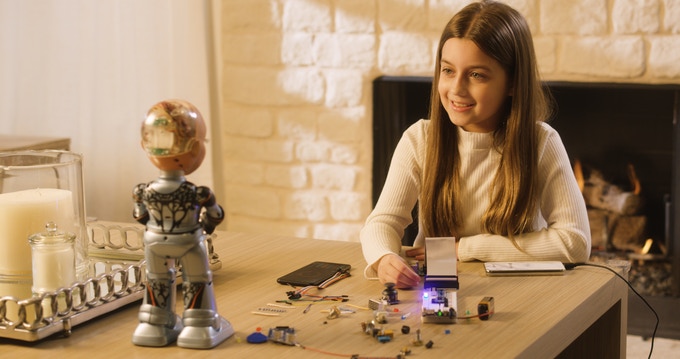 While Hanson Robotics is not a household name, you might know them by proxy, as they are actually the brains behind the notorious Sophia the Robot.

The company has now announced that Sophia has a little sister – she was named simply Little Sophia and is the subject of Hanson Robotics’ newest Kickstarter campaign.

Little Sophia was designed for elementary and middle school students, especially, the company stresses, for girls, and aims to teach them about STEM topics and coding via storytelling.

The robot is 14 inches tall and is capable of about a dozen facial expressions in addition to walking and telling jokes. She even recognizes faces and engages in conversations while following the movements of the person she is talking to.

“Our vision at Hanson Robotics is to bring robots to life. Our team of AI developers, engineers, roboticists, scientists, and artists have designed Little Sophia with the expressiveness and engaging personality that made Sophia the Robot so appealing, further extending the reach of our character-driven AI technology.”

The children can learn how to program the robot by using Blockly and Python as well as Raspberry Pi, which Little Sophia can interface with. They can also use their computer to access lessons on computer vision and deep learning.

In addition to all the different lessons in coding, an AI feature will allow the children to also take selfies with Little Sophia.

All you’ll have to do is download the companion app from either the Apple Store or the Google Play Store and connect to Wi-Fi. From there on the robot will connect via Bluetooth to the device of choice and the fun can begin.