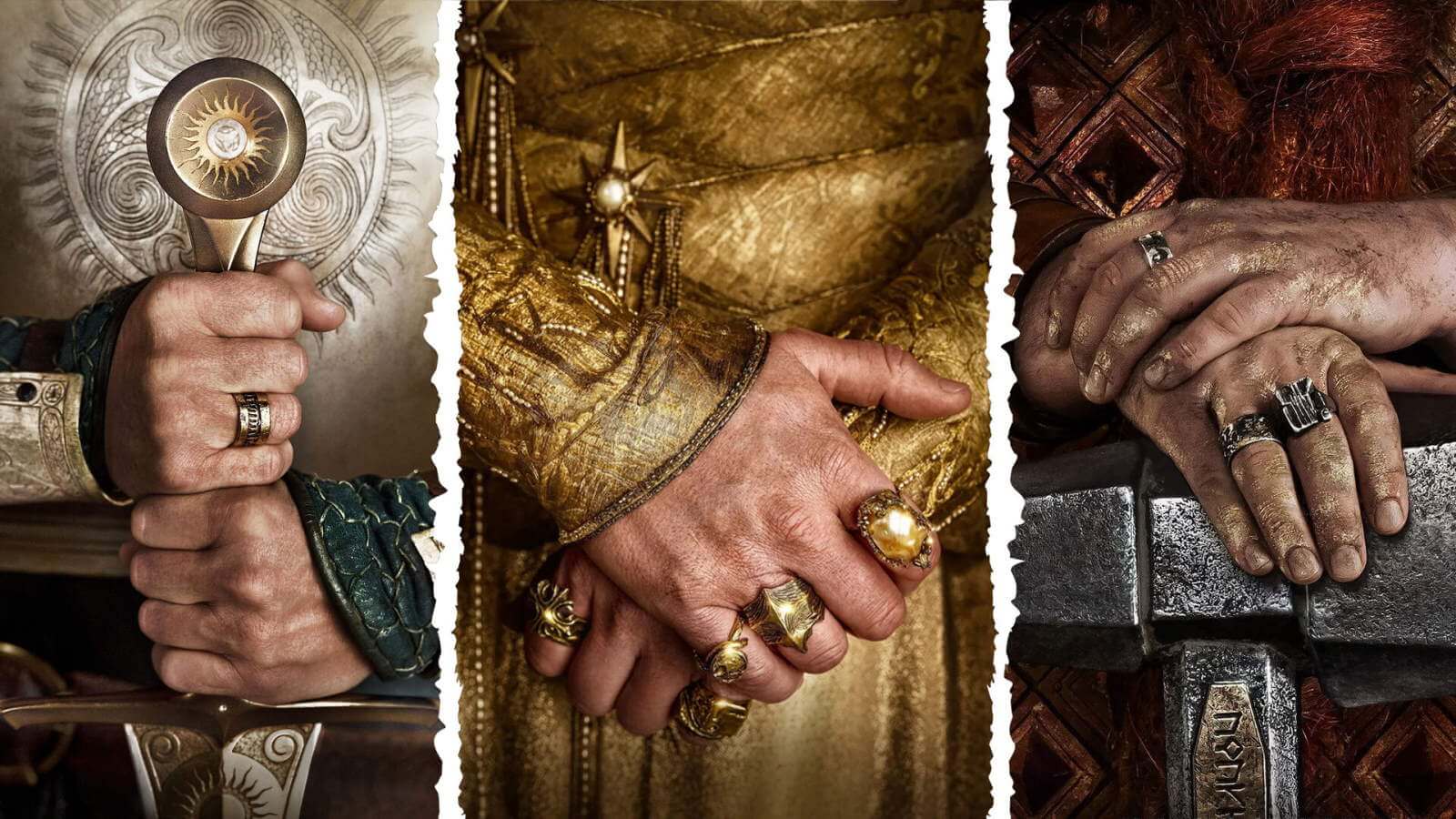 So, the Lord of the Rings Amazon series has one small trailer out and everyone lost their minds saying it’s too woke?

Is it? Like, is it now? Or are these people just doing shameless clickbait to rile up an obviously passionate fandom?

So yes, these are the only images from Amazon’s Lord of the Rings show, which is supposed to have like a 1 billion budget…but based on the trailer, I’m not sure where that money went. Maybe they spent half to workshop the name? The Lord of the Rings: The Rings of Power…shortened to LOTTROP…yeah, Lottrop.

“What are you doing tonight?”

“Oh, just catching up on Lottrop!”

Rolls right off the tongue, doesn’t it?

Still, terrible naming aside…and underwhelming trailer aside, YouTube is already full of commentary on this show – and everyone keeps calling it “woke” and accusing it of killing their beloved books.

I hard disagree. Not only do I disagree, but I’d say most of the people who posted stuff like this are 1. Simply doing clickbait 2. Didn’t even read the books.

So, what is woke? Is it having modern-day politics forcefully injected in the story in a way that DOESN’T make sense?Is it preoccupied with justice, especially for those oppressed? Is it having a diverse cast, which, for some reason, really grinds some people’s gears?

From what I’m seeing, “woke” gets thrown around a lot whenever people disagree with actor choices, like color-blind casting, or when the fans don’t agree with the type of politics the characters spew.

Anyway. To call this Lord of the Rings show “woke” and accuse it of pandering is literally to not have read the source material.

This show can’t be ‘woke’ because that’s the wrong term to use for it. If it has modern day politics, that will still make sense in the lore.

Lord of the Rings Amazon Series & The Silmarillion

You see, this show is based during the best part in the history of elves and mankind, so it’s likely you’ll see characters with so-called “modern” values.

Why? It’s the age in which this show is set – the second age of Middle-Earth.

If you didn’t read Silmarillion, Lost Tales and the other stuff, you’d think that the world of Lord of the Rings, which is the third age,  is the most modern and advanced age. You know, kinda like in real life, where humanity gets better and smarter as the years pass.

However, that’s not the case for Tolkien’s world. The Lord of the Rings takes place in the Third Age, which is almost a post-apocalyptic world, as seen in the intro narration done by Galadriel. Remember that?

By the time Frodo ends up with the ring, everything is pretty much in shambles. After hundreds of years of conflicts, the elves scrammed to the undying lands, humans are a pale image of their ancestors, the Numenoreans, and even Aragorn, the rightful king, would rather fuck off into the wilderness rather than playing around with human politics.

So yeah, the time of Lord of the Rings is less about politics and more about simple survival  – it’s black and white conflicts mostly guided by “we need to keep the orcs away and get some bread to it”. That’s why you see so little political conflict and manipulation, because everyone is just focused on basic survival.

Lord of the Rings: Rings of Power Second Age

By contrast, the Second Age, which lasted for 3 and a half millennia, was an age where mostly everything got better. By the time Sauron started pulling tricks, this world was basically an utopia with universal basic income.

Elves and humans lived in somewhat peace, sometimes working with each other, and since there were no more external threats like a Dark Lord, they mostly turned on each other based on racism, classism and so on. Enter politics and powerplays and all the stuff that makes a good drama.

Elves look down on dwarves because they’re not really God’s creatures but were made by one of the lesser deities. They’re jealous of humans because they can die. Humans are jealous of elves because they’re immortal, so they always have a chip on their shoulder..and of course, elves on elves drama is also at an all time high. You see, the whole of Silmarillion is basically elves fucking themselves up, while the Gods try their best to keep them from hitting themselves with their own hands.

Before Sauron started shit, the Middle Age was kinda like a suburban hellhole where everyone smiles at their neighbors but talks shit behind their backs. After Sauron, they were mostly forced to fight together so that they wouldn’t be wiped out by evil forces.

With this setting in mind, of course the Lord of the Rings Amazon show will have “woke” elements, if that’s what you want to call them. In a world dominated by politics and materialism, cause by God, do the elves love their jewelry, it makes sense that those would be the conflicts.

To be honest, the Amazon showrunners could depict Sauron as Elon Musk or any other billionaire and it would still be fitting to the lore.

Sauron as a rich dude and people trust him because of that  – check.

Sauron appealing to bitter elves who lost stuff because they were greedy assholes – check.

Come to think of it, Sauron was basically the elvish equivalent of Joe Rogan. And, considering this part of Sauron’s story lasts for more than 1000 years, the showrunners have plenty of wiggle room…and challenges, to illustrate it properly.

So yeah, the Lord of the Rings Amazon series can and should be political but that’s not a reason to dismiss it as woke, since the source material IS woke. Don’t get lost in the details about armors, capes and ancient jewelry and miss all that political subtext.

After all, the early seasons of Game of Thrones did politics all day long, and you didn’t see anyone complaining about it being woke.

Lord of the Ring: Rings of Power Issues

But anyway, if you wanna worry about this series, here’s a reason. It’s precisely that Sauron’s biggest story, the influence gathering and leading up to the making of the one ring, takes place over 1000 years.

And here’s my worry for this series – it will end up like The Foundation from Apple TV. This is yet another series that takes places over thousands of years and Apple has proven they don’t have what it takes to  bring it to the screen in an entertaining way. Like, am I wrong here or did they simply not do those books justice?

The Foundation is one of the biggest scifi flops ever and the huge time leaps in it left a lot of viewers behind – so that’s probably what will happen with Lord of the Rings too, if they insist on covering too much time.

The source material reads entirely like a history book, with big events chronicled in sequence but little to no time spent on the characters themselves. That means that anything you’ll see on screen, it will mostly be the screenwriters inventing dialogue and interactions to make the next big event make sense.

And here’s where the Amazon series can fall apart. Before The Foundation and Wheel of Time, which I only discovered thanks to my Tivo Stream 4k, cause they had absolutely no marketing, I really thought the Lord of the Rings series could be a good one.

However, after those atrocious adaptations, I’m feeling a lot more reserved.

Why? Because even though they spent the big bucks, I don’t know where that money went.

Just look at the cast list and tell me if you recognize anyone.

Lord of the Rings: Rings of Power Production

Like seriously, who even are these people? Literally no one in the Lord of the Rings show has a halfway decent credit to their name.

Ok, ok, let’s say it’s possible that they’re great actors and that they’ll surprise us…but what about the writers?

I wanted to find out who’s writing the Lord of the Rings series, a show based on the biggest, most influential book series of all time.

First off you have Jason Cahill, who has the most impressive resume – but I don’t think he’s by any means overqualified for this gig. He wrote 3 Sopranos episodes, 2 Fringe episodes and 4 Halt and Catch Fire episodes. So you have two realistic shows and one sci-fi series, and here he’s supposed to bring to life one of the most difficult books in fantasy. Ok…

Then, you have Justin Dobble, who probably met the previous guy on set. Dobble also has a credit for 1 Fringe episode. He also did an episode of Almost Human, one for Into the Badlands, and like four episodes of Stranger Things. Not bad, but not the huge resume I’d expect to see for someone heading into such a huge project as this. Like, what do you think? Shouldn’t they have more experience?

Anyway, I have high hopes for another of the writers, Gennifer Hutchinson. She has a few Breaking Bad and Better Call Saul episodes under her belt and that’s the type of experience that’s needed here.

I might be nitpicking here but seriously. For the biggest fantasy property in forever…for the show that’s supposed to be Jeff Bezos’ Game of Thrones killer, this is the best team that could be put together?

Like really. Amazon bought the rights to this series for $250 million and said they’d spend a billion on the five seasons they planned, making it the most expensive series ever made.

For all of that, they hired John D Payne and Patrick McKay as showrunners. Both of them have literally nothing on their IMDB pages. Like…nothing.

What do you think? Is this a bad omen or what?