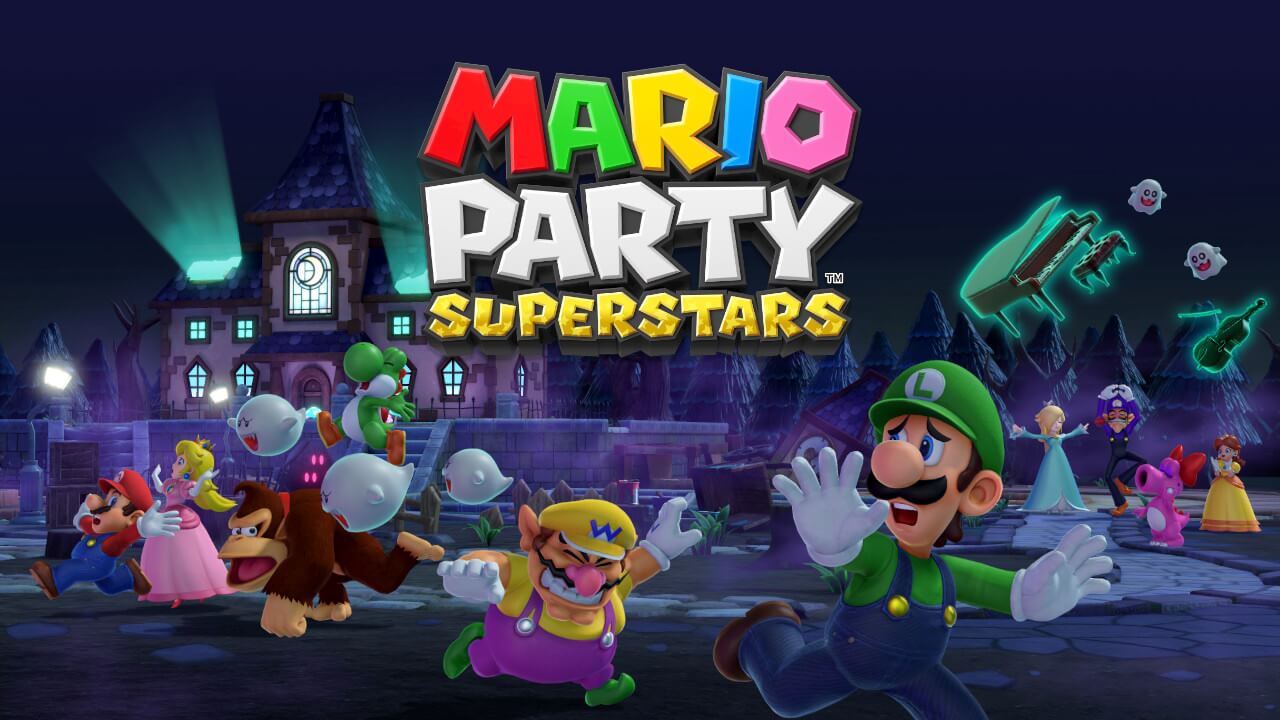 If there were ever a series that needed a return to form, it would be Mario Party. Floundering after the… not so well-received go-together-cart-based mechanics of Mario Party 9 and 10, Mario Party as a franchise looked to be on its last legs. And this is where the Switch’s Mario Party games come in.

Playing both, it is clear that the older games hold a charm Super Mario Party could not replicate. Indeed, Mario Party Superstars is a return the some of the franchise’s greatest boards and games. Drawing boards from Mario Party 1-3 and minigames from across the series, the old formula – dynamic boards requiring strategy, 1-10 dice rolls allowing more movement, and the chaotic randomness of chance time – recall exactly what made the originals so great and the new ones lackluster in comparison.

And while Super Mario Party did try to return to the series to its traditional board game roots, it did so in ways that limited gameplay. Smaller dice rolls, 10-coin stars, and poorly designed boards held the game back from its potential. Superstars, on the other hand, benefitted from taking what worked well in the past and putting on a fresh coat of paint.

Take my favorite board in the game, Horror Land. Basically a carbon copy from Mario Party 2, players have multiple branching paths to take to move around the map. A day and night cycle switches the events happening throughout the board and a warp spot moves players across it with ease. Players can try to take the traditional route, going after the star spawn by carefully using items and navigating the map. Or they can take advantage of the events happening throughout the day and night cycle to take the lead stealthily from opponents. The King Boo statue in the top right corner highlights this risk-reward proposition most dramatically. Not only do players have to aim for the night cycle – one which other players could affect by hitting an event space – they have to come with a Skeleton Key item and have 150 coins. But if the stars align, they will be able to steal one star from every opponent leading to a huge swing of fortune. With a board like Horror Land, there’s no dominant strategy. The strategy is whatever that particular game calls for, with its combination of chance and skill, making each game feel dramatically different from the next. 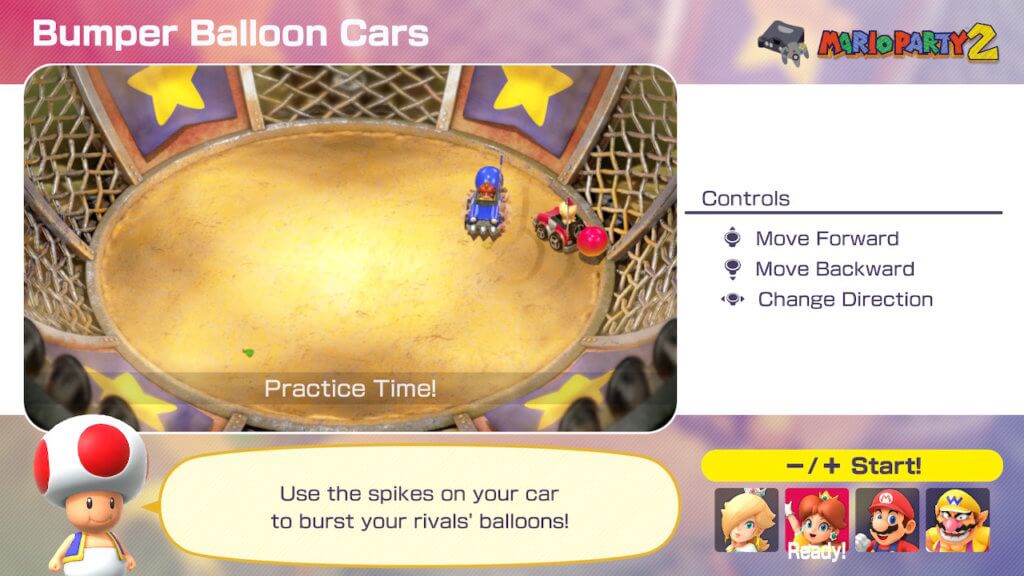 Quality of life features, like practicing in-menu, make the games a lot more pleasant to play especially compared to the original N64 versions.

For what these board games offer in their original form and design, Superstars also comes with a ton of quality of life features to make gameplay even more compelling. Online gameplay for all game modes, adding additional turns mid-game, and quick resume feature for games already started make playing the game more flexible to people’s schedules and locations. New game customization, like only using a selection of mini games or bonus stars, and quick practice for mini-games also improve the quality of the experience. The new graphics and stickers certainly help as well.

Yet, Superstars is not an absolute homerun. The game certainly shows signs of its age with some of the board designs – looking at you Peach’s Birthday Cake. Or just the lack of boards in general makes the game a little less replayable. But more than that, it was Nintendo’s design philosophy which made the game less than stellar. Recently, Nintendo has had a penchant for making games for all audiences. What that has meant is that games often steer towards the easier side in order to be more family-friendly. 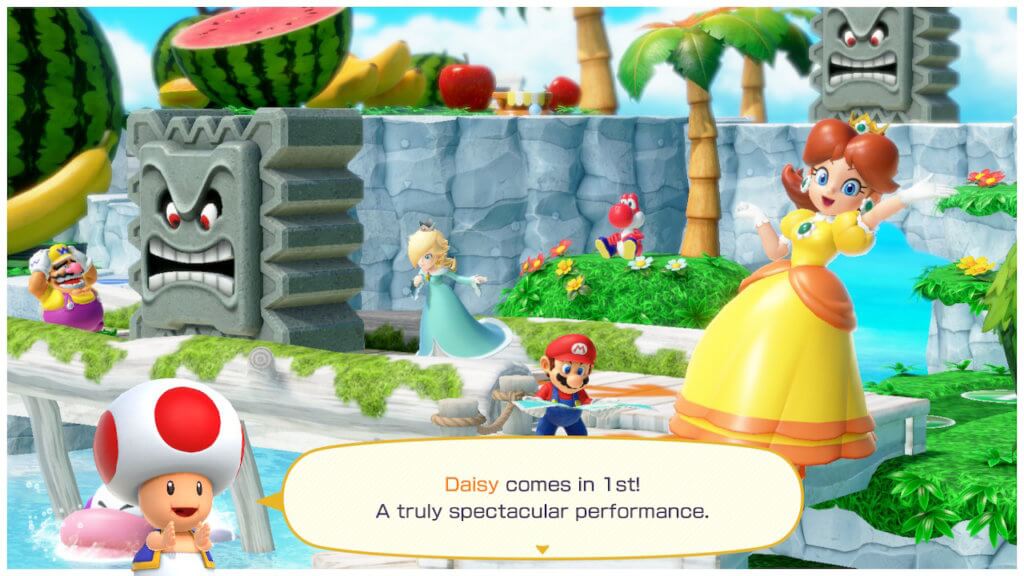 Talking about personality, these gorgeous end game images are generated specific to each game played.

With Superstars, this has meant the addition of player-friendly opportunities that are not necessarily balanced for. Coins are given out more readily, particularly with the inclusion of lucky spaces seemingly every two blue spaces. Double coin mini games also appear with some frequency, adding too many coins into the already overflowing economy. While stars cost 20 coins like they did in the originals, at times there seem to be a few too many coins in circulation, making the game less about strategy and more about who can roll the highest number to make it to relevant star or boo spaces. It was not uncommon for multiple people playing in my sessions to get over 100 coins each, which was an uncommon feat when these games first came out. There are certainly more ways to lose coins, but the game is more lenient than it is punishing.

In making games more approachable for all, Nintendo has also filled their games with padding. Little bells and whistles, celebrations, and dialogue make the game certainly beam with personality, but at the end of the day amount to very little. The amount of time menu-ing within the game was egregious, adding significant amount of time to a game already filled with a lot of waiting around for your turn. For example, there are now so many lucky spaces it feels like two people per turn are bound to land on them. When they do, the roulette wheel spins until it slowly comes to a stop. Then the player is rewarded with the item or coins. It’s not unpleasant, but the time it takes in the menu adds up over the course of the game.

Mario Party Superstars was what Super Mario Party promised to be: a return to the classic, beloved board game stylings the Mario Party is known and loved for. Exciting minigames, chaotic gameplay, and a lot of fun for everyone. While there were some missteps taking in remaking the original boards into this new game, it was overall a good experience and certainly better than Super Mario Party.

But it is unclear where the Mario Party franchise will go next. Does it continue to look back on the games so many loved? Or will it move forward like it did with Super Mario Party? These are two competing visions for the game which seem less and less likely to merge any time soon.