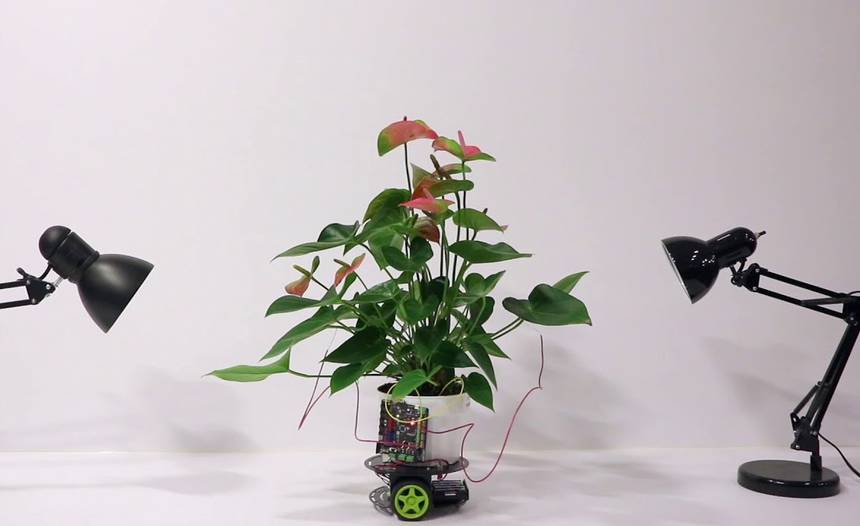 Researchers Harpreet Sareen and Pattie Maes from the MIT Media Lab have created what they call “a plant in direct dialogue with a machine.”

While we might expect the term ‘cybernetic organism‘ to apply to a merge between a human and a machine, this time it was used in relation to a potted plant and a machine. The MIT researchers used the electrical signals produced by the plant to control the robotic platform it rests on.

During the tests, the cybernetic plant, called Elowan, moved toward the light source by itself.

If this confuses you, allow us to explain it all in a nutshell: plants have circuits that transmit bio-electrochemical signals between their tissues and organs. When the plant is exposed to light, is damaged or suffers changes in temperature or soil, those signals are triggered.

These signals, in turn, prompt various actions like the well-known act of turning towards the light.

Knowing all that, the researchers placed silver electrodes into various places on the plant, including the root. The signals the plant delivered were amplified by the electrodes and then transmitted to the robotic platform.

Sareen and Maes tested the setup by placing lamps on either side of Elowan and, clear as day, as soon as the plant sensed light, the signal response immediately triggered the movement that brought the platform towards it.

Sareen hopes that these type of systems could be used in the future to power up electronic systems in a more organic way and eventually make a path for devices that can self-heal and are capable of self-growth.