HMD Global launched its latest smartphone during an event in London just yesterday. The Nokia 7.1 is the upgraded version of the Nokia 7 that benefits from an improved chipset and camera.

The phone will become available as early as this month and it comes with a 3GB RAM with 32GB storage variant or a 4GB RAM and 64GB storage one. It has microSD card support of course, which allows the users to expand the storage on both models to up to 400GB.

The device has a 5.84 inch IPS LCD FHD+ panel and a 1080 x 2280 resolution with a 19:9 aspect ratio. The display benefits of the ‘PureDisplay’ technology that offers higher contrast and vibrant colors. According to HMD Global, the display also supports HDR 10. In addition, the device comes with a dedicated 16-bit engine that is capable of converting HDR in real-time. 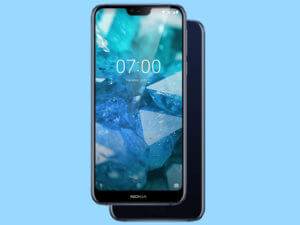 As far as cameras go, the Nokia 7.1 has a dual camera system on the back with a 12 MP f/1.8 sensor and a 5 MP f/2.4 sensor that has a dual-LED flash to accompany it. On the front, the selfie snapper is an 8MP f/2.2 AI camera. This one also comes with something called ‘3D Personas’, which is the Nokia version of Animoji.

The Nokia 7.1 is powered by a Snapdragon 636 chipset and as far as other specs go, it has 4G VoLTE support, USB Type-C and the latest Bluetooth version and a 3,060mAh battery with fast-charging support keeps it going.

It will come with two color variants – Midnight Blue and Steel.

Now, I know you’re all thinking about pricing – the 3GB model will come with a price tag of around $344, while the 4GB option will be roughly around $400, according to the current U.S Dollar rate.