In early January, the Pokémon Company unexpectedly announced they would be remastering Pokémon Mystery Dungeon for the Switch. A cult classic originally released in 2006, fans and newcomers alike were excited for the prospect of having the remastered game on the system.

Pokémon Mystery Dungeon: Rescue Team DX and its original follow the story of you, a human-turned-Pokémon, as you explore dungeons, rescuing lost Pokémon and solving the mystery behind strange and dangerous phenomenon. One of the charms comes from its personality test – answer a couple of questions and the game will determine what Pokémon you are (although you can pick whichever you like if you don’t like the answer). Another is its unique gameplay: turn-based dungeon crawling with battling based on the mechanics of Pokémon’s RPGs (e.g., type advantage, Pokémon specific moves, PP/the amount you can use a move, etc.). 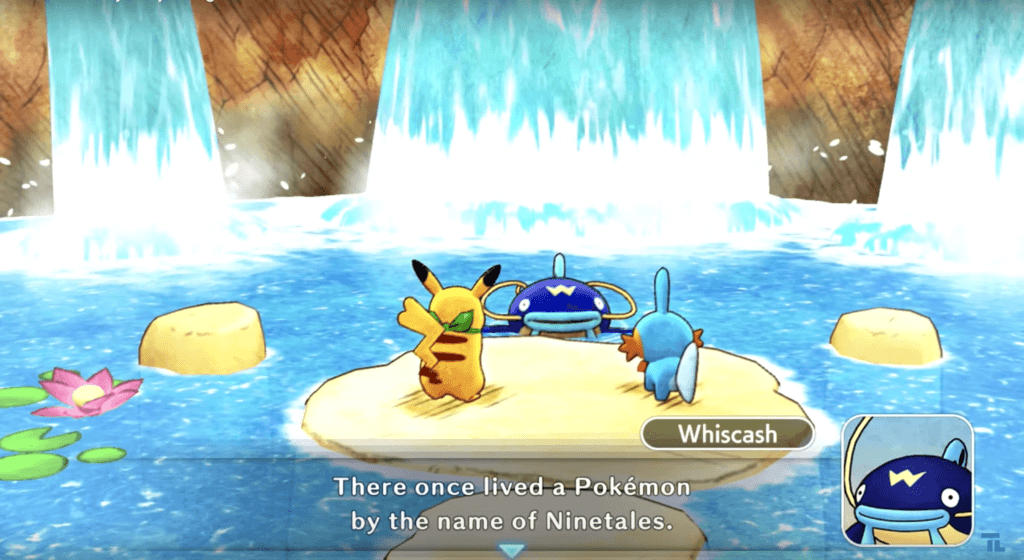 When speaking of this remaster, the most apparent upgrade was its visual style. Rather than the original GameBoy pixelated style à la Pokémon Ruby or Sapphire, the team took inspiration more from watercolor. The Pokémon and the world have a certain cartoon pop to them in a way that is endearing but also perfectly Pokémon.

Other upgrades in the remaster include quality of life changes like: Rare Qualities for Pokémon giving you extra abilities like healing quicker, more Pokémon able to be recruited in one dungeon crawling adventure, and new Pokémon and Pokémon evolutions. The first one, Rare Qualities, truly came to help me in my own gameplay. I had a Farfetch’d with an ability to swap positions with an ally to attack an enemy, meaning my whole party could hit an enemy even if they were normally too far away.

While many fans may likely have enjoyed this remaster, I felt its age (and maybe my own) tremendously. 14 years ago, I was too young and Pokémon spins-off generally were too new that the novelty of the game masked the issues plaguing its dungeon crawling design. I remember playing the game for hours, exploring the depths of dungeons at least 50 floors deep. Now, I became frustrated by even 10 floor dungeons. 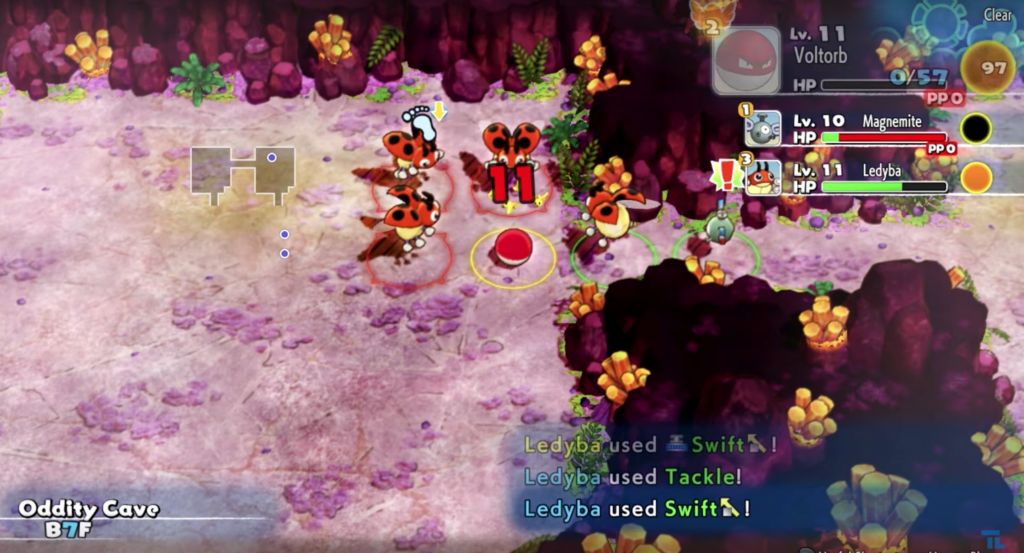 Caption: Ledyba aren’t particularly difficult enemies, but the confusion prevented me from controlling my character for 5 turns meaning they could keep attacking me while I would just watch.

It’s plain to see now that the grind associated with dungeon after dungeon and not much gameplay variance or development drags the game down. This is especially true when random and invisible difficulty spikes force you as a player to either over level (i.e., grind) or push through the dungeon if you could avoid enemies (i.e., grinding, but with luck). These difficulty spikes include: an enemy you didn’t know was a higher level and not being able to run away, a move that one-shots you even as it is not a type disadvantage, and status effects like confuse/sleep/paralysis lasting over 5 turns each.

Additionally, the charm of being one of the first spin-off games is lost now that there are a plethora of alternative Pokémon titles to play. Think Pokkén Tournament DX, Pokémon Go and Pokémon Masters. Although none have dungeon crawling gameplay, they bring out the Pokémon charm without some of the less fun aspects of the Mystery Dungeon series.

Even as it wasn’t my favorite gameplay experience, it’s nice to see the Pokémon Company look at its catalogue of old games and think about ways to bring them back. I just wish they had brought the gameplay up to our contemporary standards as well.