Robot Fish Can Swim For 36 Hours 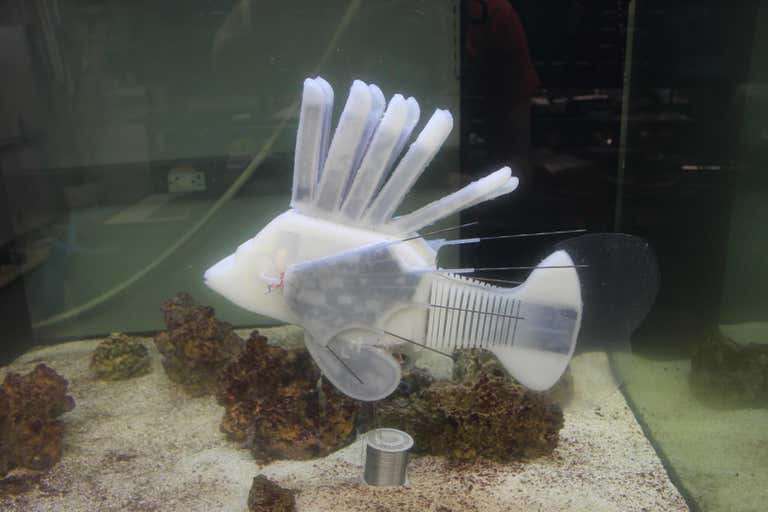 We’ve had our share of robot dogs and we’ve seen some robot cats prowling around too so maybe it was about time someone came up with a different type of robotic pet.

Robert Shepherd, roboticist at the Cornell University in Ithaca, New York, alongside his team, has created a robotic fish powered by a battery fluid which they have dubbed ‘robot blood’.

The design of the fish was inspired by the lionfish, which uses its pectoral fins to swim upstream at speeds of 15cm per minute (0.01km per hour).

One of the biggest hurdles we still have to get our way around as far as robotics are concerned is creating fully autonomous robots that can perform tasks without human supervision.

One of the key issues that needs to be solved to make this possible is energy storage – in order for the robots to function by themselves for extended periods of time, they would need a system good enough to provide them with enough power to function without the need to, ideally, ever recharge. But, for now, even a few hours would be more than enough.

Adding batteries to a robot has been done too many times to count, but they also often increase the robot’s weight which, in return, means that the robot will need to use more power to move around.

So Shepherd and his team decided to go around the issue in a different way: they used a battery fluid to power the robot alongside a powered pump that moved the fins, in order for the robot fish to be able to also move across a fishtank.

The flow batteries, as they are called, are a system made out of two electrodes and a liquid electrolyte that flows between them. The liquid moves around and powers the pumps that move the fish’s tail, dorsal and pectoral fins.

The flow of the liquid greatly influences the way the fish swims as it increases the pressure in certain areas. The mechanism is similar to an inflating balloon, according to Shepherd: the fluid inflates one side of the fish’s tail and in turn, compresses the other, which results in a fluid bending movement.

When compared to the traditional robots that feature a hydraulic-fluid system, the robot fish’s energy storage was increased by 325%. This, in theory, means that the robotic fish can function for up to 36 hours without the need to recharge.

However, the tests the fish has so far gone through only lasted for a couple of hours and Shepherd and his team will continue to further try and improve its abilities. For now, their main point of focus is to invest more time in improving the the power of its movements.