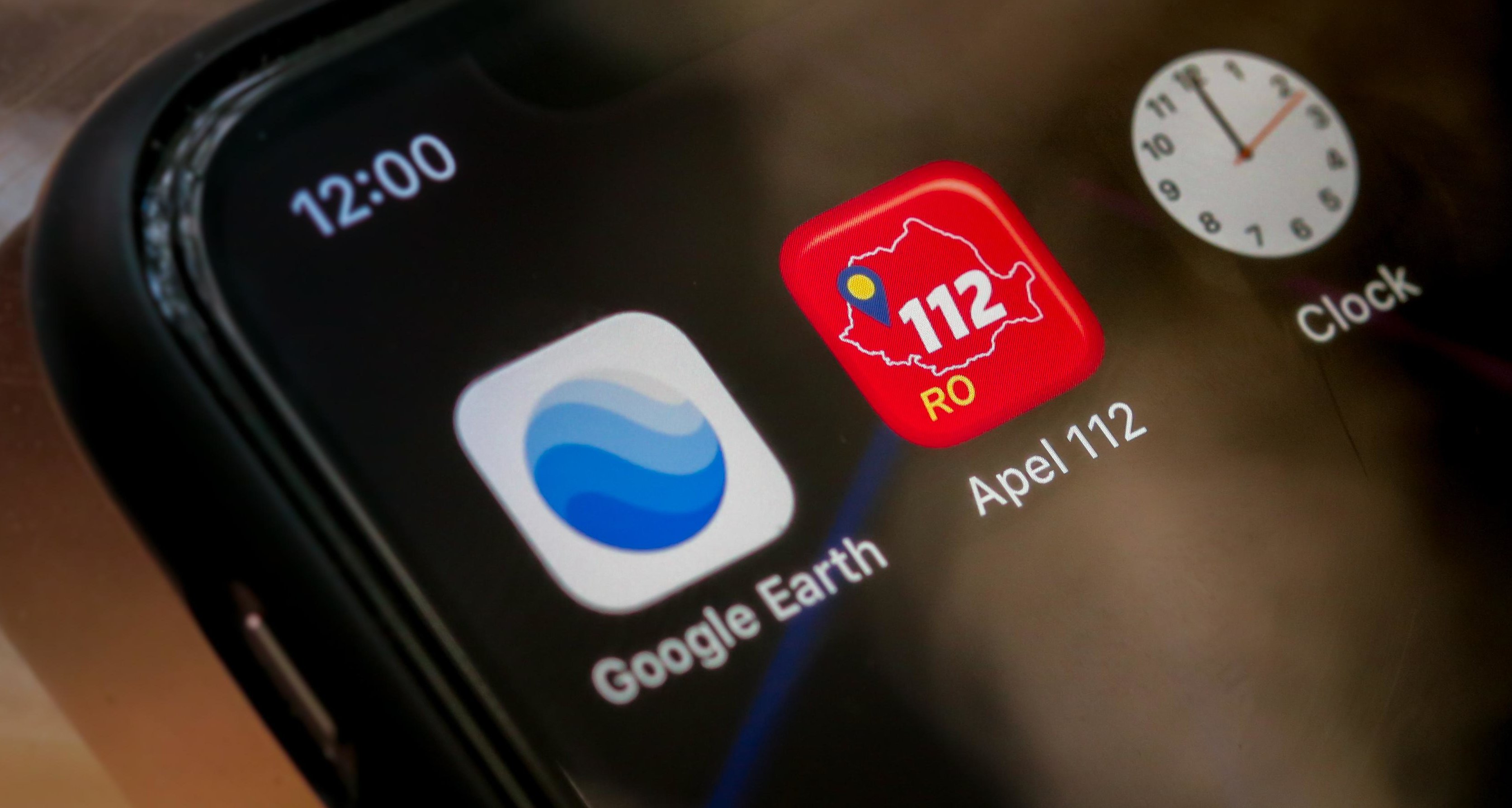 In a world of escapism and entertainment, where technology is used to experience modified realities and provide comic relief, you might be tempted to think that engineers have forgotten that tech can save lives. Or, at least, that very few invest time and resources in such features. Yet, Apple Watches have undeniably saved lives and drones are used in rescue missions. But some people can only afford a smartphone, you will retort. I agree 100%, so finding that people’s lives have been saved by a simple, FREE, smartphone app in Eastern Europe left me utterly intrigued. The name? Call 112 (Apel 112).

POWER WAS OUT, THE OXYGEN MACHINE STOPPED

There are countless people that have COPD (severe chronic obstructive pulmonary dis­ease) or have suffered from pneumonia or heart failure. After being stabilized, the majority are sent home with instructions to go on supplemental oxygen therapy which involves getting the extra oxygen they need from an electrical machine.

Oxygen is vital for survival so imagine what a power outage can do to an oxygen-dependent person. Suddenly, there’s no oxygen left – they’re suffocating. Mere minutes become an eternity, as they powerlessly watch life slipping through their fingers. A short call to the emergency services to describe not only what is happening but to detail their position is now too long.

This is not just a scenario – it actually happened. In Romania. A person, like you and me, yet completely dependent on oxygen, lived this nightmare. Normally, their chances of survival should have been slim to none.

Yet help came just in the nick of time. This Romanian was saved. By whom? An emergency responder from the Single National Emergency Call System, 112, not despite but BECAUSE the person used the Call 112 app.

While 112 is the number any European Union member can call to get help, Call 112 is the official, government-approved, free app of the Single National Emergency Call System in Romania, released by the Special Telecommunications Service (STS) at the beginning of 2019.

Its biggest advantage over dispatch is the ability to send more precise GPS coordinates to emergency services like ambulance, police, firefighters, mountain rescue, and constables.

By being able to retrieve longitude and latitude coordinates it can pin an user’s precise location, ensuring faster and better help in cases like this oxygen-dependent patient, where every second counts.

WHY IS CALL 112 INDISPENSABLE?

What is even more impressive is that in mere months since the launch of the app, Romania’s emergency services have been able to help people from all walks of life in extraordinary circumstances.

I have found out that the Call 112 app was critical in aiding lost hikers but also users who were in a remote or unknown place, in the absence of landmarks or other indicators that could have revealed their position.

That’s not all. A firefighter and ambulance crew was able to extinguish a wildfire that had extended to a car after a user in the middle of a field called 112 through the app. From what I understood, after talking to the STS and SNECS, there would have been no way to pinpoint the location of the user if not for the mobile app.

In another life-or-death situation, a person with severe respiratory issues that was experiencing convulsions lived to see another day by tapping the app icon and getting help right away.

I tested the app myself.

Call 112 is free to download for Android and iOS (from Android 4.4 and iOS 5 versions) so I easily installed it on my smartphone. Once that was done, I accessed it and got a Terms and Conditions page that I had to agree to before I could use the service.

After doing so, I had to enter my phone number; before you ask, this is needed if the emergency services responder needs to call back.

The app doesn’t prompt any other type of enrollment in any other database.

Instantly, I saw my GPS coordinates, in the WGS84 geographic coordinate system, with up to 5 decimals which I was told that translated into an accuracy of up to 1.1 meters at ground level. Speaking of accuracy, the mobile app is completely transparent, showing me the location accuracy.

This information appeared on the screen between a red button to “Call 112” and a green one to “Send position”.

The green button is to be used if the respective person has moved after requesting help, so it can keep the emergency crews updated with the current location.

In order to use the Apel 112 app, a person needs to enable their mobile data or connect to a Wi-Fi network, as well as have their GPS enabled.

Without the GPS data provided through the app, users’ only option is to call 112. When that happens, data from the cell tower bounces around from carrier to emergency responders, only to still be off by more than 50 to 300 meters in the end.

Fortunately, users who don’t have Internet connection can still see the GPS coordinates and transmit them vocally in a call to 112.

CAN YOU USE IT ABROAD? CAN TOURISTS USE IT?

In the event that a Romanian user is in a dire situation while on vacation outside of the country, they can still use the app and transmit the GPS coordinates to the local emergency responders.

Before you ask, tourists can benefit from the app whilst in Romania, too. When asked, the project leaders assured me that English-speaking tourists will be able to use the app since it is translated in English. Moreover, the dispatch has responders that speak various foreign languages so they should have no problem in understanding a caller’s emergency.

HOW ABOUT PEOPLE WITH SPEAKING AND HEARING DIFFICULTIES?

That’s all fine and well, but how can people with disabilities take advantage from this app? The app developers have thought about that, too (my trick question wasn’t so tricky after all.)

Users with hearing or speaking difficulties can still call to 112. In their case, though, the responder will register the calls but hang up, after acknowledging their difficulties from database info (assuming the callers have used the emergency service before.) The responder will transmit the CellID location info and other identification data the mobile carrier can provide and send back an automated message requesting the caller to describe their emergency and precise address in a text to 113.

There’s still room for improvement in this process, I agree. The Call 112 app can’t streamline this process yet but I do hope there will be a way to introduce a chat option in-app soon.

Bypassing a phone call with a responder might be easier but it’s not smarter, as the project leaders have assured me.

Like in many other tech areas, even artificial intelligence, machines can’t replace a human’s instinct and experience-driven, decision-making processes.

Call 112 app has just started to make a difference in people’s lives but since in the tech industry, things move at lightning speed, I had to ask: what comes next?

I wasn’t disappointed by the answers. The Romanian officials spoke up about a series of updates that will help this Eastern European country take the lead in matters of emergency response on an international level.

There were two that really caught my eye.

The first one is the possibility to capture and send images or videos to 112 emergency services.

The second one refers to showing nearby points of interest like police stations, hospitals and such on the user’s in-app map.

How great would it be to show responders exactly what will they be facing? Or send the police a video of an incident while it’s happening, knowing they will receive it directly, no third-party involved?

Besides these two, the government officials are also considering adding a feature that automatically generates and sends GPS coordinates when the user texts 113.

They are taking into account non-threatening situations as well and would love to help users send info about them through the app so the landlines are free for life-and-death calls.

Lastly, Call 112 app might soon integrate the Ministry of Internal Affairs’ RO-ALERT system, which sends a national alert to Romanian’s phones when a extreme weather, floods, or terrorist attacks might endanger their lives.

Providing GPS-enabled location to response centers is not a novelty, surely. Just last year, Apple partnered up with tech company RapidSOS to use their Internet Protocol-based data pipeline, besides cell tower information and Wi-Fi-based data, to make location detection more accurate for iPhone users calling 911. Google has done the same for their Android customers.

Both companies claim phone numbers and other user data goes directly to the appointed 911 response center and is to be used only by it, but like with any third-party service and company, there’s a risk of that info leaking.

Moreover, the service works if the response center is using the RapidSOS platform.

The Call 112 app is AML-based and works with every response center in Romania, though, because it was developed by the Special Telecommunications Service institution. Although there are no security guarantees for the most suspicious of you, at least the government uses the data and not a third-party app.

Will more countries follow in their footsteps? Will Romania’s Call 112 app double the number of lives saved? Will this app end up being one of the top incentives for landlines owners to cross the mobile bridge?

We’ll have to wait and see. I, for one, can’t wait reporting on people’s lives saved by machines, rather than spooked by them.