The Highway Of The Future Might Someday Start In Georgia 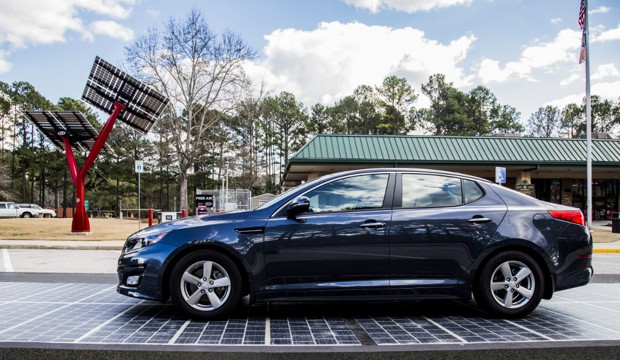 Georgia, somewhere to the edge of Alabama. That is where the living laboratory for the highways of the future might appear, thanks to the Ray C. Anderson Foundation.

The website for The Ray project states that “The Ray is a proving ground for the evolving ideas and technologies that will transform the transportation infrastructure of the future, and it starts on 18 miles of West Georgia’s I-85, and the land and communities surrounding it. By innovating from the ground up, we’re creating a corridor that reconnects and restores us, paving the way to a safer and more prosperous future for all.”

Alongside the Department of Transportation, the foundation is testing a mixture of both high and low end solutions that could make highways greener and safer. The organizers call it Mission Zero: zero carbon, zero deaths, zero waste, zero impact.

Right now, the cars that use the stretch of highway known as “The Ray”, named after Ray C. Anderson, an environmentally-minded industrialist from Georgia, emit around 250 tons of exhaust every day and burn 9.4 million gallons of fuel every year. In addition, much like every other highway out there, it disrupts nearby wildlife and pollutes the waterways.

Now, a new feature is coming into the area: a 50-square meter plot of Wattway solar roads that have been developed by Colas, a French transportation company. Initially, the solar cells had debuted in France on a half-mile road and, though it is not the first road that uses solar power in the U.S, it does save costs and labor as it does not involve digging up any existing roads.

The photovoltaic cells are placed and glued straight into the road’s surface. For now, the power they generate feeds into a visitor center and powers it up, but there are high hopes that, eventually, it will expand onto the actual highway and feed all that electricity into the state grid, powering up highway lighting, charging stations for electric cars and more.

Solar roads are often criticized though, mostly because of durability and costs. It still remains to be seen if the cells will be capable of putting up with the pressure of so many vehicles driving over them every day.

Until solar roads will be set onto Georgia highways, many years will most likely pass, but hope is that one successful sustainable highway might just make room for another.