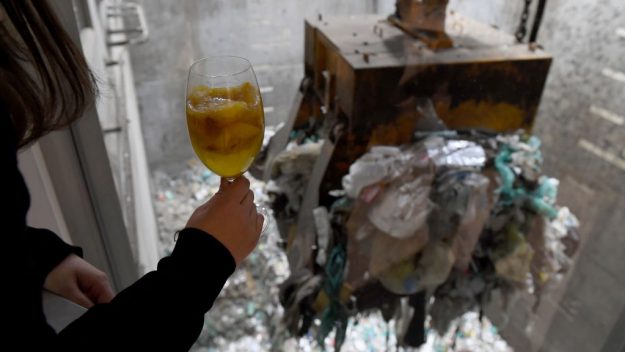 A new pop-up bar has come to life in Tokyo, Japan, called the Gomi (trash) Pit and its name describes the bar perfectly.

The bar was built thanks to local officials in Musashino, western Tokyo, who want to promote their waste and incinerator facility and perhaps get the drinkers to become more aware of all the waste they are creating.

Musashino is going to great lengths to ensure that its residents take care of the environment: while it’s common practice in Japan for people to sort their waste into different categories, Musashino also charges for the garbage bags the authorities collect, in order to minimise waste as much as possible.

By exposing people to the actual sight of the trash they are creating, the local officials hope that the residents will give it more thought than just throwing their trash in a bag and consider the job done and dealt with.

“Many visitors have expressed surprise. They say they had no idea how the waste they produce is being processed. Many people also say that they were shocked to see so much waste being piled up although each household puts out only a bag or two of trash.”

The bar features glass windows that look down directly into the garbage pit that gets piled up for incineration. Every few minutes, a crane dives down into it and grips onto the trash and sifts through it to make sure it will all get evenly burned. It can all be watched as it happens while you enjoy a drink or some snacks.

Gomi Pit will only be opened for a limited amount of time, but the Musashino Clean Centre facility can be visited all year-round and, according to Ayana Seki, it’s encouraged that people come and have a look around.

It cost 10 billion yen ($91 million) to build the facility and to that sum another 10 billion will be required to ensure it continues to operate for the next 20 years.

The facility was designed with visitors in mind and features large windows not only towards the trash pit but also in the technicians area where you can watch the them handle the trash remotely.

Every area comes with guidance and information labels in both Japanese and English.

In addition to all that, one of the windows can also be used as a touch screen information center – by pressing different icons, you can find out about the incinerator’s temperature or the amount of trash that was burned during that day.

A lot of the visitors to the Gomi Pit have expressed worry over the amount of trash they are putting out, especially when they found out that some of the trash that cannot be burned will be landfilled somewhere else in Japan: “We’re imposing the burden on another city,” a visitor stated “We should always attempt to scale back the quantity of waste we produce.”