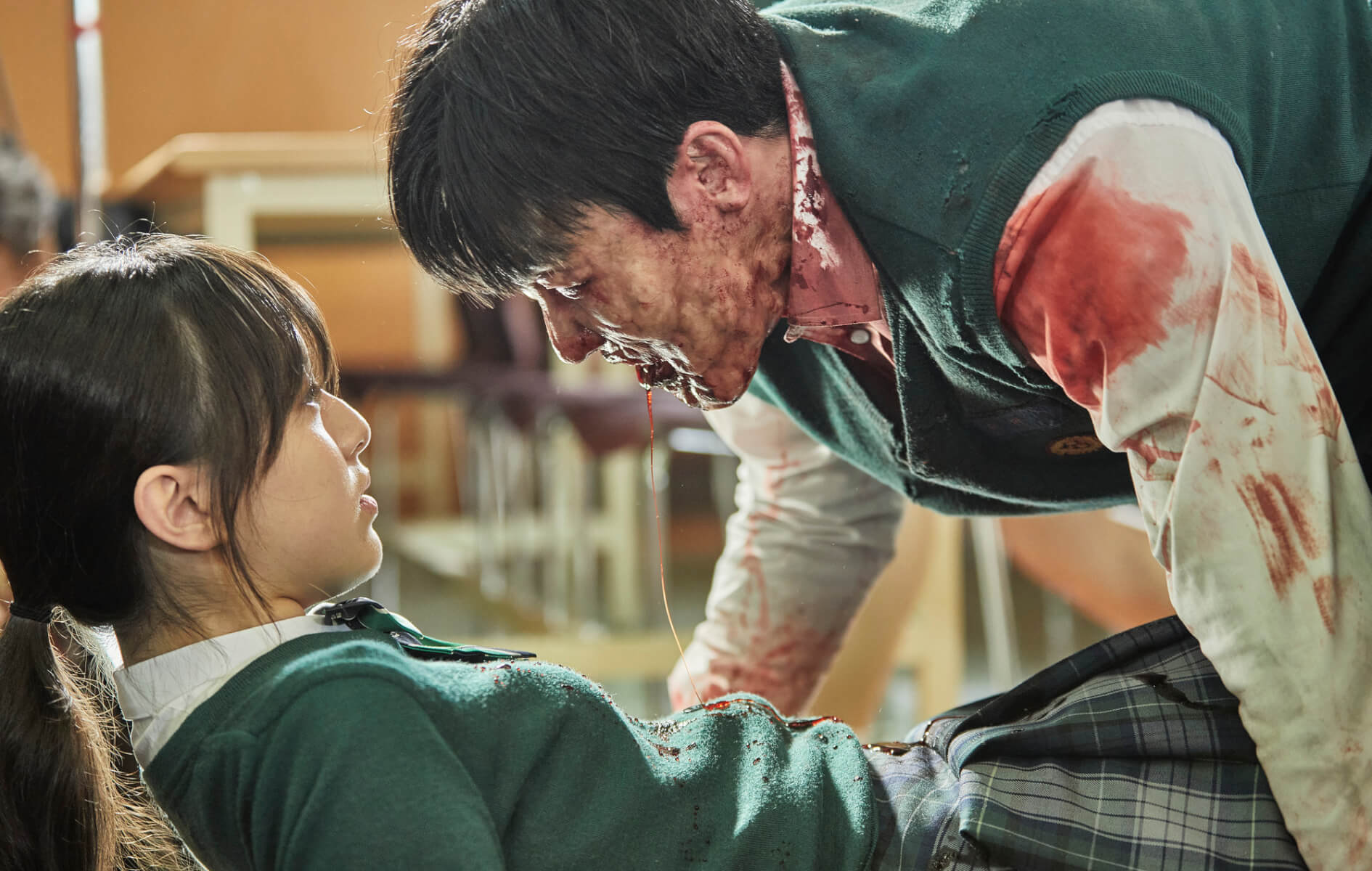 Do you love Train to Busan and want a zombie series that’s just as wild and fast paced? Get ready cuz this one is no Walking Dead snoozefest!

Netflix will soon launch All of Us Are Dead, a show that’s definitely going to become a phenomenon just as big as Squid Game or Hellbound. How do I know? Well, first off it’s a zombie series, so success it’s likely, it’s Korean, so success is guaranteed…and I also read the webtoon it’s based on.

All of Us Are Dead Netflix Premiere

January 28 is the day we’ll all chew our nails watching this one …or, if you’re smart, you’ll also have a bucket of popcorn to have something to help with that anxiety.

So, what do we know so far about this series? Be careful, I’m about to dive into the comic / webtoon it’s based on, so there might be spoilers! You’ve been warned, now let’s see this stuff. The comic is called Now at Our School, it’s written by Joo-dong Jeun, who’s also listed as a screenwriter in the Netflix series…and it ran from like 2009 till about 2011.

Even if they didn’t adapt this story frame by frame, well, this info might give you an idea about what to expect in this series – or at least an overview of how the apocalypse got started in a highschool of all places.

I’m not gonna use many names and apologies for that, but what’s the point in keeping up with like…who’s who… when most of the people in the first episode are gonna turn into zombies? You get my point. Anyway, here’s what happened in the first few comics and what you might see in the Netflix series.

All of Us Are Dead Comics Recap

So basically, the plot as shown in the first 9 comics starts off with a regular highschool setting, just as you’d see in the trailer…if the trailer wasn’t just gore and insanity dropped to 11.

You have kids teasing the unpopular kids…and making fun of the chemistry teacher, who apparently smells really really bad, like something rotten.

One of the kids starts a rumor that the teacher is a cannibal, which isn’t far from the truth, cuz like, all hell breaks loose because of him and some damn hamsters.

The first thing you see is a girl, Hyeonju, bursting into a classroom asking for help.

She then says she has a fever and her body feels weird, while the entire classroom just looks at her scared, waiting for the school nurse to come.

She collapses on the floor in exhaustion and says the chemistry teacher is acting weird and had her tied up and locked up for the past two days.

They all also think she smells just as bad as the chemistry teacher so yea, you know, it’s obvious she was infected with the zombie virus.

But they don’t know that yet, so their teacher, Miss Park tells them to sit tight and wait for the grownups to handle this. Meanwhile, Mr Lee, the soon to be zombie chemistry teacher, is still teaching a class somewhere in the school.

Anyway, the girl, Hyeonju…or as I like to call her, patient zero, is then ushered into the nurses office. She manages to tell them how she ended up being kidnapped. You see, she had stayed after school a few days ago and decided to pick the lock to Mr Lee’s office…as you do, I guess?

Anyway, Hyeonju sees that Mr Lee’s hamsters were having a huge fight, so she decides to stick her hand in the cage to break them up.  Why wouldn’t you? Stick your hand in a hamster cage I mean *eyeroll*

Anyway, Mr Lee shows up and wants to kick her out at first. Then, when he finds out she was bit by the hamsters, he obviously freaks out. He attacks the kid, ties her up for the next two days, and keeps drawing her blood for tests. Hmm…I wonder why he’s doing that *wink*

At this point in the comics, Hyeonju finishes her story and starts convulsing, and it’s obvious what happens next…though we don’t see her biting everyone cuz the story abruptly switches to a new character.

One of the girls who helped Miss Park and the bit chick finally runs into the school principal asking for help, buuut, by that time, the bit chick passed on the favor and chomped on someone else.

The ambulance eventually arrives, loads Hyeonju up and leaves, which basically means the virus is now out in the wide world, not just in the highschool.

While the highschool people are waiting for the cops to arrest Mr Lee, that chemistry teacher who started all of this, the people in the ambulance are attacked by Hyeonju and lose control of the car. You know, classic zombie fare!

Anyway, Mr Lee doesn’t seem all that bad for a dude who started an apocalypse. Once he’s confronted by the teachers, he starts freaking out that the girl zombie is out on the loose, so this means he never meant for the virus to get out. Unfortunately for him, he doesn’t know that there’s another girl she bit right there in the nurse’s office.

So the cops finally show up at the school but they decide they have time for a smoke, while Mr Lee tells the principal and Miss Park everything that happened: how Hyeonju broke into his office, got bit by the hamsters, and is now a threat to everyone. Obviously, they don’t believe him and they waste a lot of time arguing back and forth.

We then skip to the next period, where the girl who was bit by Hyeonju passes a note to Onjo, a classmate. She tells her she’s feeling ill, and if she could get her some medicine from the nurse’s office, so Onjo excuses herself to go.

This is everything that happens in the comics 1 to 8, while in 9 we get some interesting background on Mr Lee. While arguing with the cops, it’s revealed that his family previously went missing and he’s still a suspect in the detective’s eyes. Scratch that – the detectives almost arrest him because a neighbor saw him dragging a bloody bag around.

While this is going down, Onjo, the girl who went to find the meds for her friend, gets the pills but finds no water, so she’s wondering if she should go to the store to get some. That might probably save her life, because the last few panels in the last comic show her friend starting to bleed from the nose and it’s obvious she’s gonna turn soon.

These are all the comics I found translated online and I think there’s plenty of material for a slow burn first episode that sets up the main characters.

All of Us Are Dead: Mr Lee and Onjo

Obviously, since Mr Lee the chemistry teacher is the one who started the apocalypse, and he also has an interesting family background, he’s not gonna go away anytime soon and will probably have a large role to play. Mr Park, the teacher who’s there for most major events, is also probably a main character for a while.

Onjo too, since she’ll probably leave the school to go to the store…which makes it unlikely she’ll be among the first victims. Plus, Onjo is listed on IMDB as appearing in 8 episodes, so that confirms it.

Where the story might go next, I have no idea, since the comics aren’t available in English and the Netflix trailer just showed tons of gore.

What do you think? Can this series deliver nonstop action and stay away from the usual zombie tropes? Actually, the question is: what do you want to see in a zombie show, how can it keep things fresh?

My TiVo keeps highlighting it so I should finish Wheel of Time by the time All of Us Are Dead shows up, so I plan to binge and come back with a review ASAP. Hit like and subscribe to be the first to see it!