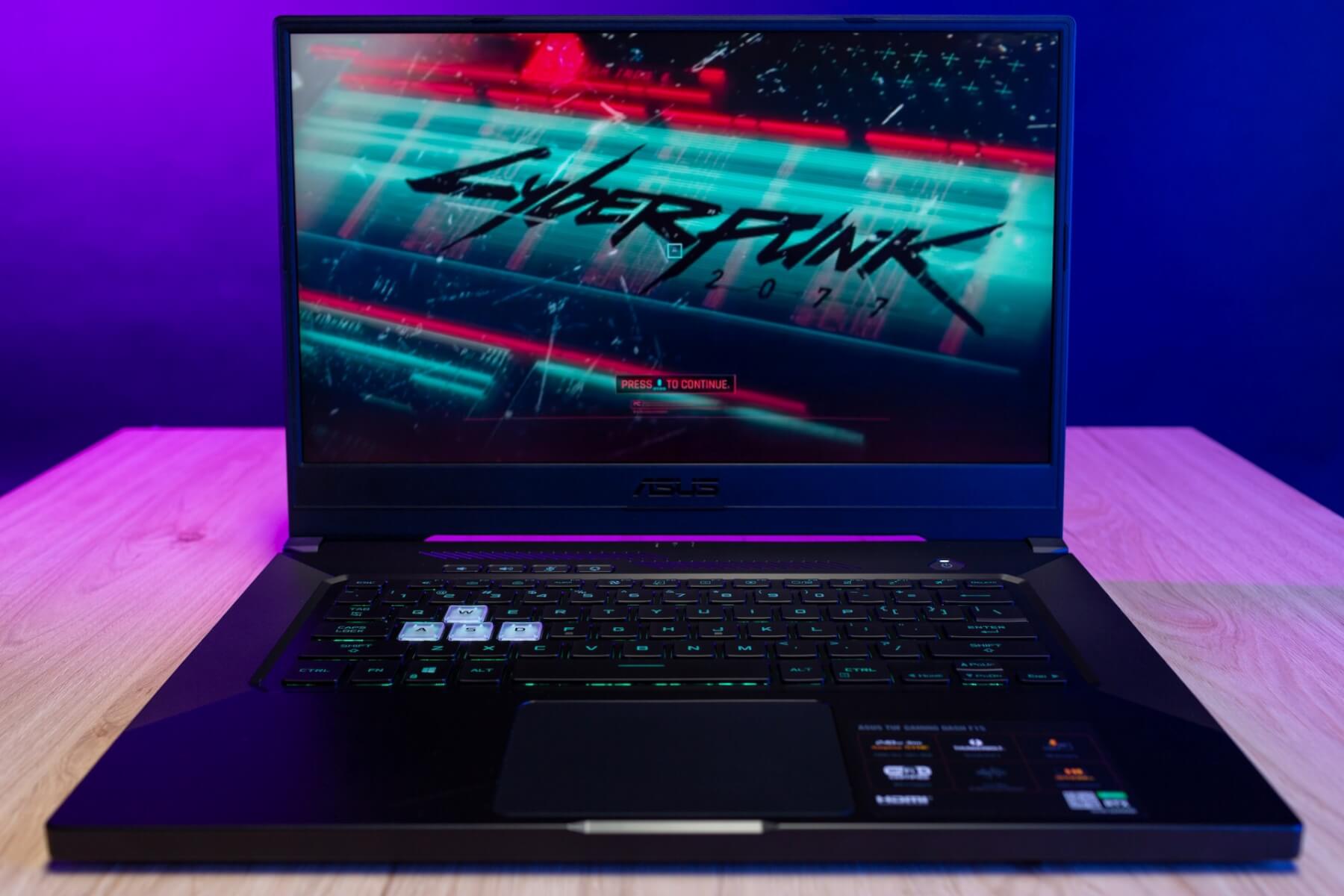 When it comes to gaming laptops, there are a lot of choices out there – and the Asus TUF Gaming Dash F15 stands out.

In a context where it’s pretty much impossible to get a RTX 3000 series card for the desktop,  the TUF Dash 15 is a very valid choice for us.

Read on and see if it fits your needs!

As the name probably already implies it, the ASUS TUF GAMING DASH F15 has the look and feel of a military grade laptop.

It has a sharp, angular case suggesting both agility and ruggedness, with carefully placed air vents on all sides. While it’s made of plastic, it’s quite a heavy one, with a smooth matte finish. The downside here is that, while the matte finish looks premium, it will need frequent cleaning, as fingerprints tend to stick.

Despite the fact that it’s pretty compact, the layout and space between the function and the hot keys is going to give you a sense of comfort and breathability.

When you get to the internals of the TUF Dash 15, it’s clear why Asus made a tough and sturdy case – it’s essential to protect the powerhouse inside.

The TUF Dash 15 comes with the latest Intel i7 Gen 11 chipset paired with an RTX 3000 series dedicated GPU.

The specs list is completed by 16GB DDR4 at 3200MHz,  so this setup can work even with the most power-hungry and demanding games (or badly-optimized ones like, you know, Cyberpunk 2077).

Long story short, the TUF Dash 15 easily handled every game we threw at it, singleplayer or multiplayer.

But more on that later, let’s check out the display.

Since we’re talking about PC games, a good display is essential and Asus made few compromises.

Some might be all about 4K but 1080p works pretty great too ( although not exactly top-of-the-line) if you have a good refresh rate. The jump from 60hz is more than noticeable, with games and video content alike getting a new vibrant feel that makes all the difference.

We tested games we knew relied a lot on ray tracing technology, like Metro Exodus, Battlefield V, or Ghostrunner, to see if the TUF Dash 15 can meet expectations like a stable 60 fps.

Somewhat surprisingly, this gaming laptop actually delivered above and beyond. We found no issues like FPS drop, lag or screen tearing (which we expected based on the specs) but we were impressed on how long TUF Dash 15 can sustain a gaming session.

After a solid 10-12 hours of gaming, switching back and forth between Metro Exodus and BF5, the TUF Dash 15 never had a drop in FPS.

Gaming was the first test we did, since the Dash 15 is a gaming laptop and we couldn’t resist going straight to Steam.

As previously stated, Asus’ new laptop kept a TUF face throughout the marathon and the benchmarks look great.

The results are certainly impressive, on par with high-end desktops.

Since we’re talking about the latest 11th Gen i7 mobile processor and this thing runs a hyper-threaded quad core 3.3Ghz, all the results come from games running at full resolution, with RTX and all other features enabled. 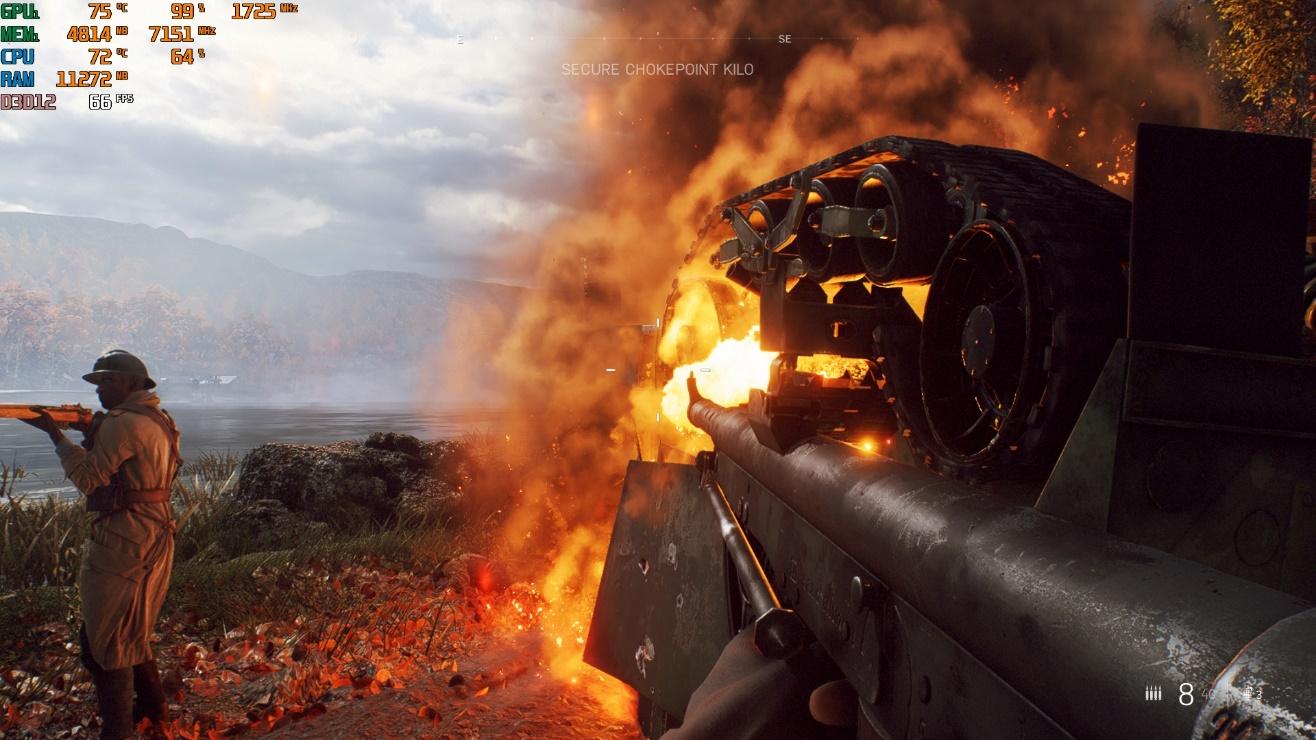 How close is this laptop to a high-end desktop configuration? Close! Very close, actually, which is more important than ever since the desktop components market is pure chaos.

These pretty impressive achievements are also possible thanks to the NVMe storage drive – great read/write speeds and extremely short load times for games.

We tested it with Forza Horizon 4 with all the DLCs, which is a legendary game both in features and in the absolutely frustrating installation time.

As it happens, the TUF Dash 15 had Forza Horizon 4 running in just under 2 hours, a more than heroic feat for this specific game…and a gaming laptop.

Of course, 500GB is nothing when it comes to games…or game hoarding (thanks, Steam!). Fortunately, it’s pretty future proof, since you have 2 NVMe slots to extend storage.

TUF Dash 15 Sound: Truly impressive if you use the included DTS:X Ultra

TUF Dash 15 is powerful both in terms of graphics and sound, though the secret mostly lies in the software.

This gaming laptop comes with DTS:X Ultra and it would be a shame not to use it fully.

This is an object-based audio codec, which aims to create a multi-dimensional sound that “moves around you like it would in real life”.

Playing multiplayer shooters? Listen to this!

The built-in stereo speakers  in TUF Dash 15  are serviceable and good but DTS:X Ultra truly brings them to life in games and on Tidal and Spotify.

The strength of the signal almost doubles, with the highs becoming crisper and more detailed, sliding smoothly down to the low frequencies.

Plug in a pair of headphones and start tuning your audio. DTS:X Ultra offers a wide range of options to get to that desired sound, from a range of presets covering most of all audio types, like music, gaming and movies, down to a digital 10 band equalizer.

If you don’t particularly like tinkering with settings, it’s nice to see a user-friendly interface that helps you find what you need. Since the software auto detects outputs and enables their saved settings profile, swapping playback devices is easy.

We were surprised at the sound’s quality when we listened on headphones but we were truly blown away after hooking the TUF Dash 15 to a pair of studio monitor speakers!

This thing can punch some serious power and delivers external grade high-end DAC quality. Its powerful stereo spatiality produces a distinct difference between sounds and instruments, giving you an immersive experience.

Basically it sounds like you’re listening to your favorite band live, with sounds coming at you from all angles of the venue.

Missed that? It’s impressive (and also rare!) to get that experience from a gaming laptop, of all things.

The Dash F15 doesn’t skimp on connectivity either. You have a Thunderbolt 4 port with 4x times the speed of USB 3.1, which means you can connect it to pretty much any device.

There are 3 USB 3.1 ports on both sides of the case, along with an HDMI, Ethernet and 3.5 mm jack, so it’s ready to become your battlestation.

As we mentioned early, there are vent holes with self-cleaning tech. They’re strategically placed on all sides of the case to keep the airflow straight and dust off the fan fins and the wall of the heat pipes.

The TUF Dash 15 can get a little noisy but we never noticed it overheating. Even after a few hours of Battlefield 5, the palm rest was still somewhat cool and comfortable.

As a gaming laptop / battlestation, it’s hard to find fault with this particular piece.

As a workstation, the only thing really missing is a webcam, since most of us are forced to Zoom a lot nowadays.

Overall, the TUF Dash 15 is a valid choice if you’re looking for a tough gaming laptop.

It’s built like a tank and it holds its ground against most desktop configurations for gaming.

For movies and music, it goes way beyond what you’d expect from a laptop.

As for the portability factor, this baby is a bit heavy but then again, who’s really always on the move these days?