Google has not given up at trying to one-up the iPad Pro and Surface Pro it seems – the company revealed their new Chrome OS tablet during the Google Pixel event that took place today.

It comes with a 12.3 inch screen with slim bezels and a resolution of 2000 x 3000 pixels. It’s crisp and bright and Google branded the screen technology ‘Molecular Display’. Supposedly, it’s more power-efficient than other LCDs out there and, according to Google, it can rack up to ten hours of use in between charges.

The Pixel Slate is covered by the Gorilla Glass 5 and had two front-facing stereo speakers left and right which provide crisp audio. It has two 8 megapixel cameras which are allegedly optimized for low light and video calls.

Other specs include two USB-C ports on both sides and 4K output. There’s a custom keyboard connector as well and two microphones. If you’re really into fingerprint scanning, the power button offers that option as well. 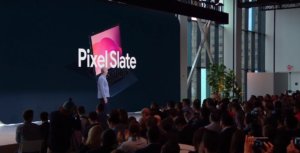 The unfortunate news is that the Pixel Slate lacks both a headphone jack as well as an SD card slot.

The Pixel Slate can be used with your Bluetooth keyboard of your choice or you can opt for the custom one, made specifically for the device, but you’ll have to pay separately for it, as the tablet does not ship with a complementary keyboard.

So the best option for the tablet is Google’s own – the $199 Pixel Slate Keyboard. You can attach it to the Pixel Slate with a magnet and it comes with a full-sized set of keys and a trackpad. The keycaps are circular, which is an interesting design choice that might or might not set up a new trend in the industry. According to Google, it’s also quiet to type on.

Though the Pixel Slate is a tablet, the price tag it comes with is worthy of at least a laptop – the base model, with an 8th Generation Celeron processor, 4GB of RAM and 32GB of storage will cost you $599. The $999 option comes with a Core i5, 8GB of RAM and 128 of storage.

Sold on it, or not just yet? what do you guys think?