LGBT History Month - Did You See This?! #Streamland 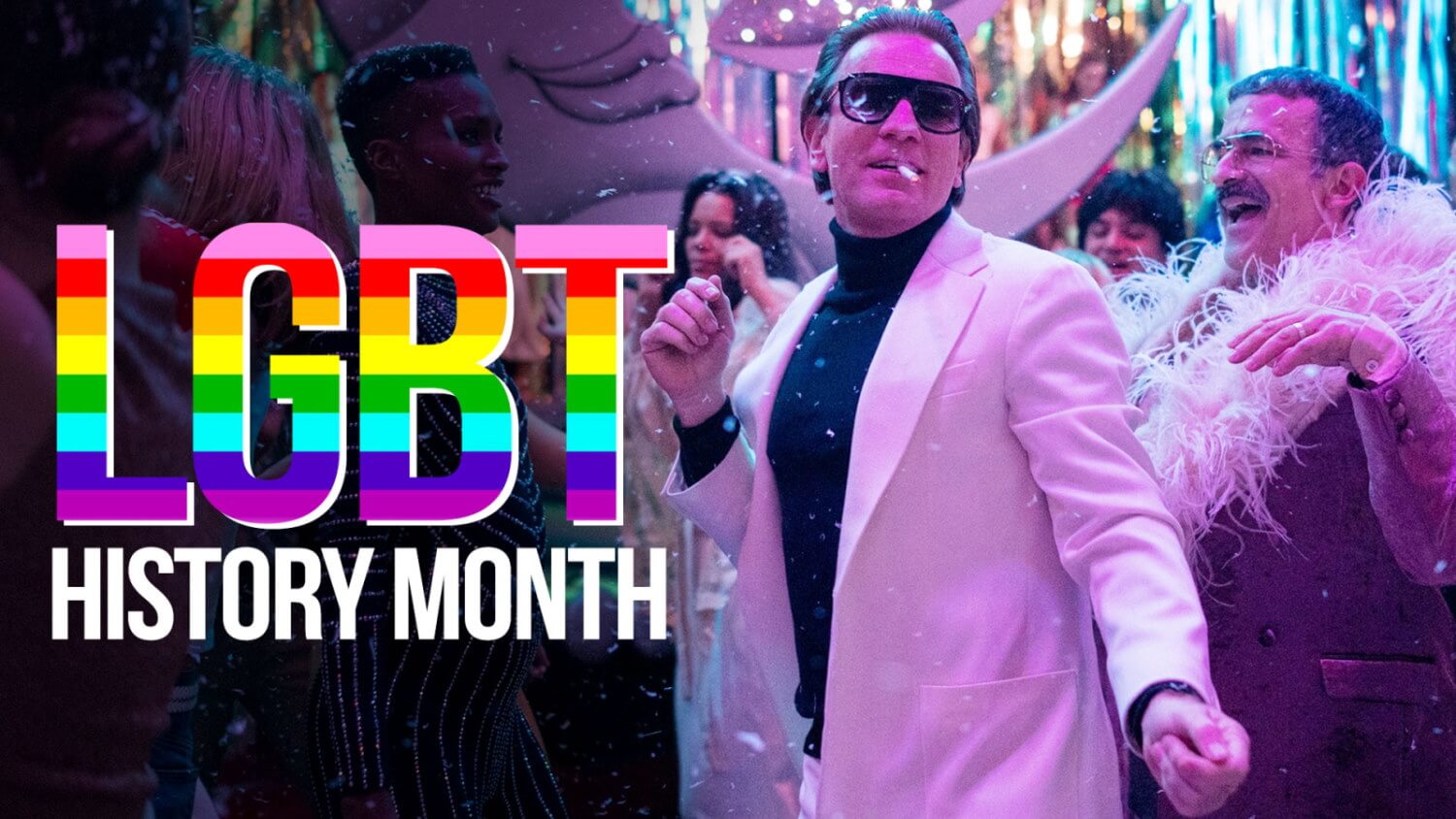 LGBT History Month – Did You See This?! #Streamland

Hey there, are you looking for some great stuff to watch this weekend?

June is almost here and so is LGBT History Month, so I went and did a roundup of the latest…and greatest inclusive shows and movies out there.

I bet you’re gonna love them, so don’t go anywhere!

I’ll start off with the biggest show to come out these days – Halston.

Somehow, even though it’s a Netflix exclusive, the app didn’t think to recommend this one, but fortunately my TiVo Stream 4K picked it up based on my watch history….and here we are!

Halston is the true, although exaggerated story of one of the most famous fashion designers of the past.

He might be unknown now, but back then he was huge, hanging out at Studio 54 with superstars like Liza Minelli and Andy Warhol. Overall, this is a miniseries with a lot more style than substance…but it does have style in spades.

Ewan McGregor shines brighter than even Liza Minelli so, if you love fashion and drama, give it a chance.

If you already tore through Halston and you’re looking for more, there’s another new series that’s pure glamour…and a lot more soul!

It’s A Sin is a British ensemble series made by Channel 4 and available on HBO’s apps.

What’s special about it is…well…pretty much everything.

The story follows a group of gay friends navigating the AIDS crisis in the 80s – and each character is more likeable than the next.

Remember when show creators paid lip-service to the gay community by having like a single, gay best friend to the main character? You know, the sassy one who never actually gets a good plot of their own?

Well, It’s A Sin proves those days are gone. Everyone gets their chance to shine and all of the stories are going to keep you glued to the screen.

Even better, most of the cast belongs to the LGBTQ community, with actors like Olly Alexander, Neil Patrick Harris and Stephen Fry.

Just prepare a big box of napkins, because the end will literally kill you. Well, not literally, but you’ll see what I mean.

Since June is all about LGBT history, let’s see more of the shows that chronicle the complicated, sometimes heartbreaking history of this community and the difficulties they faced. Some of these are pure dramas, some of these are a bit more fun – but all of them are super fresh, educational and entertaining at the same time.

Pose on Netflix also focuses on the HIV and AIDS outbreak, but goes up to the 90s and moves the action to New York. Are you fascinated by vogueing? Then there’s no better show than Pose, which features rival groups as they compete against each other to see who’s got more glamour.

Pose goes from glitter, sequins and laughter to drama that’s going to make your heart leap into your mouth, so give it a shot!

Hedwig and the Angry Inch

In the mood for a movie? How about a classic?
Hedwig and the Angry Inch came out in 2001 but somehow, 20 years later, is still fresh as fuck.

This musical is one movie you can see over and over again, and still find new details and a new perspective.

Hedwig, a genderqueer artist, teaches her boyfriend Tommy all about music and being in a band – only to have him completely steal the show and go on to become a rockstar.

The movie is a series of songs cut by flashbacks into Hedwig’s troubled, but fascinating past, and she’s a hero like no other. I don’t wanna give out any spoilers but, if you ever felt like bad luck wind just blowing at your back, you’ll get a lot of comfort out of Hedwig’s story.

Speaking about bad wind, I can’t think of a darker story than this classic from 2003.

Angels In America is one of the best, and most underrated HBO specials in history.

Based on a play that got the Pulitzer Prize for Drama, this is 6 hours of content you won’t forget for 6 decades.

It’s one of the best stories about the AIDS epidemic, set in 1985, and follows six New Yorkers whose lives intersect and change in unpredictable ways.

If you want to get a good look at the political and social climate back then, and how they shaped the LGBT community, give Angels in America a chance. I don’t wanna spoil it for you but you should know some major players are shown on the screen, people whose influence is still felt today. Al Pacino, for example, plays Roy Cohn, the famous right-wing fixer who represented the former US president….you know who… back in the 70s, when he was doing his …thing…. as a real estate mogul.

I suggest you watch this series like it’s 3 movies, so in about 2 hour chunks, just so you get the most out of it. Somehow, even though it’s pretty recent, it has that dark, glamorous vibe of the 90s…and feels a bit like a David Fincher flick.

Just as heavy-hitting is also this movie from a couple of years back.

Boy Erased is based on the true story of a gay man’s experience in conversion therapy, and what this controversial, barbaric program does to him and his family.

You might know Lucas Hedges, the actor playing the main character, from Manchester by the Sea and Lady Bird…and his performance here is no less memorable.

He’s joined by Russell Crowe and Nicole Kidman, so there’s plenty of talent to go around.

I’d follow Boy Erased with Moonlight, just because I think it’s important to see the same issue from different perspectives.

While Boy Erased has a white, religious perspective, Moonlight shows how struggling with sexual identity intersects with the African American Identity and hood culture.

Moonlight has the main character surrounded by lots of people but the sense of isolation and loneliness just comes at you from the screen.

If you need a break from this tension and want something a bit…lighter to celebrate LGBT History Month, I got just the thing for you, thanks to my TiVo Stream 4K.

How about some SciFi and fantasy?

This dongle surfaced Sense8 for me – if it weren’t for the constant recommendations, I would not have watched it, since it got cancelled abruptly.

If you missed it, you should know it’s made by Lana and Lilly Wachowski, who made the Matrix…so this should give you some insight about the level of mindfuck it puts on screen.

Sense8 explores themes like sexuality, identity, and politics in a way I haven’t seen before or since.

8 people from around the world, previously total strangers, are now telepathically and emotionally linked. Even though they’re hundreds or thousands of miles away from each other, they can feel and learn what the others feel and learn – and they have to find out how this happened and where they got their powers from.

On the fantasy side, I think the Umbrella Academy is probably one of the most binge-worthy shows in recent times.

If you’re older than, say 30, it’s also going to make you reflect on your age and all that. Remember the emo band My Chemical Romance? The lead singer, Gerard Way, actually wrote the comics that The Umbrella Academy is based on.

This show also features Mary J Blige as a time-travelling assassin, so this show keeps on giving when it comes to making you feel somewhat old.

But, if you move past that, it’s one of the most subversive…and impossible to predict superhero shows ever.

The very first episode shows 43 women around the world going from normal to suddenly…. extremely pregnant and giving birth at the same time, at the same hour….so you know what follows is pure insanity.

But if you’re looking for more oldschool fantasy, something like Buffy maybe…or even The Vampire Diaries, check out Lost Girl.

This is one of the first shows to heavily feature LGBTQ people, and not just in secondary characters or predictable plots.

It’s a great urban fantasy series that ran in Canada from 2010 to 2016, and really works if you wanna scratch the vampire itch.

Lost Girl isn’t about vampires…though it kinda is…at least thematically. You see, the main character is a succubus, which explains her predatory nature and the abundance of sex scenes. This succubus works as a detective in a world populated by supernatural creatures. The plot is decently light, with equal parts romance and noir vibes..

I love it because you can binge the first season in like a day, with twists and turns that keep you glued to the screen…but you can also like pace yourself and watch it like a “monster of the week” type of show. If you saw the Dresden Files series or love hardboiled detective, strong female cop themes, you should give it a chance.

And I saved the best for last!

Revry is the first LGBTQ+ streaming app, and they have a lot of fresh content. I binged a web series called Before I Got Famous in a single night, and can’t wait for more.

Before I Got Famous is a pretty hilarious look into both the gay dating scene and the pressures faced by Asian Americans. It follows a Chinese dude who moves from China to the US thinking he’s going to become a Hollywood movie star overnight – well, you can imagine how that might go. From what I’m seeing, Revry is gearing up to celebrate Pride next week, so I bet they have some good stuff on the way.

Did I miss a great movie or show?

Thanks and catch you next time!

LGBT History Month – Did You See This?! #Streamland