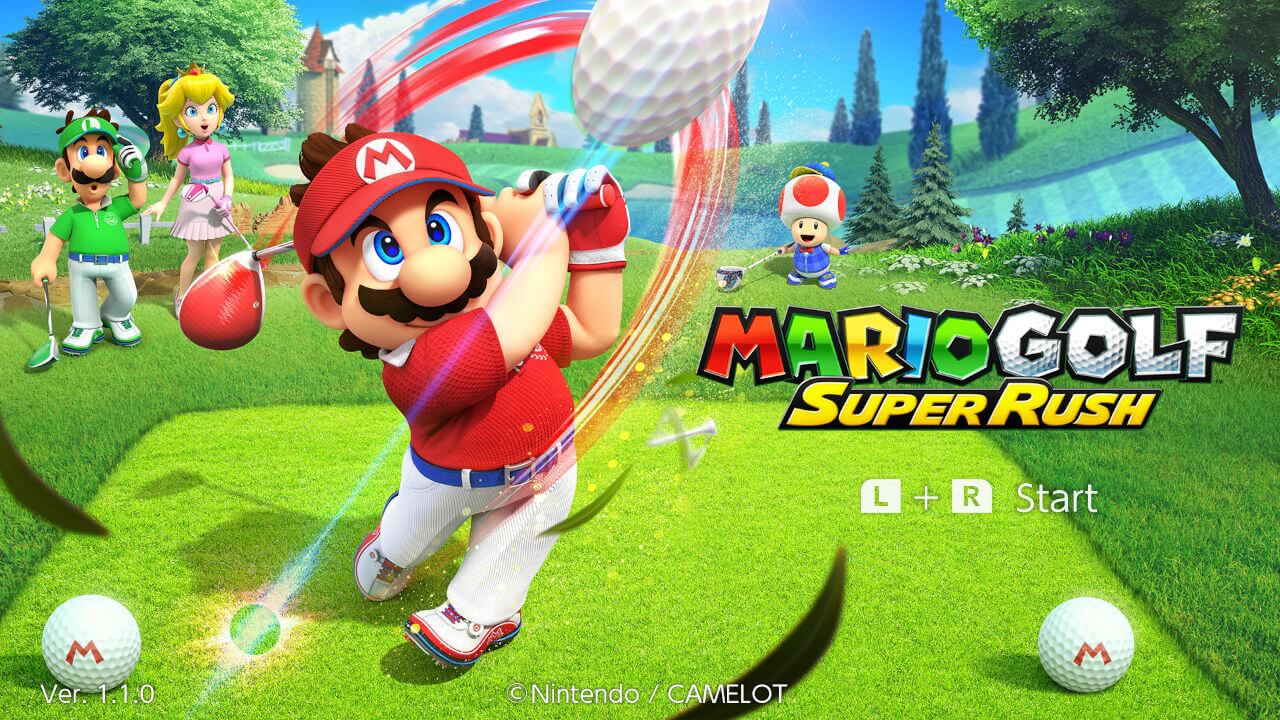 So let me start off with a potentially controversial take: Mario Golf: Super Rush best comparison is Mario Tennis Aces. 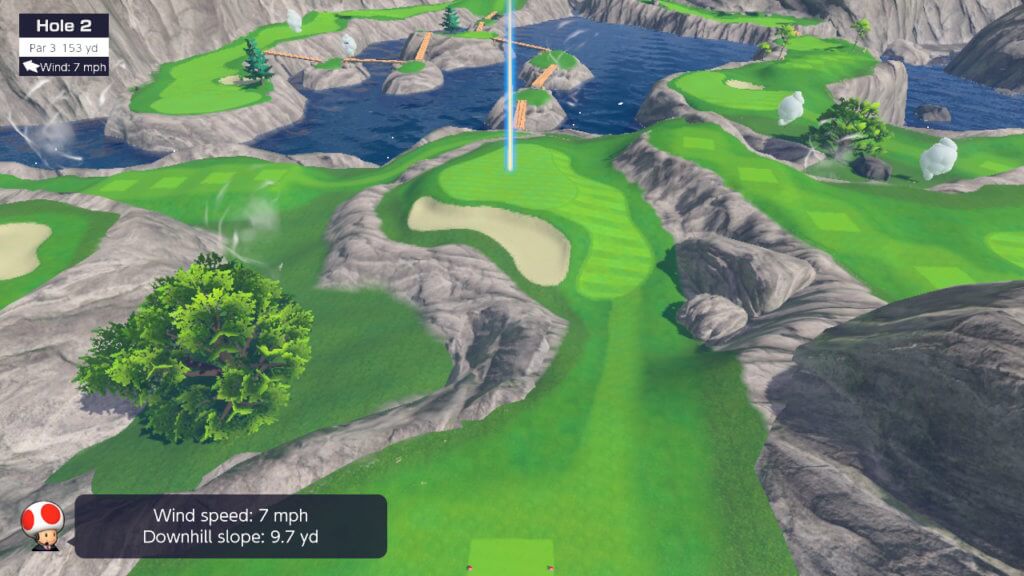 The game ties together realistic golf with Mario elements.

Both Super Rush and Aces deliver a fresh take on Mario sports titles, but retain a core focus on the gameplay of the sport itself. For Super Rush, the main mode of the game – golf – has been fine-tuned to almost perfection. The controls and mechanics are thoughtfully crafted to make golf appealing to newcomers but only able to be mastered by those who take the time to consider the deeper elements with wind direction and speed, slope, terrain, obstacles, and more.

Motion control play, too, was so much fun to play I actually preferred it to button-control. Personally, it felt reminiscent to the days of Wii Sports. Simply designed and well-implemented.

Both games also added single-player adventure modes. While slightly different in presentation, both were largely event-modes like, meaning the point was to play several unique challenges scattered throughout the world. These were nice variations on traditional gameplay – in the case of Super Rush, that may mean putting the ball as close to the hole as possible on different terrain or fighting boss enemies by striking them with golf balls. 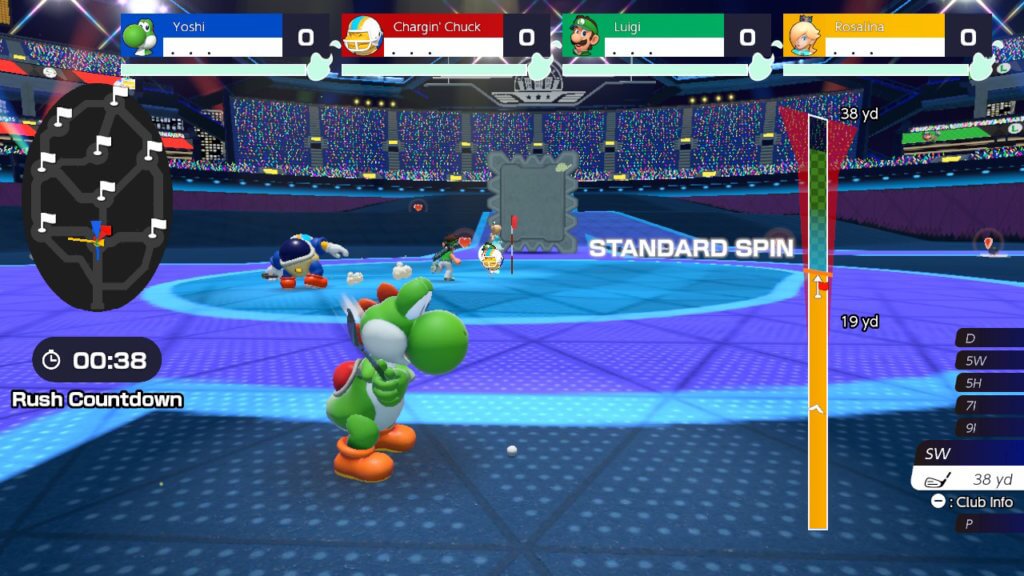 Battle Golf is supposed to be chaotic, but it ends up just being more golf.

Finally, both games offered some additional form of content. Aces had a tournament mode with online play while Super Rush had Speed Rush and Battle Golf. Speed Rush turned the slow-paced game of golf into a first-to-the-hole wins while Battle Golf used this same concept, but is played on a specific map with hazardous elements from the Mushroom Kingdom, like bob-ombs, thwomps, and more.

Yet – here’s where the comparison gets drawn out – the two games, in all their modes, fundamentally feel too real for a Mario game. That is, they seem to be sports games with Mario-themed coat of paint rather than a Mario game with sports elements. The distinction here is important.

Indeed, the best parts of the games are the sports themselves. What keeps players playing is in the gamification of the sport. Mario sports games have generally been unique and differentiated themselves specifically because of the charm and personality the series exudes.

Mario Golf: Super Rush, with all its merits, unfortunately does not do enough.

It gets the core gameplay of golfing down well. Like really well. But it tires out after a while. It lacks the charm, the zaniness, the over-the-top personality that some of the class Mario sports games had which kept players playing rather than looking to do something else (like actually going out and playing the sport in question).

Mario spin-offs, especially sports, have done better when they are more out-there design-wise. Look at Mario Kart. Or Super Mario Strikers. Each take the core gameplay (racing or soccer, respectively) and add so much personality and chaos that it can’t help but be exciting. In the latter example, playing soccer while weaving through both massive shells, banana peels, and the giant Bowser that appears on stage makes it all that more thrilling. And even in a calmer game, aggressive tackling, absolutely hyped up animations, and the atmosphere of a World Cup Finals keeps players energized and coming back for more. Some of this could even be found in characters, their interactions, and their animations, but Super Rush is noticeably bland in this department.

Speed Rush and Battle Golf are supposed to provide that chaos but fail because of largely limited significant deviations from the base gameplay. Outside RNG elements and an energy meter, these games fundamentally feel similar to the regular golf mode.

Perhaps golf is not the best game for those histrionics. It’s more slow-paced, methodical, and individual.

Yet, if there’s a company that could make it work, it feels like it would be Nintendo. 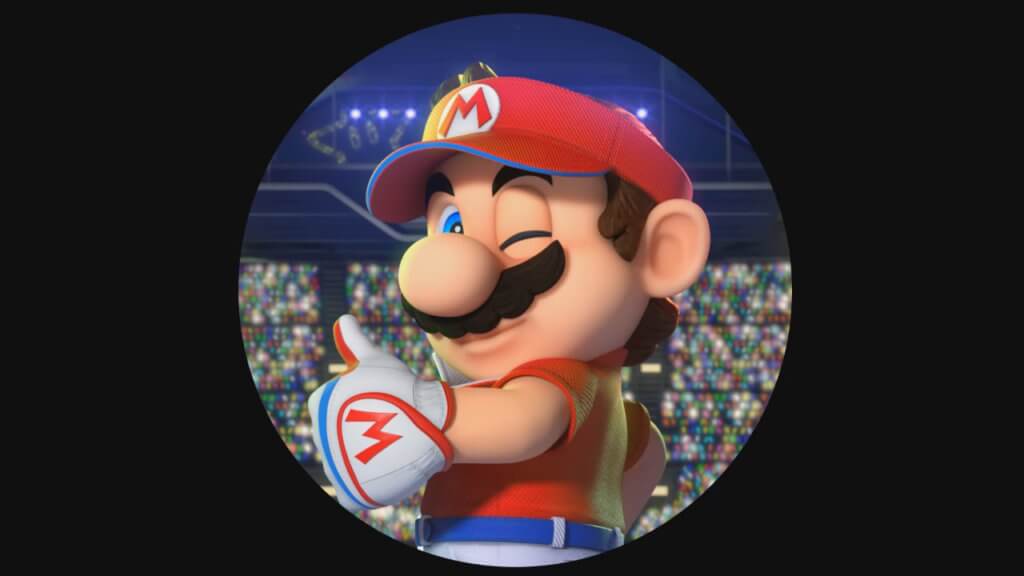 Look at all this personality! Where did it go Nintendo?

The comparison between Aces and Super Rush is apt because they both demonstrate a new design philosophy Nintendo seems to have, particularly with its Mario spin-off games. It’s a design decision to use the Mario franchise, yet not lean into the more wacky, creative, and zany elements of the series.

What gets remains, unfortunately, is bland and lackluster in comparison to what could be accomplished. It’s too real. Too golf. Not enough Mario.

Here’s to hope that DLC brings not only brings new characters and courses, but more personality and flair to boot.