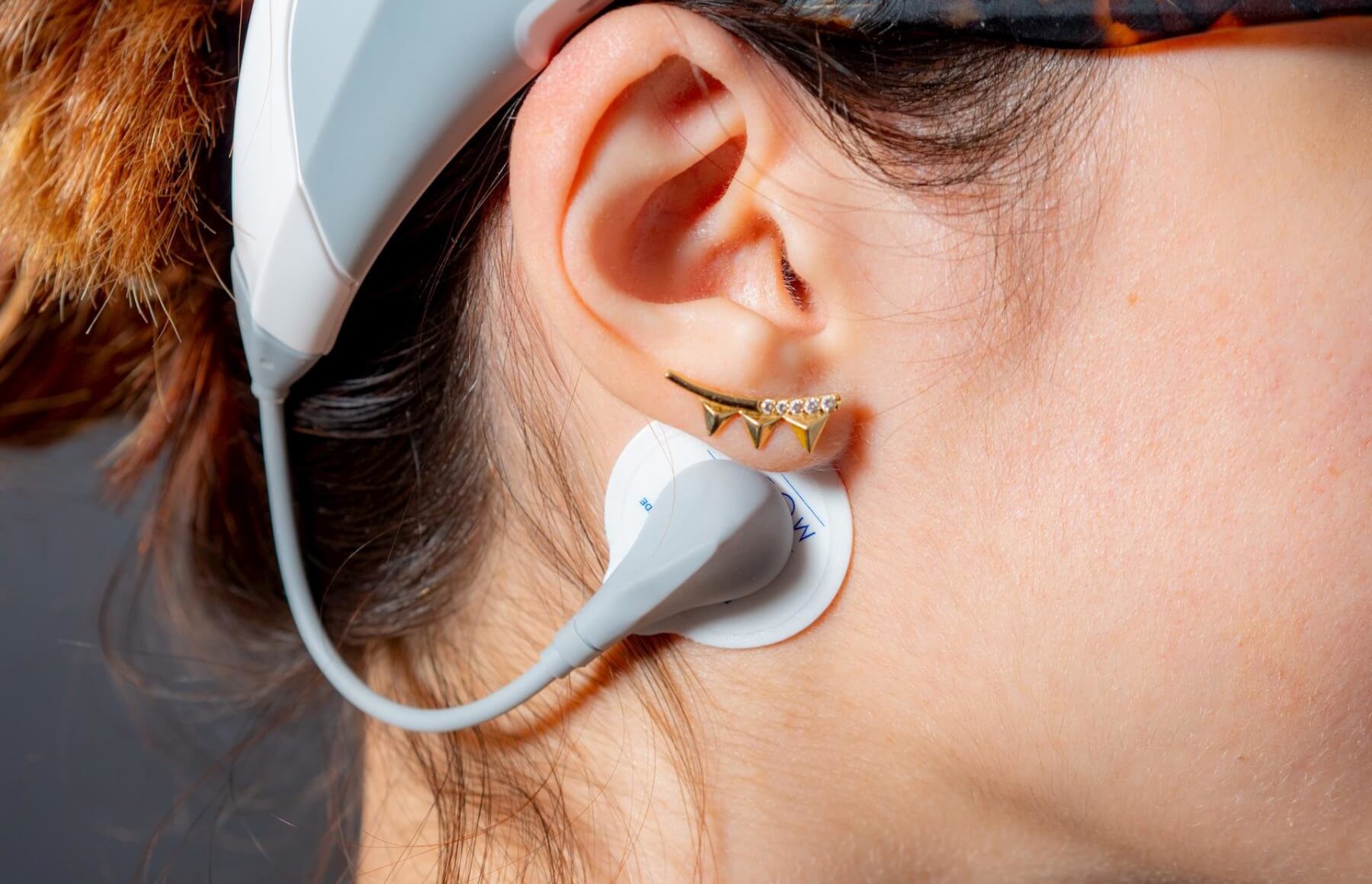 Getting out of your comfort zone is never easy and it doesn’t always pay off. But when it does… it’s pretty memorable. At least, it was in my case, when I finally got around to testing the Modius SLEEP headset.

First, a bit of context. Modius SLEEP is the latest product from Neurovalens, the company behind Modius SLIM. If you remember, Modius SLIM is the slimming headset that became a roaring success almost overnight so Neurovalens took those same principles and tweaked the recipe to create a similar gadget for people that have trouble with sleep.

I had the chance to test a prototype unit of it. That’s why it happens to look the same as the SLIP one, although there’s a big difference between the two: this one’s goal is to make you fall asleep faster, sleep better and wake up rested. The final product, however, will come in a navy shade and its form will follow even closer the shape of your head.

Why did I postpone testing it?

Zapping your brain to put you to sleep faster was an interesting idea so, at first, I couldn’t wait to test it. Only, after a couple of days had passed, the package remained unopened. I eventually realized that the idea of attaching electrodes, willingly, to my skin was actually terrifying! I was reluctant to do it at all, especially since my sweet *ahem* co-workers were joking around, telling me I’d wake up the next day doing God knows what, probably squawking like a chicken.

Obviously that didn’t happen (…as far as I know.)

Postponing the review didn’t last long. Not with the holiday season coming up and CES approaching. My work schedule was getting hectic, while my folks were asking about Christmas plans and my shopping list was steadily growing.

So I tore the package open to find not only the device, but its accessories, too. I was sent Modius SLEEP with a couple of bags of electrode pads, charging cable, cleansing wipes and instructions.

The device itself came in a black case and was pretty lightweight. Besides its cabled handles, it has a spot for USB charging and a power button on the right side. But before I’d switch it on, I had to download the companion Modius app.

After signing up, I added some personal info about me, like age, gender, height and weight. Then, I watched a step-by-step tutorial on how to use the headset, starting with… cleansing.

What do I mean? Well, to make sure the electrode pads attach securely, you have to clean the area behind your ears and brush any stray hairs aside.

Arranging the headset is extremely easy. It didn’t slip as I had feared and it didn’t weigh more than a pair of headphones. In a short time, I barely felt it anymore. So I attached the electrodes like in the tutorial and cringed at the thought of removing them afterward (it’s not painless, fyi.)

After pressing and holding the power button for 4 seconds, I heard a long sound and watched as the headset connected to the Bluetooth on my phone and paired. This process was almost instantaneous and went off without a hitch.

How does wearing it feel?

Then, came the hard part – letting those electrical pulses into the vestibular nerve so that they could reach the hypothalamus and influence my sleep patterns. I didn’t know what to expect but the slight tingling, pinching sensation took me by surprise and made this feel so much more real.

Thankfully, the app mentions feeling these sensations so I knew the Sleep headset was doing its job. To tune it correctly, I was asked to increase the power level of the device from the app until I could feel a “gentle rocking sensation”.

Honestly, I didn’t feel any difference between level 1 and 3 and I was trying hard not to let my own eagerness influence the result. Finally, at level 4, I started feeling as if my head was swaying from side to side. I wasn’t dizzy per se; I felt like a baby, rocked to sleep, believe it or not.

That feeling continued steadily for the next 30 minutes, the recommended amount of time to wear the device before going to bed. Towards the end, my eyes fell shut and I was lulled into going to sleep.

The next morning, I checked the app and it had kept track of the time I had worn the device.

What were the immediate effects?

For the next two weeks, I tried using the device every single night. The first thing I noticed – sleep did come faster. My body felt relaxed and heavy in a way, almost begging me to close my eyes and fall asleep.

My anxiety was still there, in the sense that I was still keenly aware of the work waiting for me but I was no longer waking up several times during the night, restless and overthinking everything.

Just as I was seeing results, we had to leave for CES and I left Modius SLEEP at home (afraid I’d oversleep this time!)

However, I started using it again as we returned from the States when the jet lag turned into falling asleep at 3 am and waking up four hours later. Or as I started again to wake up two or three times per night, usually plagued by bad dreams.

Is Modius SLEEP worth your money?

Turns out, Modius SLEEP works great when you’re jet-lagged too! In a week and a half, I was falling asleep at normal hours and stayed that way for at least 7 hours straight. I’m now writing this after a full night’s sleep, wide awake and refreshed instead of groggy and caffeinated.

Modius SLEEP worked when I was too stressed out to sleep and in a different time zone. One thing to note: I did try to go directly to sleep after using it, bypassing Instagram, drinking coffee, reading on my Kindle and other similar activities.

It’s also worth noting I do not suffer from chronic insomnia so I can’t really say how well this product works for someone with more serious sleep issues. But if you’re going through a rough patch, you’re in a constant state of anxiety, and can’t or don’t want to have to use pills or herbal remedies to fall asleep, this gadget will do the trick.

At the moment, Modius SLEEP is selling on Indiegogo for $399, with units being shipped in May. Let me know if you have any questions regarding the product in the comment section below!