New Gundam Kit From Bandai Will Help You Learn Robotics

Bandai’s Mobile Suit Gundam is, arguably, one of the most well-known franchises out there and their robots are a thing of the far, far future. If you ever dreamed about learning how to build one, Bandai is now giving you the chance to.

The Zeonic Technics Robotics and Programming Kit aims to teach both kids and adults about robotics as they are building them. Available for this kit are the MS-06V Zaku Tank Canon and MS-O6 Zaku II suits.

Model making will be mixed in with actually making the electronics themselves and the fans will be able to work on basic programming in order to complete the miniature Gundam suits.

The kit was designed by Bandai brand BN・Bot, who believes that building Gundam-inspired projects will inspire interest in STEM fields. They worked in collaboration with a number of Japanese companies that specialize in robotics, curricula and teaching materials. 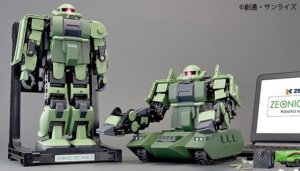 BN・Bot is no stranger to AI either – their first project was a communication robot called Guncierge Haro, who originally debuted as a character in the Gundam series in 1979. It is able to recognize people’s voices and analyze conversation for meaning and intentions. The robot can search a database in order to deliver the best responses and can interact and talk to people about topics that relate to Gundam.

The robot proved to be so popular after its unveiling during the “Ceatec Japan” that took place in 2017 that the first wave of pre-orders had to be cut off merely a month after release, with a second order period set to open soon.

Keeping in tune with Guncierge Haro, Bandai has displayed the Zeonic Technics Robotics and Programming Kit during the “Creatic Japan”, which took place this month.

Hopefully we will get to see some videos of the finished kits on the internet soon enough – the child in us is quite curious.