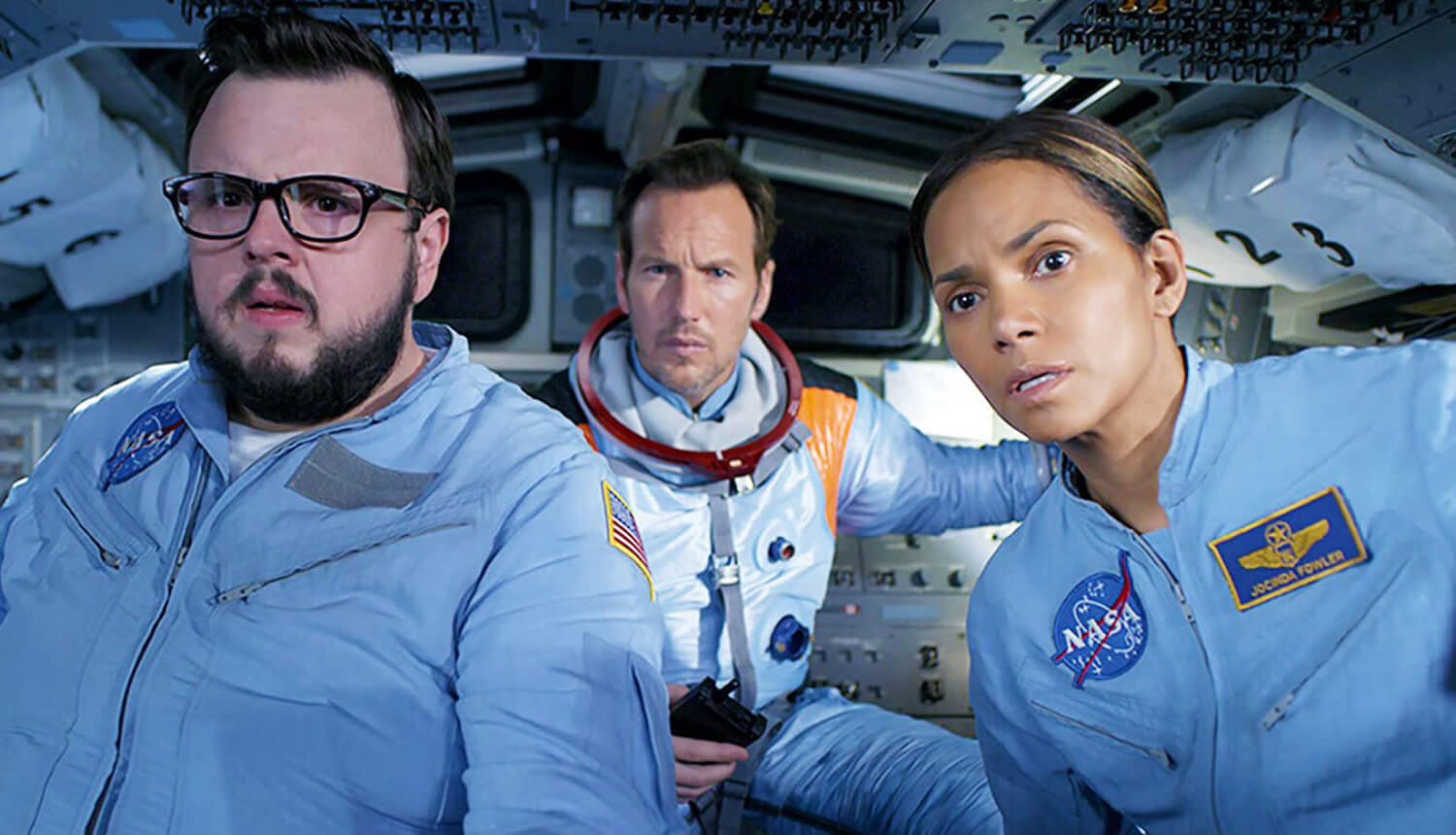 Is it good? Is Moonfall, the latest big budget disaster movie from the dude who made Independence Day and The Day After Tomorrow, actually a good movie?

Mega spoiler alert: yes, I think this is a perfectly fun disaster movie, no matter what the critics say. Here’s my review!

This is a movie where the bad guys in the military are trying to nuke the moon, nevermind the fallout that would come down on Earth and the good guys…well, they’re trying to EMP the moon.

Either way, the moon is getting a serious beatdown in this movie…even though it’s revealed that this celestial body is actually our friend, and not just for romantic candlelit dinners!

So, right from the start, the formula of Moonfall feels oddly familiar. It’s like someone threw in all previous disaster movies in a spreadsheet, figured out how many secondary characters and dramas to add, how many Hollywood A-listers are needed to carry the plot…then put in the big disaster.

Somehow, this gives me hope that I could make a disaster movie of my own and it would rock. I just have to go through my Tivo Stream 4K, pick out the best movies – which is easy, since this baby gets stuff to watch from all the streaming apps, then I dunno, I could slide in the DMs of some Hollywood peeps to offer them this amazing opportunity. I’m thinking Tom Holland, cause you can’t have a movie without him nowadays…and maybe Zendaya, for guaranteed box office success.

But anyway, while I workshop what kinda disaster should Tom and Zendaya be hit with, let’s see what Moonfall has to offer.

You have Halle Berry as Jo Fowler, an Astronaut and future head of NASA. You have Patrick Wilson as Brian, a former astronaut who falls from grace when, during a routine mission in space, he’s attacked by a weird black cloud and loses a member of his team.

The catch? Halle Berry’s Jo was also on that mission with him but she was rendered unconscious, so she has no idea what actually went down. NASA does know, though, and doesn’t want anyone to find out that astronauts are getting attacked in space.

Desperate to cover up the incident, NASA starts a series of trials and a media smear campaign against him so, by the time the movie properly kicks off, he’s just barely managing to make rent and works as a tour guide for kids visiting the museum.

You know who knows everything though?

KC Houseman, a British conspiracy theorist who’s working as a janitor in NASA just to get the insider scoop at what’s happening at the agency.

Surprisingly, John Bradley of Game of Thrones fame is the heart and soul of this movie. His character is supposed to be a 1 for 1 for Randy Quaid in Independence Day but really, who can hold a candle to Randy?

Still, John Bradley turns in a pretty cute performance in Moonfall – he’s basically Samwell Tarly stuffed in a way too small NASA suit and thrown to the moon to save the planet.

And back to that insane plot, because Moonfall really really nukes the fridge here.

So, the trailers promised that the Moon is going to fall on the Earth and basically destroy life as we know it. The movie, in its 2 hours runtime, has to do something more on the disaster front…cuz it can’t just be as straightforward as that.

So, the movie has KC Houseman as a tinfoil wearer who claims the moon is basically hollow. He says it’s an artificial megastructure built by aliens millions of years ago, powered by a white dwarf star and, wouldn’t you know it… that’s exactly what the moon is.

And no, the moon doesn’t just one day decide to get closer to Earth to end all life. Instead, it’s attacked by a swarm of AI controlled nanobots, whose whole purpose is to kill anything, any object, any ship that has electronics and biological life inside.

You see, the actual aliens who built the moon were human. They were our precursors millions of years ago, living in perfect harmony on a distant planet. Unfortunately for them, the AI that they built to control everything on their planet turns against them. Before that AI wipes them out, they manage to build the Moon as a terraforming ship. They send it across the galaxy, the Moon ends up in our solar system and starts building earth as we know it, seeding it with human DNA.

Fast forward some more million years, humans doing their thing yada yada, and bam – a swarm of those killer nanobots finds the Moon and gets back to the business of wiping out biological life.

The easiest way to do it? Well, crash the Moon into earth, killing 2 birds with one stone.

I’m telling you, this movie has it all. I thought the prospect of the moon falling out of the sky was absurd but Roland Emmerich decided to take it one step further. Why not have killer AI too? Why not have precursors like in Halo and Prometheus?

Basically, anything to justify that 2 hour run-time.

And I’ll be honest. It really did work for like an hour and a half.

If you suspend your disbelief or just put your brain on total pause, Moonfall will make you laugh a lot. This is the perfect B movie trying to look like a AAA one and every ingredient is so mindbogglingly stupid…the whole somehow becomes brilliant..

As one dude on Reddit put it, Moonfall makes Geostorm look like Interstellar…and you gotta admit, that’s something.

Halle Berry acts like she belongs in a daytime soap opera.

John Bradley does his best but unfortunately the filmmakers put him there just to make fun of his weight in various scenes. When they’re not focusing on making fun of how he looks, the filmmakers have him wax poetic about SpaceX and Elon Musk. Seriously, he has multiple lines in which he says he loves Elon and asks what would Elon do in that situation.

Then, you have Michael Pena, a super fun actor. He’s cast as the new husband of Patrick Wilson’s ex and he has two jobs here: first, he has to be a Lexus dealer, because this whole movie is a Lexus ad, and theen…he has to be a stepfather. And if you know your disaster movies, then you know that there’s nothing Roland Emmerich loves more than killing the stepfather.

After doing mostly nothing but repping Lexus and acting like a good dad trying to save everyone, Michael Pena gets killed in the stupidest way possible. Seriously. His daughter runs out of oxygen like 30 meters away from safety, so he gives her his tank. What does she do? Just like Rose on that plank at the end of the Titanic, homegirl doesn’t share. She just takes the oxygen tank and leaves Michael Pena to suffocate. Once she reaches safety, someone does go back to find Michael Pena…but they get distracted by the Moon falling to Earth, so they forget all about him…so he dies. Really, you can’t make this up.

Between this scene and a car chase that’s set up to show how the newest Lexus has a sports mode, I was laughing so hard it was almost impossible to follow the plot.

I  did catch a Kaspersky product placement which made me crack up again, cause apparently NASA uses the Kaspersky antivirus…even though that piece of software was banned in the US government out of fear of Putin spying on everyone…

And an Omega product placement, because Patrick Wilson needs a countdown timer to know exactly when he should blow up the alien in the moon…because if he doesn’t blow up that alien the army will try to blow it up.

Aand, I noticed how, outside of the 3 main characters, everyone seems to be impersonating a potato.

The astronaut’s son who’s a rebel and got arrested for racing cars? Potato.

Seriously, a potato has more acting range than this dude, which is hilarious considering he has the best lines since Shakespeare.

You see, he’s the general in charge of nuking the moon. He’s acting all gruff potato, holding the keys to the nukes, getting ready to deploy and all that. Theeen, at the very end of the movie, just as he’s about to twist that key and blow everything to smithereens, the potato gets mushy.

He yells, and I shit you not: I can’t do it. My ex wife is up there in the moon and she never let me down so far!

So yeah. While the military base is getting pummeled by moon rocks and everyone is about to die, the potato man says his ex wife will save the world, so just sit tight and get squashed by moon rocks. It’s fine, she’s Halle Berry. It’s particularly stupid because, like 5 minutes earlier, he didn’t even know his ex wife was up in the moon.

Anyway, I apologize. The potato comparison is totally unfair because potatoes are really useful actually. You can boil them, mash them, stick them in a stew, you know…

And this guy isn’t.

Still though, it’s stupid stuff like this, it’s Elon Musk references and antivirus software commercial that make Moonfall such a masterpiece.

This is a movie so implausible, so stupid, so rushed, it somehow works. It would have worked even better at like an hour and a half instead of two, but the ending was so brain-meltingly-stupid, you just had to be there to see it…and I wouldn’t change a thing. I could have spent that time sitting home with my Tivo, I could have went to see the new Jackass…but that movie is basically Citizen Kane compared to Moonfall… and who wants that?

Are you telling me Moonfall isn’t a good movie?

Were you not entertained??!