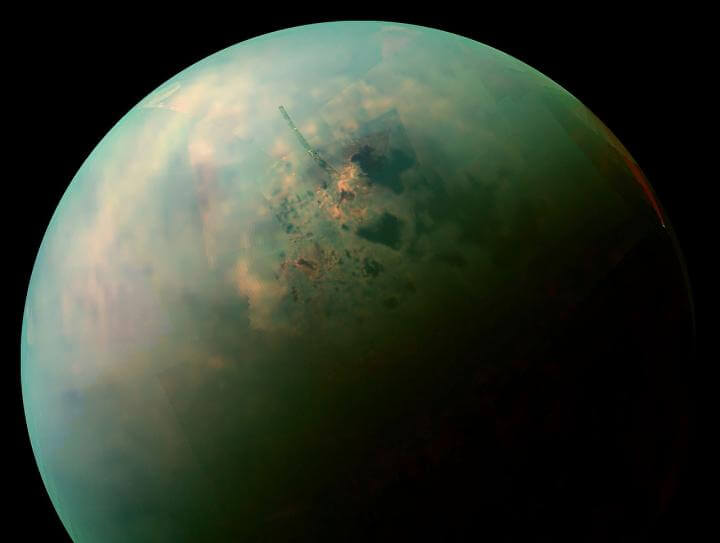 If you’ve ever read any pulp science fiction from back in the golden days of the genre, the title of this article might have struck a chord of nostalgia. Because indeed, the theory does bring to mind sci-fi stories written in more innocent times.

However it is known that Titan, the most famous of Saturn’s moons, is one of the places in our Solar System we expect to find life extra-terrestrial life on, mostly because of the abundant, hydrocarbon lakes that can found near the polar regions.

These lakes are unlike the lakes on our planet though: they’re made out of ethane and methane who only exist as liquids because of Titan’s temperature of roughly around -297 degrees Fahrenheit (182.8 degrees Celsius).

These lakes are surrounded by something scientists have called “bathtub rings” – dark smears left behind by water that has evaporated. These rings have started to spread across the surface of Titan and, after long debates, the scientists might just have an idea what they are: probably crystals.

A team of researchers from NASA’s Jet Propulsion Laboratory decided to make an experiment of their own in order to either debunk or prove the theory and built a cryostat (a chamber that keeps things cold) specifically designed for this purpose and chilled it to Titan-like temperatures, filling it with methane, ethane and other molecules containing carbon.

When these bathtub ring formations happen on Earth, they are the result of solids leaving a liquid as it evaporates. In the experiment chamber the first solids that dropped out of the liquid were benzyne crystals. This molecule can be found on Earth in gasoline and in the chamber the benzyne’s molecules formed crystals that enveloped the ethane molecules.

The way the molecules re-arranged themselves to envelop the ethane molecules called something called a co-crystal.

The crystals that included acetylence and butane were next: they followed a similar process and the resulting crystal is expected to be more commonly found on Titan due to the moon’s composition.

The experiment does not necessarily mean that these crystals do form on Titan but that there is a chance they might.

“We don’t know yet if we have these bathtub rings [on Titan],” Morgan cable, researcher at the Jet Propulsion Laboratory said in a statement. “It’s hard to see through Titan’s hazy atmosphere.”

To either confirm or deny their experiments, the scientists will have to wait until a spacecraft will be able to visit Titan’s shores.

Until then, Morgan Cable will be presenting the research at the 2019 Astrobiology Science Conference.