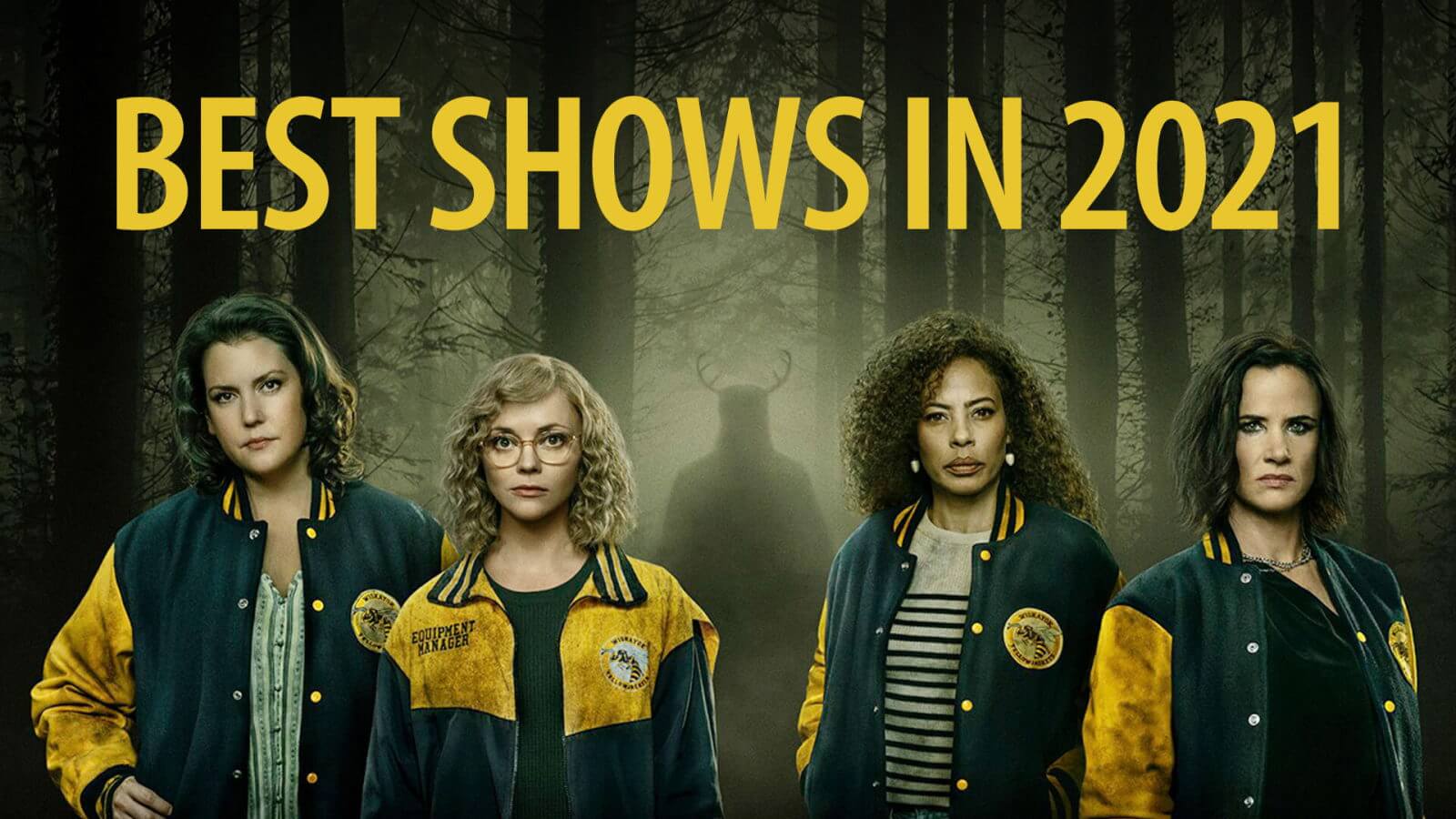 If you’re wondering what to stream next, start here.

We went through my TiVo Stream 4K and handpicked the best TV shows of 2021, from all streaming apps and TV networks.

From unexpected hits like an animation based on a video game to quiet dramas, this was a pretty good year for entertainment. If you’re wondering what to stream next, start here.

Hit play and don’t forget to like and subscribe (if you didn’t already) because your support is incredibly important to us!

Hello hello, it’s the season to be jolly!…Hmm…or is it? No matter how you choose to celebrate this year or skip the stuff entirely, I’ll bet you’ll be spending a lot of time watching TV. That’s why I went through my TiVo Stream 4K and handpicked the best TV series of 2021, from all streaming apps and TV networks.

From unexpected hits like an animation based on a video game to quiet dramas, despite everything this was a pretty good year for entertainment!

Let’s start off with the undeniable winner in the top 2021 series: Squid Game.

This Korean drama pitting the unfortunate against each other to entertain the rich and hopefully make some money broke all records.

From the very beginning, it’s impossible to look away from this eye-candy. Not only is Squid Game an irresistible proposition – what would people do to each other to get a huge amount of money? – but it also looks fresh as hell. With colorful sets designed to look like children’s playgrounds, Squid Game is the perfect example of why we love K-Dramas – they look like nothing you find in Hollywood!

Then, we have Hellbound. Fresh off the heels of Squid Game’s success, Netflix doubled down with yet another irresistible idea.

\What would happen if some people were visited by supernatural creatures who predicted their deaths?

You’d get maybe another week, or maybe 10 years of life but, because you’re a sinner, at a certain moment those creatures would appear to drag you to hell. Hellbound examines a religious movement that starts around those creatures and how society changes to accomodate the supernatural, which is a very interesting lens to look through.

With just 6 episodes, this is a series you’ll blow through in a single day and then text everyone to talk about it.

But by far the biggest TV surprise of 2021 is Arcane, an animation series based on the popular League of Legends games. Who would have thought that a show based on a Dota-type of game would be number 1 in most Netflix countries, even watched by people who never played a video game in their life.

I didn’t but let me tell you – this is the best animation I’ve seen since Love Death and Robots. It’s dark, super morally ambiguous, has a world unlike any fantasy stuff I’ve seen before and the animations – oh boy, I don’t think I’ve ever seen such realistic stuff, with every flicker of emotion drawn on the characters’ faces.

Trust me, leave all preconceptions behind and give it a shot.

That’s exactly what I had to do when watching Yellowjackets. This series was recommended to me by my TiVo, who knows me better than I do – and knows I tend to skip traditional TV stuff in favor of streaming apps.

Yellowjackets is probably the best show to come out of Showtime, the old network, and every week I’m at the edge of my seat waiting for a new episode. That’s right – this is some old-school, wait a week for your next fix type of deal.

In short, it’s Lord of the Flies but with girls stranded in the woods instead of boys on an island. The show jumps from the past, when a plane carrying the Yellowjackets girl’s football team landed in the woods, stranding them for more than a year, to the present day, where you have a few survivors.

While the present day does spoil who lived and who died, the show has plenty of mysteries and even a strong supernatural element.

But if you want all-in supernatural, head on to Amazon Prime for the best fantasy TV show of 2021.

Surprise, surprise, it’s Wheel of Time. This series is based on about 14 classic high fantasy books and it’s basically both a Lord of The Rings love letter and a critique.

If you like the Lord of the Rings series but always hoped for more diversity in characters, give Wheel of Time a chance.

The first episode is like a one for one for the first Lord of the Rings movie, so the producers do pay homage to the OG, but afterwards this show develops into a fantastic and unpredictable adventure. Bonus points for the fact that no one is dirty in this show and everything is colorful. This isn’t some grimy Game of Thrones medieval world where no one has any food or soap and I for one am glad for the variety!

Speaking of variety and colorful, this next show really took me by surprise…and had me sleeping with the lights on for the next week or so.

Chucky the 2021 TV series is everything a horror show should be. it has that element of nostalgia somewhat, cuz who wasn’t traumatized by that murderous doll? It has plenty of murder, because, once again, this is Chucky we’re talking about….but it also has lots of humor and incredibly well-developed characters for the franchise.

I didn’t think it was possible to take some cheesy 80s movie and turn it into a wild ride of a series but here we are!

Best Shows in 2021: The Sex Lives of College Girls

On the topic of wild rides, check out The Sex Lives of College Girls. Uhmm, yeah, that sounded weird..but it’s not my fault, that’s what the show is called!

I watched this show straight after Chucky and I was on the floor laughing from the very first episode – but that’s to be expected, since it’s made by Mindy Kalig.

With all the older people crying about And Just Like That, the horribly depressing Sex and the City sequel, I’d say skip that drama and try this comedy instead. It’s fun, it’s light, and each character has a relatable storyline.

But for a mix of drama and comedy, try It’s A Sin. This British series is probably the most charming show I ever saw, with characters so lovable, you’ll be a mess by the end.

It’s A Sin is a mini-series with just 5 episodes, so you’ll get through it in a few hours, but the story will stick with you for a long time. This show follows a group of friends growing up and finding their way in London, just as the HIV / AIDS crisis gets started.

Despite the looming threat, the fear and confusion, the characters live life to the fullest and they’re so lovable, you wish you could teleport in their living room. Most people tend to avoid shows like this because they find them either too depressing or too preachy but trust me, It’s A Sin has an atmosphere that’s just incredible and uplifting.

I picked this next show based on atmosphere and sound too.

The White Lotus is probably one of the best comedies to ever hit HBO and that’s saying a lot, considering they also have Catch 22 and other great stuff.

But White Lotus…this show is in a different league and will have you humming its soundtrack long after you watch it.

The premise is simple: rich people going away on holiday on one of those five star resorts where the staff bends over backwards to keep them happy. It’s nauseating, I know, but White Lotus does feature some fantastic characters that keep the drama going. Case in point: Jennifer Coolidge, aka Stifler’s mom, who makes you wanna hug her, kiss her and slap her all at once.

And it’s not just Jennifer Coolidge who spent 2021 proving she’s a world class actor in a performance no one expected.

Kate Winslet, forever known as Rose, the girl who wouldn’t let someone else share her raft to survive the Titanic Disaster, came back this year with the best crime series of all.

Mare of East Town was a phenomenon and I couldn’t not include it in my Best of 2021 roundup.

This is a miniseries that has all the realism and quirky characters of Fargo…but I’d say is even better.

Kate Winslet plays Mare, a grizzled detective in a small town whose life is not just bad but actively becoming shittier by the day. Nothing in her life goes well, she’s a depressive mess, and when a teenager turns out dead in her quiet town, nothing seems like it will be ok. But trust me, it will.

Thanks to Winslet’s performance and a cast full of quirky and lovable characters, Mare of Easttown avoids the grim, depressive atmosphere of most crime shows and becomes a super cozy winter watch.

What about you? What is the best series you watched in 2021 and which TV show surprised you the most?

Share your favorite in the comments and let’s see the good stuff this year brought. And, while you’re there, please don’t forget to like and subscribe – it really helps a lot to keep me going!

Thanks and catch you next week!