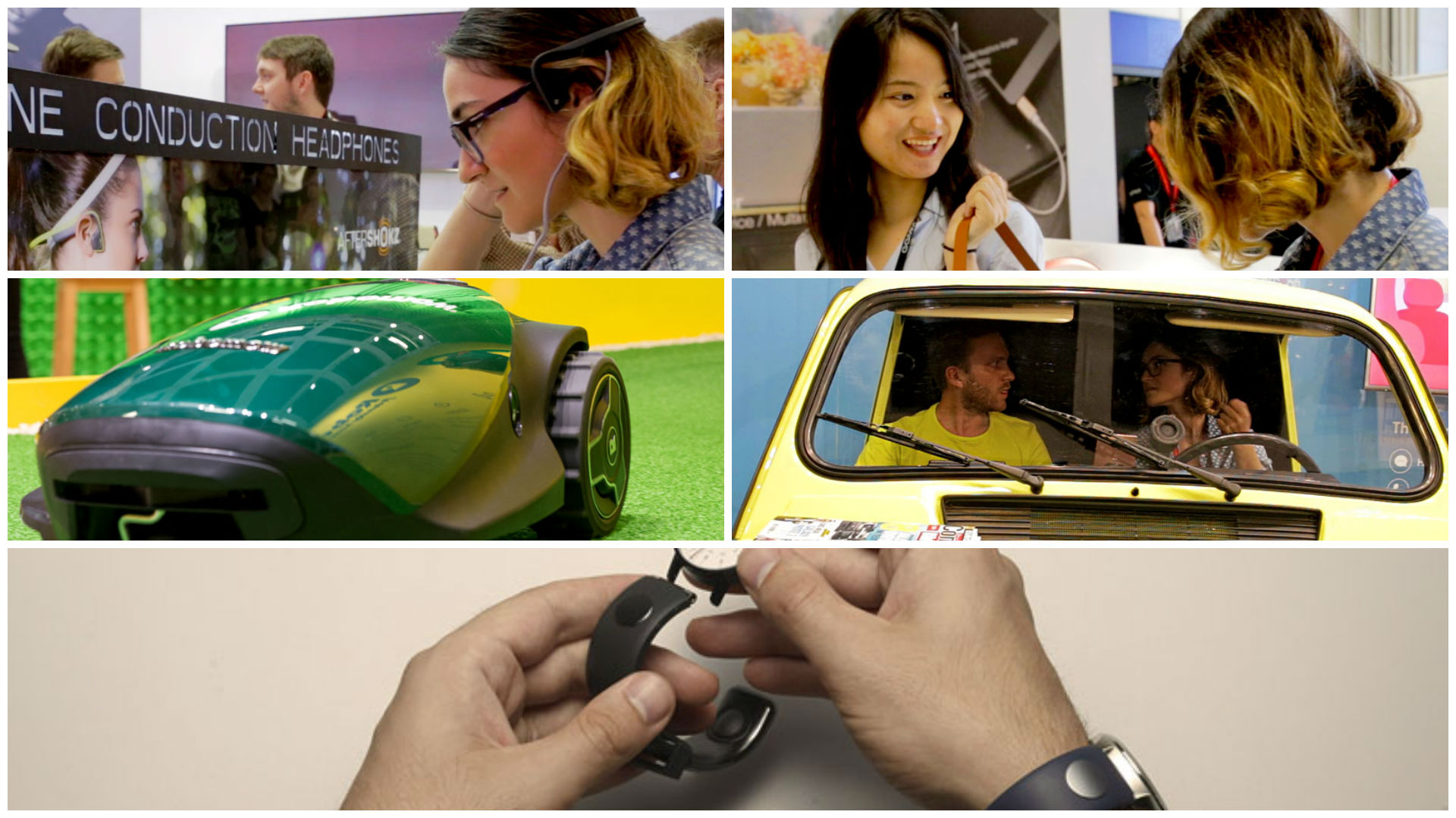 Top 5 Cool Gadgets That Will Stop You In Your Tracks

After testing, asking and debating the smart devices of the year – smartphones, drones, VR headsets, wearables -, we took a step back and looked after the cool, quirky gadgets we don’t need, but WANT. That’s how we stumbled upon an intelligent lawn mower for your folks, a speaker that resembles a bag for your girlfriend, a smart car mount so you don’t have to change your car and a couple more accessories for your multitasking friends #objectmagic

If you’re like us, never knowing what to give your folks for their birthdays or for Christmas, we have a cool, smart gift. Don’t worry, they’ll learn quickly how to use it. We found Robomow at IFA this year, roaming the green arena set for it, excited to show us what it can do. And boy, he’s not at all shabby! The lawn mower is not just powerful with 28cm/56cm steel blades but it’s almost completely autonomous. 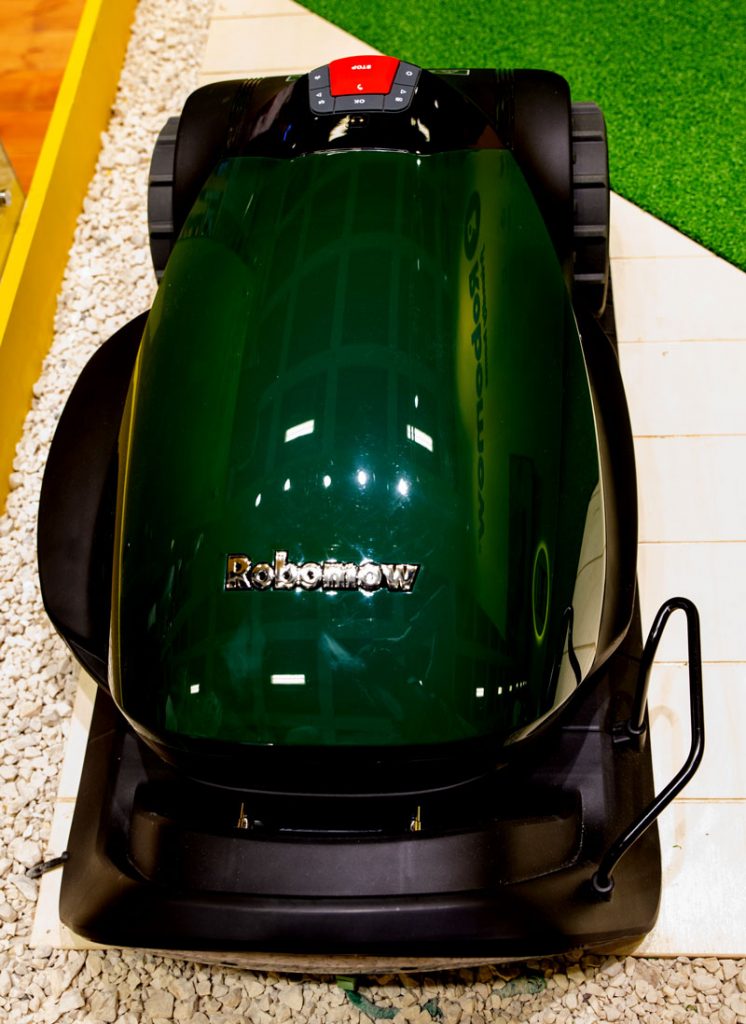 Instead of doing all the work in the garden, your dad can set this home robot to do the chore at an exact interval each day from a smartphone app. The guys at the stand told us it drives itself around the garden, cutting away the grass of all connected zones, either by grass or pathways, and returns to its base station, like a good boy. Isn’t that something?!

We liked that the robot is smart enough to know what could damage it. If it starts raining, sensors will alert it and push it towards its base home. “If you just leave it by itself on the garden, can’t someone steal it?”, I asked. The answer came quickly – you can put in a PIN code that renders it useless to sneaky neighbors or even naughty grandchildren.

Robomow developers had an answer to everything at IFA and it seemed like the robot could really handle itself. It didn’t waver before slopes of up to 36% elevation, they insisted. Of course, the final verdict depends on its performance in a real, big garden, especially since it doesn’t come cheap. The starting price is $999 for 11-inches mowing width. 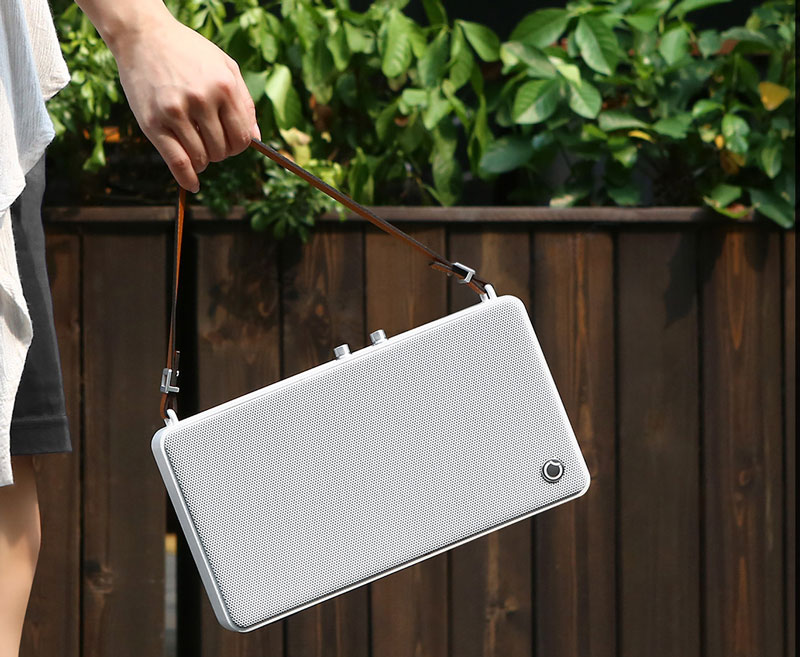 It was the end of the day and our team was in a hurry to get everything together and organized when we met Wendy. She stopped me in my tracks with a quirky portable speaker that I would have sworn to be a bag. The white version with leather handle was summer-appropriate and a chic picnic add impossible to ignore. While the design caught my attention, it was the specs that had me staying. 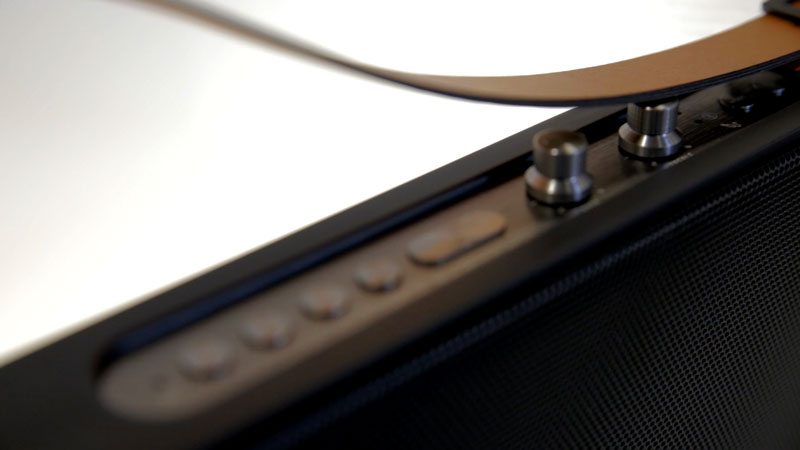 Called “E5”, GGMM’s portable speaker has 3 connections to play music – via Wi-Fi, Bluetooth or AUX in. The wireless speaker ha Alexa Voice Service function and if you’re indoors, can handle multiroom play and separate L/R channels. The full frequency speakers and two bass passive radiators should make up for a great music experience.

You can charge the E5 through USB. Keep in mind that the battery will provide up to 15 hours of continuous use.

Voice-command app for cars? Nothing revolutionary. One that connects to a phone holder, smartifying your car? Something new entirely. I’m talking about Logitech’s ZeroTouch system I had a chance to test in Berlin. After hopping in the yellow prop car, I simply snapped the phone in place thanks to magnets and waved like a Jedi in front of it (cool, right?). The ZeroTouch app activated and suddenly, I could do everything the latest car models brag about. 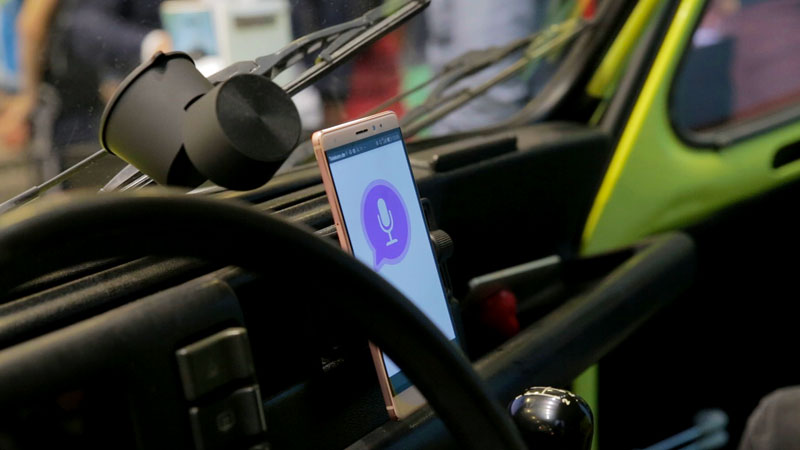 Voice control allowed me to check certain tunes on Spotify, Pandora, Google Play or SoundCloud, send messages without touching the display or call German folks I didn’t know (hey, their phone, their rules). I was told ZeroTouch can let dear ones know where you are through Glympse location service, in case of an emergency. Of course, voice control applies to Social Media apps, too, so you can reply fast in Facebook Messenger, Google Hangouts, and WhatsApp.

If you’re already driving when a dinner invitation pops up, you can easily navigate with voice-activated GPS and even check out the ratings on apps like Yelp. All in all, it seemed like a good idea for people who want to catch up with latest automotive trends but can’t invest in a new car model just yet. fact is, ZeroTouch is a bargain at $59.99. 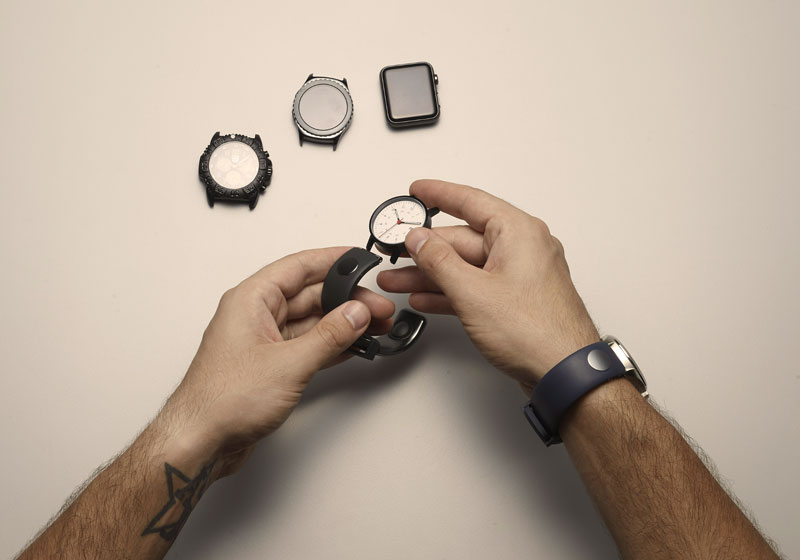 This strap was one of the most innovative gadgets we saw there. If you have a friend who has FOMO and needs to be connected one way or the other all day long, this could be a gift for him. The strap would allow him to take calls using just his fingers and keep the caller’s identity or words, private. Unlike a smartwatch, this smart strap transmits the signal through the body, to the ear, instead of coming out from a speaker.

We talked about it in detail here , deeming it one of the best wearables we’ve seen at the European fair this year. 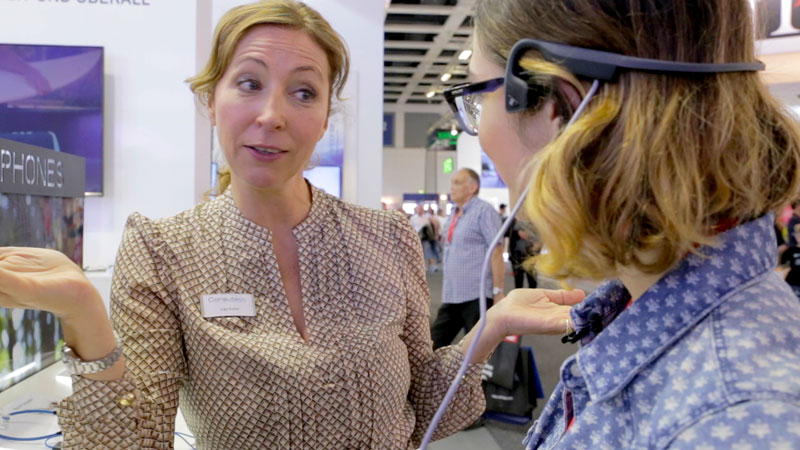 I know, I know, this sounds like the name of a rock band or energy drink. In fact, AfterShockz is a company that makes headphones with bone conduction technology. If you haven’t heard about it before, in essence this means that the headphones go near the ear, not over or in it, acting like ear drums. The sound travels through the bones, directly to the Cochlea. Vibrations go through the cheekbones in this case, reaching the inner ear. 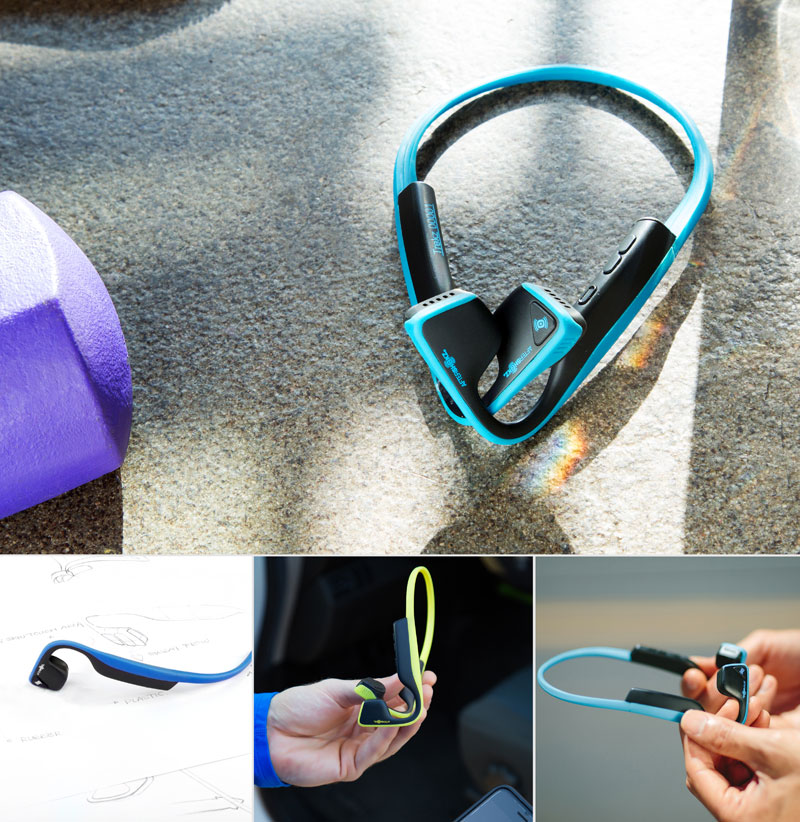 At the booth, I tried the Trekz Titanium, wireless, open ear sport headphones for people who run, hike or cycle a lot. My ears were free to listen to my colleagues and our host from the stand, while I was hearing music! AfterShockz tried to stop the natural sound leakage with LeakSlayer™ technology, a fancy name for their way of ensuring most of the music reaches your inner ear. I found the IP55 protection extremely fitted, especially if you run in summer or it starts raining.

The open ear headphones come with dual noise canceling microphones and guarantee 6 hours of music on a single charge.  The Trekz Titanium need 1.5 hours to fully charge, so make sure you’re all set before going for your early jog. 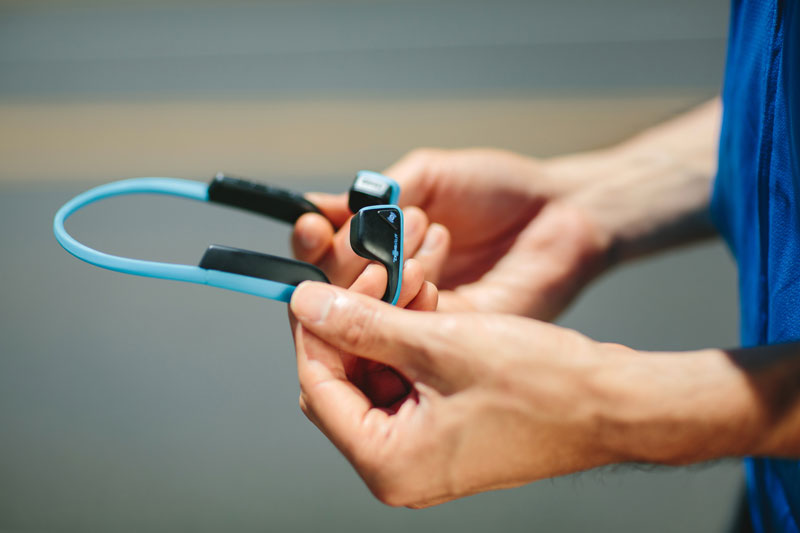 If that sounds cool enough for you, let me tell you the headphones are already available for purchase at $129.99.

Top 5 Cool Gadgets That Will Stop You In Your Tracks