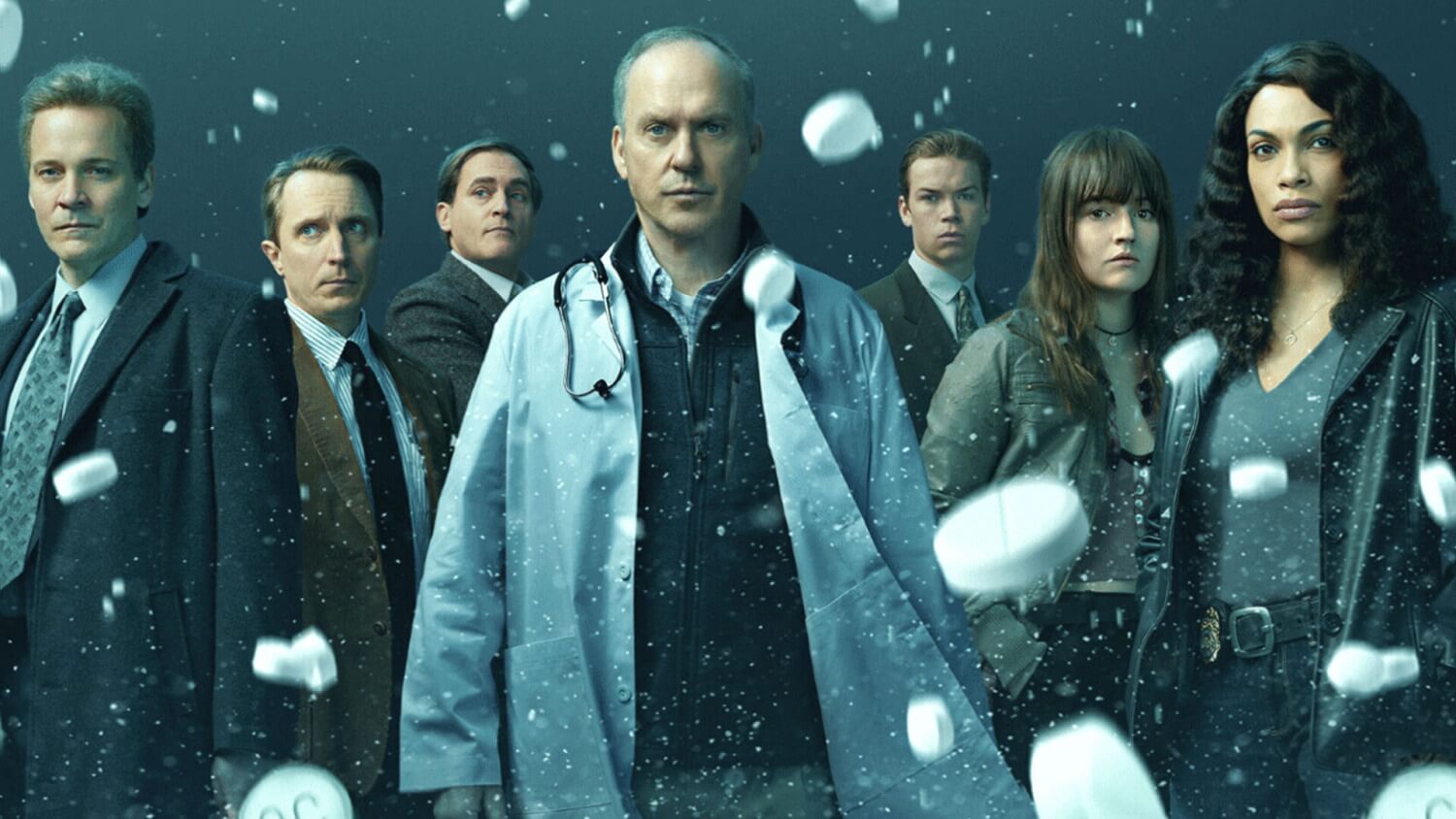 Did anyone else join Hulu just to watch the Handmaid’s Tale and kept waiting for more stuff to be added? Raise your hand if you were ever personally victimized by the lack of content on streaming apps!

My TiVo Stream 4K surfaced this show on Hulu and, without that recommendation, I don’t think I’d have opened the streaming app myself.

Let’s see what it’s all about. Please consider liking this video and subscribing to our channel if you didn’t already: your support helps us keep going!

In a nutshell, Dopesick depicts America’s opioid epidemic without pulling any punches.

The series goes hard after Purdue Pharma, the makers of Oxycontin, and examines how they managed to deceive both doctors and the public by claiming that this drug could make the entire world “pain free”.

It examines this crysis from all the angles, so you can see just how it ended up developing into an epidemic.

You have Michael Keaton playing a doctor who’s convinced by a medical rep to start his patients on Oxy.

You have the medical reps who push the drug to make money and, as time goes by, work overtime to ignore its disastrous effects.

Dopesick spends a lot of time showing how regular, decent people can get turned into addicts ready to burn all bridges, but it also dedicates plenty of screen time to the Sackler family. You know, the evil clan who manufactured and deceptively marketed Oxycontin as a “less-addictive opioid”.

As the name says, Dopesick is an unrelenting look into the lives of the regular people ravaged by the opioid crisis.

Kaitlyn Dever is spectacular in her role as Betsy, a young woman working in the mines with her father, who dreams she could live in a less conservative area in order to come out as gay and live life as she wants it. After a mining accident, she goes to her doctor, who has just received samples for a new, “less addictive drug” called Oxycontin.

That doctor is played by Michael Keaton and let me tell you, his performance is definitely one for the Emmys, if not Oscars.

Keaton plays a heartbreaking role here, starting as a kind-hearted physician who, despite his best intentions and caution, gets swept into the rising Oxy tide.

Rosario Dawson also does a wonderful performance as a DEA agent who spent half her career trying to bring the Sackler family to justice but lost everything in the process.

If I were to ding this series for anything, it would be on two points.

First, the story isn’t told chronologically, instead jumping through three or four different timelines. It can get confusing and frustrating, especially when it comes to the present day and the plot resolution.

And the second ding, and no one should think I’m defending the Sacklers here..but…well, I do have to say they’re horribly portrayed.

Obviously this family has a lot of blood on their hands and their unrelenting chase of profits lead to one of the worst crises the world has ever seen. Still, they are only just human, and humans tend to be…you know, multifaceted.

Instead, in the Dopesick series, each and every Sackler family member is portrayed as a mustache-twirling villain, with Richard Sackler ending up almost a cartoon character.

Don’t get me wrong, Michael Stuhlberg as Richard Sackler turned in an awesome, skin crawling performance…but his character was incredibly one-note.

I haven’t seen a villain this black and white in ages.

You see, the problem is that there are very few details about this guy.

While Dopesick is the true story of the opioid crisis…or as true as it can be, all the characters are fictionalized, and then you have the problem that the Sacklers are a mysterious bunch.

With little being known about these secretive billionaires, the writers took some creative liberties with their characters – and landed at “totally evil” as a personality.

Anyway, overall, Dopesick is the best new series you should watch right now. And if you did and are looking for like a palate cleanser, so you get out of that funky mood, I have a few ideas on what you should watch next.

I looked through everything Hulu has to offer and these are the best shows you should add to your queue.

The best shows on Hulu: Catch-22

The first is Catch 22, probably one of the most underrated comedies of all time.

This George Clooney series is based on the famous novel and takes dark comedy to a whole new level even Fargo couldn’t reach.

You follow around John Yossarian, played by Christopher Abbot, a bombardier in World War 2. He totally hates his job but ey, it’s the war, so he has to fly a number of missions until he can be discharged. Unfortunately for him, his superiors, played by George Clooney and Hugh Laurie, have a war to fight…so every time Yossarian gets close to finishing his missions, they just increase the number of them.

Catch 22 is sort of a modern MASH and will have you laughing and crying indiscriminately.

Then, you have Difficult People. This is another fantastic Hulu show I only discovered thanks to my TiVo, since this is the only thing I use to watch stuff online.

Just like Catch 22, this is also a dark comedy but the setting is modern, so a lot more relatable.

It’s about two comedians who struggle to live in New York. I can’t say “live and thrive” because the grind has really made them some difficult people, as the name says.

They hate everything and everyone and they’re kinda like Seinfeld characters but taken up to 11.

Julie Klausner and Billy Eichner are playing those two comedians but the show’s three seasons has a revolving door of awesome talent, from Lucy Liu to Gabourey Sidibe and Julianne Moore, plus established comedians like Amy Poehler, Tina Fey and Patton Oswalt.

And for my last recommendation…check out Future Man.

This is another three season series that unfortunately but predictably ended last year. I don’t know why no one watched it, because it has all the ingredients to be a huge hit.

It’s a scifi comedy series written by the creator of Misfits, another great show, alongside Seth Rogen and Evan Goldberg, so you know you’ll be on the floor laughing.

Future Man follows a time traveling janitor who loves video games. One day, when he finishes his favorite game, the characters come to life and ask him to save the world – and there, the chaos starts.

This series is like Ready Player One if Ready Player One wasn’t just a cringefest with a thin coat on nostalgia on it. It’s for geeks and gamers and people who grew up shooting aliens on a small screen.

Plus, it gives Josh Hutcherson a chance to show off his range…since he got famous on The Hunger Games as a sad potato.

Trust me, if you watched Dopesick and want a good series that’s totally different and totally upbeat, stream Future Man this weekend.

Orrr…if you have another suggestion, I’d love to hear it.

What do you think are the best shows on Hulu right now?

Let’s talk in the comments and don’t forget to like and subscribe if you didn’t already! Your support is what keeps the lights on around here!