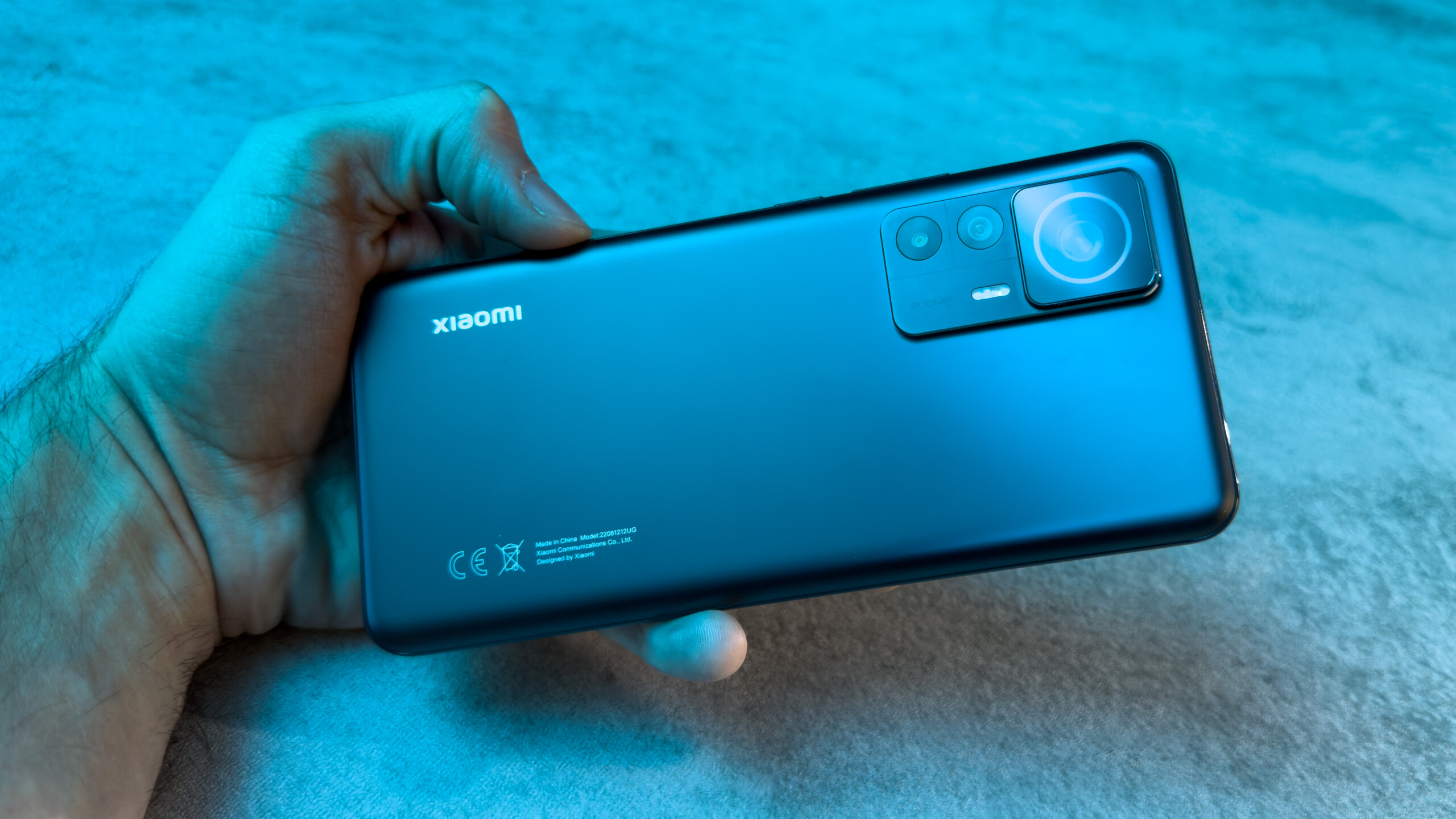 If you’re on the market for an Android flagship in 2022, Xiaomi’s Mi 12T Pro, launched in October, comes pretty close considering its price tag.

While December saw the launch of the postponed Xiaomi 13 flagship, the Mi 12T remains a very strong choice if you’re looking for one of the best Android phones at a lower price tag.

Let’s see what Xiaomi has to offer with the Mi 12TR, which brings a 200MP camera at just $750 MSRP – and even lower during sales.

At first glance, the Mi 12T Pro design doesn’t really say anything. This is a mid-range looking device with a somewhat chunky body and little to no details to speak of.

That’s not a fault of the device itself but really, when it comes to phones nowadays, there’s very little to differentiate them – at least when looking at the front.

On the back of the Mi 12T Pro there’s a triple camera setup that’s a little too raised for my liking, since it means the phone wobbles on the table.

Still, that setup houses an incredible deal for this price point: a 200MP camera that isn’t just about the numbers but actually has a great real-world performance. It’s weird that Xiaomi chose to advertise that camera with just a discrete “200MP” written on the island, so faint you can barely see it, because this is really where the phone truly shines.

But more on that later.

First, let’s see the full Xiaomi Mi 12T Pro specs and see how it stacks up in today’s competitive market.

It’s two major things that separate the Mi 12T from the rest of the pack: that 200MP camera, an ISOCELL sensor from Samsung that, up to the time of publishing, was only found on the Motorola 30 Pro, and super fast charging.

It’s so fast, the Mi 12T Pro fully charges in 19 minutes. After a few weeks with the devices, the 120W fast charging is one feature we couldn’t go without and the charging speed is, give or take a few seconds, exactly as advertised.

The phone has a decently sized 5000mAh battery that guarantees a full day of use or two days for those who aren’t really on their phone a lot. Still, that capacity means pretty much nothing and you won’t feel stressed about battery life, since it takes you about 10 minutes to go over 50 percent.

However, if you use the Mi 12T Pro to its maximum capacity, gaming included, expect about 10 hours of screen time.

And you definitely should do that, because this phone does not overheat no matter how intense your gaming session is. According to Xiaomi, the vapor cooling chamber is 65% larger than on the previous model, the Mi 11T, and that translates to better performance during gaming.

Plus, the Mi 12T Pro has a gorgeous display that just invites you to sink into a beautiful game. It’s a 6.67-inch display with 446 ppi and 900 nits of peak brightness. It’s both Dolby and HDR10+ certified, offering over 16 million colors. Basically, it looks fantastic in all conditions, bright sunlight included.

Featuring a 120mhz adaptive refresh rate, it can handle games like the Asphalt series smooth as butter, upping the refresh rate when you game and lowering it for other apps automatically. The in-display fingerprint reader is snappy and accurate, so unlocking is easy.

Out of the box, the phone comes set to the Vivid color profile and it feels almost too bright, too vivid for everyday use. You can always pick a different color profile and, if you’re super serious about accuracy, you can set the phone to display everything in either DCI-P3 or sRGB.

Since the Mi 12T Pro was mostly tested by our photography expert, that was one feature he both noted and appreciated.

As for the rest of the specs, that depends on how much you’re willing to pay for a Mi 12T Pro. The phone is available in 8gb or 12 GB memory options, with storage starting at 128GB. Of course, all models share the same chipset, the flagship Snapdragon 8 Gen 1.

Also notable are the Harman Kardon-tuned speakers, which really sound superb, and the IR blaster.

Xiaomi is one of the few companies who still include IR blaster on their phones and I must admit: these things should make a comeback.

I was never particularly concerned about whether a phone had an IR blaster or not but, after waddling through the mess that is remote control apps to control your TV via wireless, all of them full of ads and possibly malware, this feels like an elegant solution. Plus, you never really misplace your phone, while the remote always falls prey to greedy couch cushions or bed covers.

Again, this is not a feature that really sells the Mi 12T Pro but it is one you’ll be glad to have.

On the software side, you of course have MIUI 13 running on top of Android 14, which shows your most used controls in a very user friendly screen with a simple swipe down from the top of the screen.

While I prefer a clean Android experience and miss devices who used Android One, MIUI is one of the nicest add-ons to Google’s software.

If you’re familiar with MIUI 12, the MIUI 13 upgrade doesn’t really change much functionality, focusing mostly on bug fixes. You do have a couple of new widgets and some gorgeous wallpapers to make your phone even more personalized.

And now, the camera. As previously mentioned, the phone comes with a great camera setup.

The selfie cam is a 20 MP sensor with a wide f/2.2 aperture and a simple beautify option. You can slide it around to smooth your skin and hide small flaws but you won’t find too many options here – no makeup filters, no cute cat ears and so on. Selfies taken by the Mi 12T Pro look great but also natural, without uncanny valley-type effects.

Xiaomi did include a few Cinematic Effects that add rainbows, neon colors and so on to your selfies, plus some filters for the light similar to what you’d find on Instagram.

Overall, I found the simple camera and lack of focus on beautifying options refreshing, since most major phone makers are crowding the selfie camera with way too many options.

Instead, every bell and whistle went into the primary camera, a triple rear setup with 200MP + 8MP + 2MP sensors.

All those numbers translate to some really great shots. While ultrawide photos taken by the 8MP sensor don’t look stunning, shots using the main camera and in portrait mode are gorgeous.

Even indoors with plenty of neon lights, the Mi 12T Pro photos came out great, as you can see in the gallery above. We also added more original sized shots taken by Mi 12T Pro on our drive so, if you want to see everything this camera has to offer, take a few minutes to go through them. This is essentially a very competent camera setup, one that rivals what even Apple has to offer with the iPhone 14.

Still, it’s worth noting that, while the photos taken at night look great on the display, once you see them on a bigger screen you’ll notice some noise and artifacts in the shadows.

As with other Xiaomi phones, on the video side you also have options like Movie Effects, Long Exposure, dual video taken with both front and back cameras, plus some fun stuff for social media like Vlog.

You can shoot starting at 720p at 60fps and up to 8K at 24fps. Stabilization is great for most of the shooting modes but at 8K it does fly out the window.

The 8K mode has some gorgeous details, especially when you view the footage on a big screen, but you’ll have to shoot on a tripod because otherwise everything looks jumpy.

All in all, this is a fantastic deal for someone looking for flagship specs at a more reasonable price. The Xiaomi Mi 12T Pro might look unassuming but it comes with a fantastic camera, a gorgeous display paired with loud and lovely sound, and that 120W fast charging means you’ll never really think about battery life. Compared with flagships from Samsung or Apple, which go up to 25W with their fast charging, the MI 12T Pro truly shines.

Even compared to the Xiaomi Mi 13, which uses all the latest and best, this phone holds its ground and is a good choice for the budget-conscious.