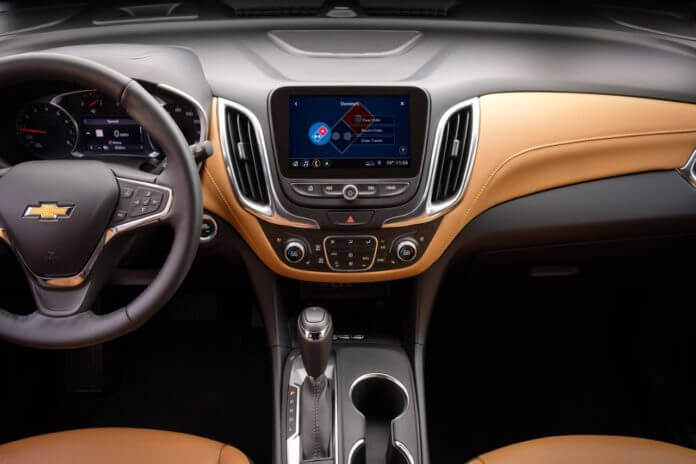 Chevrolet and Domino’s have teamed up to bring motorists a new way of ordering their favorite pizza.

The company’s Marketplace is an in-car virtual store that is available starting with 2017 Chevy models in North America. The Domino app was announced in early 2019 and is now available in the virtual store. Compatible cars receive the app via the cloud software update.

Chevrolet drivers will be able to order a pizza with just a few touches on their car’s touchscreen. The first step is to set up a Pizza Profile, that involves adding a preferred delivery address and payment method. Once set up, the app will allow drivers to order a pizza on-the-go and either pick it up at a predetermined Domino’s or have it delivered to any location. The company noted that this feature is car-specific and it’s not tied to people’s smartphones.

With the app having payment information on file, customers will be able to pay and even tip the delivery driver through the app. Domino’s full menu is available so you can go for the classic Pepperoni or create your own favorite pizza.

If you’re not a regular Domino’s customer the app might not be as much use to you but this seems like the beginning of an in-car marketing revolution that will change the way motorists shop forever.

At the moment only Chevrolet and Fiat-Chrysler Automobiles (FCA) cars are compatible with the app, but It’s only a matter of time before the feature spreads to Chevrolet’s sister companies, like GMC and Cadillac. We also expect Ford to try to keep up with its rivals.
We will see if Ford decides to follow and get the same Domino’s app in their cars or strike a new partnership with other giants like Starbucks or Burger King and become an innovator to the business.

Surely, it won’t be long now until ordering a pizza, a coffee or a burger using your car’s infotainment system will become a normal part of commuting or road-tripping for motorists who drive a late-model car equipped with a touchscreen.

Also, Mercedes-Benz has announced the trial on its own e-commerce platform that will let vendors sell anything, from designer shoes to budget-friendly light bulbs. We expect to see most transactions made with smartphones today to be available in the car by the middle of the 2020s.