The YouTube comments section is not necessarily the best place to find yourself at, unless you really want to know what everyone’s opinions about the contents of a video are.

While on occasion the comments might actually offer more details and interesting insights about the subject of the clip, if you choose to scroll down through them, most of the time you’ll find yourself knee-deep into sarcastic comments and memes.

Quite often, users also use the anonymity the comments section offers them to gang up and bully other users. It’s a double-sided coin, to say the least.

Of course, you could choose to just watch the video and not scroll down but YouTube wants to take it a step further by giving you the option to completely hide the comments from view.

According to a report from XDA Developers, YouTube is now testing out a new feature that completely changes the way the comments layout will present itself to the users.

This change will see a new button next to the Like and Dislike buttons that will allow the users to access or not see the comments section. Instead of seeing the comments under the video, YouTube will be showing what video will play next. 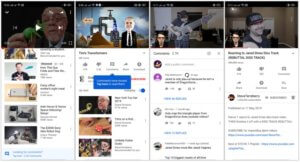 If you do press the Comments button though, the comments section will open up in an overflow window.

However, the “Save to watch later” button will be hidden in order to make space for the Comments section. The users will be able to access it by tapping the downward arrow that would have normally revealed the description of the clip.

YouTube hasn’t made any official comments about why exactly it chose make this change – it might be just a redesign move or the platform actually intends to help us interact with the comments differently.

For now, the change has only been seen in India, with very few reports of it making an appearance in other parts of the world, so we can assume it’s probably a change that is currently being rolled out a few countries at a time.

However, simply hiding the comments section doesn’t really do much to deal with the trolls or the abusive comments.