Zepp E Circle Review: Probably the Best Design for a Smartwatch Yet 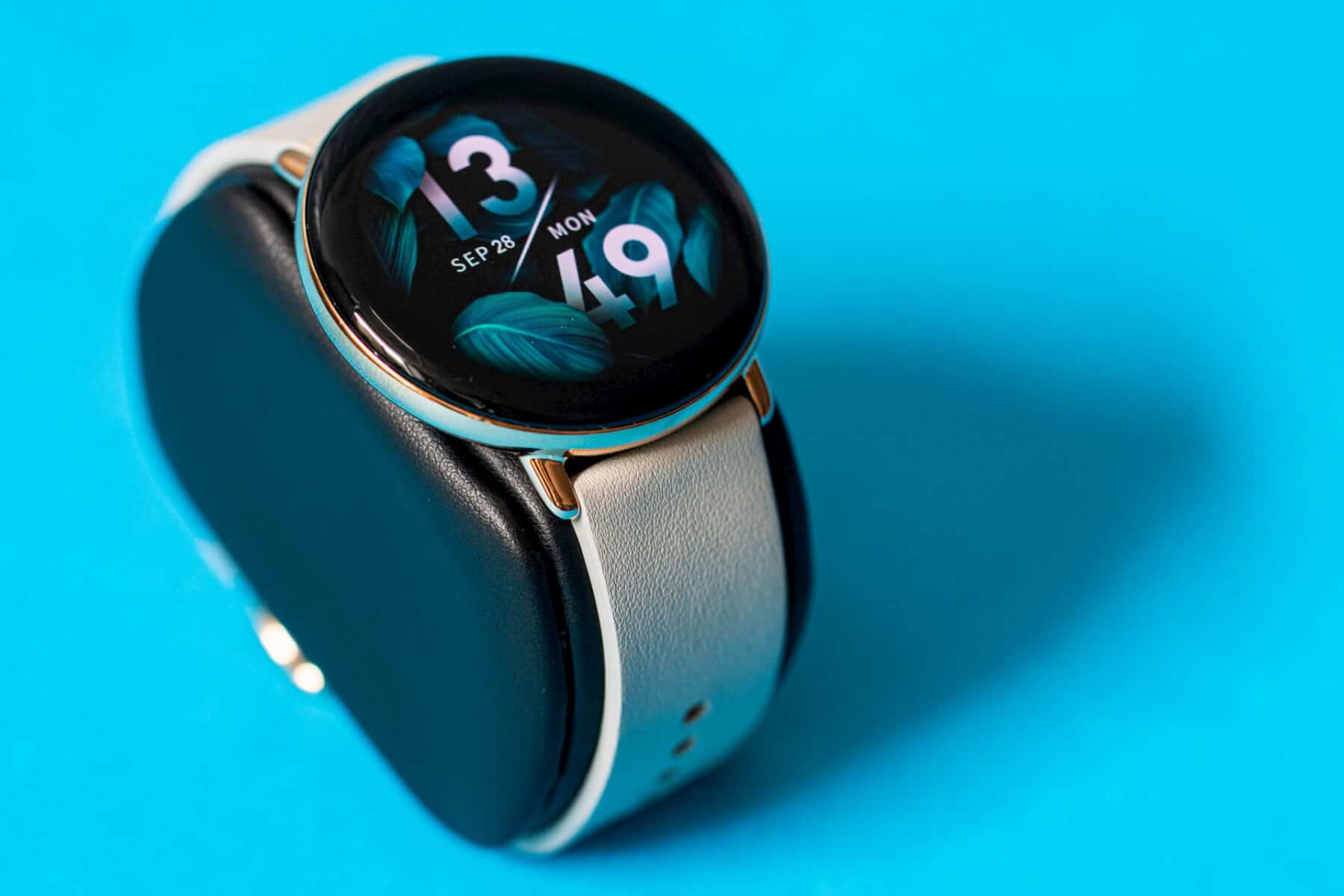 At first, the design of the Zepp E smartwatches was what blew us all away. It opened our eyes to what a smartwatch could and should be – smart but refined, techish but timeless. The Zepp E circle impressed us so that we named it “the round smartwatch we deserve”. After weeks of wearing it day and night, I’m inclined to stick to that bold title. And no, this is not an advertorial 😉

Sure, beauty is in the eye of the beholder but I don’t think many could find one visual flaw in this smartwatch. In fact, mom believed it was a piece of jewelry at first, a stylish accessory, and nothing more. How could she have missed the display, you ask. Easily – the screen is pure black when the wearer is not looking at it.

The thin, leather grey band helped, as did the rose gold stainless steel finishings and the curved corners that seamlessly fuse with the back of the case. It’s true, Moon Grey was my preferred color variant, but there is an all-black one that you might be extremely tempted to get because it’s an even more minimal, more modern take on wristwatches.

That’s not to say this smartwatch isn’t every bit next-level when it comes to wristwatches. I’ve never been a fan, especially after mobile phones came onto the scene, figuring I could just check the hour there. And smartwatches were, in my mind, an extra headache, a wearable smartphone that I didn’t need.

But the Fitbit Inspire HR changed my mind with its heart rate monitoring and activity tracking – including yoga, bless’em! – but now, the fitness band is in danger of being replaced permanently with this one.

Zepp E Circle: so lightweight, you won’t feel it

Why? They’re equally light. See, one of my issues with wristwatches was the added weight and pressure it put on my arm, a place where I’d much rather wear a bracelet – you know what I mean. But the Inspire HR was light as a feather and the Zepp E isn’t any different. It weighs just 32 grams and it’s 9mm thick, so I barely feel it.

Now, usually, if it’s lightweight it has to be built with cheap materials, right? A compromise I’d rather not make, by the way. However, this smartwatch doesn’t feel cheap at all. All the stainless steel, leather that doesn’t crack or stick to the skin and finishings make it look premium, something I can wear at the office and… at a wedding – as I did last weekend.

It’s stylish enough to make fashionistas drool at the sight and minimal enough for the Millenial man. There’s no scenario where I wouldn’t recommend wearing it – not even underwater, by the way – with one exception: the great outdoors. Meaning: it’s not something I’d see Bear Grylls wear or you, if you’re into rock climbing or trail running.

The watch faces are extremely versatile, from artsy ones to activity-focused designs or models that mimic a traditional wristwatch. I found the perfect one for me easily – a lush design that blends with the black edges of the display. By the way, Zeep put some thought into the UI as it follows the natural curves of the watch.

The 326ppi screen is crisp and rich, and the response time is great. Zepp used the scrolling gesture to its fullest; scroll up and see notifications, down and see battery levels, time, temperature and forecast. You’ll also get surprising features like flashlight (the entire screen is filled with light), find phone which prompts a loud, too loud ring from your paired smartphone, screen lock (to unlock, you press the side button for a couple of seconds).

Not surprising but still nice to have are brightness adjustment, battery saver mode, and keep watch awake. The latter will keep your phone lit up for 20 minutes while draining your battery – don’t know why you’d want to do that, but hey, if you’ve got any idea, comment below!

I’ll refrain from a complete walkthrough but I’ll say that the widgets you can access from the watch are heart rate monitoring, PAI score, music, temperature and weekly forecast, and of course, basic activity tracking (steps, km or miles, calories).

The side button I mentioned before is also responsive, either giving you access to the list of available widgets or the list of trackable activities. And I also discovered that a long press of the screen will pull up the available watch faces so you can change them on the go, no phone needed.

Zepp app: where is stress monitoring?

However, you will need the app to get a detailed view of your progress in almost every aspect of your life. And you won’t hate the app as much as you might think. If other fitness apps get rare updates, barely sync and have a bad UX, the Zepp one doesn’t.

Quick tip: the Zepp app is actually the Amazfit app, now rebranded and improved. That’s why you’ll get the option to add devices such as a Mi scale to track weight and other body measurements.

Once the sync is done, you can check steps, calories, sleep, heart rate, PAI progress and stress levels from the homepage. Theoretically – in reality, the stress monitoring feature is not here yet but Zepp says it will become available via OTA. To be honest, I’m not in a hurry – something tells me I’ll know when I’m ready to break something without the watch alerting me.

In the long run though, tracking your stress levels might reveal a mental health issue the user should address, so I could see its usefulness in that scenario.

You can access all of the above to get more in-depth info. To be honest, I’ve been that curious only with my sleep tracking. I mean, for the rest of the time I’m awake, but what happens during the night, right? 😉

Joke aside, the sleep monitoring feature goes beyond what my Fitbit app does. Besides breaking your sleep in stages and showing your progress, in the Zepp app you can see reference values for comparisons, get recommendations about how to improve your sleep, but you can also help the system figure you out by adding pre-sleep activities and wake-up moods. Plus, short naps (no longer than 20 minutes) are monitored too… and let’s face it, if you can replace another coffee with a power nap, why not do it? #workfromhomeiseverything

Another thing that will get your gears turning is the PAI menu. What the hell is PAI? It stands for Personal Activity Intelligence, my friends, and it’s a thing invented in Norwegia, a new sort of scale for overall health. A score over 100 shows you are keeping yourself in shape, enough to avoid heart complications and such. Failing to get your daily exercise? Zepp will remind you to move your body not only through sedentary reminders, but also through specific PAI recommendations. Honestly, I don’t know how accurate they are but in my book, workout incentives can’t hurt.

Before we wrap this up, you should know there’s a way to unlock your phone with the watch – although I couldn’t make it work. It could be because my smartphone doesn’t allow it. And you can customize haptic feedback for notifications and incoming calls in the app.

Speaking of vibrations, those are light but noticeable. I haven’t missed one wake up alarm since wearing the watch, but I used to miss it regularly when I relied on my phone’s ringtone. However, you might want to give up on the sedentary reminders vibration – if you’re not committed to moving around every other hour and instead are glued to your keyboard, the feature will only annoy you.

I’m struggling to find things I hate about this watch, to be honest. Even charging was a breeze. It wasn’t the fastest charging I’ve experienced, that’s for sure – about an hour to take it from 0 to 100% – but connecting the pins is instant and the smartwatch comes to life the moment you plug it in.

Really. It will show you only the date, hour and day of the week during charging, but that’s more than most premium smartwatches do. As for battery life? It lasted me 7 days in normal use – verifying stats and sleep tracking daily, with heart rate measuring every couple of days.

There is one thing that bothered me throughout testing, I remember now – blood oxygen measuring. This feature did not work for me at all at first. No matter how still I sat, with my left arm on the desk, the sensor did not pick up anything the first 5 times. Finally, it picked up my blood oxygen stats but a word of caution: it might take a few attempts to get it going.

Bottom line: the Zepp E series is no match to a Garmin or even a rugged Amazfit. But it’s not supposed to be. Instead, these smartwatches not only blur the line between traditional wristwatches and smartwatches but take the wearable design into the future, slimming the case and refining the UI. Zepp E Circle sits at the crossroads between a watch and a fashion piece, subtle in its fine lines but bold in its graphics. With a $250 price tag, features that are vital to a smartwatch today and flawless functionality, it will be hard to compete against it. In fact, I see a bright future for the smartwatch, if Zepp fixes the small bugs I encountered. But what is the biggest proof that this watch is worth it? It won’t come off the wrist after this review is up.