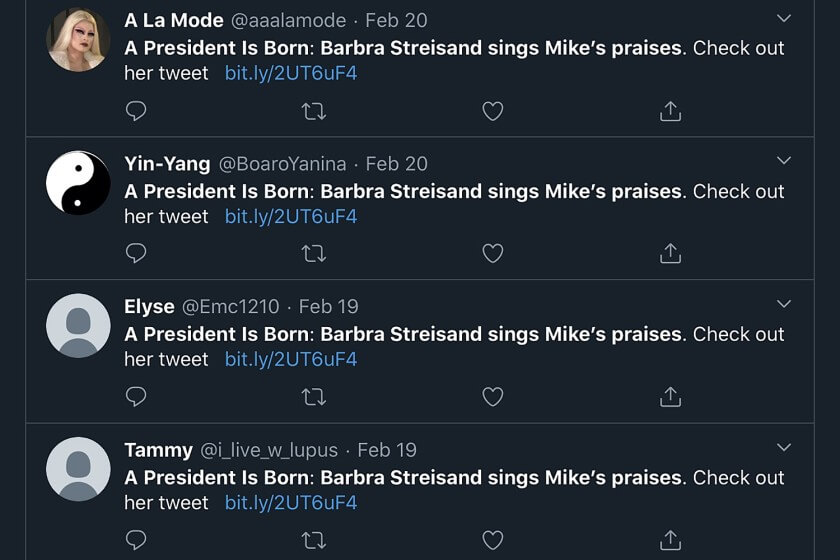 Around 70 accounts were shut down after a Los Angeles Times report uncovered they pertained to deputy digital organizers paid to send campaign messages pro Bloomberg. It seems that the campaign staff paid up to $2,500 per account for a series of political tweets. Only Twitter saw right through the series of identical text, images, links and hashtags in their posts.

This “copy-pasted” content that was posted at the request of others and paid for was in breach of the social media platform’s rule. More specifically, “creating multiple accounts to post duplicative content,” “posting identical or substantially similar tweets from multiple accounts you operate” and “coordinating with or compensating others to engage in artificial engagement or amplification, even if the people involved use only one account.”

To keep track of all the tweets and schedule them ahead of time, the campaign used app Outvote. This allows users to send pre-written messages, post campaign materials for them and gather the data tracked, sending it back to the source.

For this behavior, Twitter took immediate measures. The platform suspended the accounts involved in the campaign immediately. No account will be unsuspended until the owner proves that they’ve been in control of them. Even then, volunteers and supporters will have a chance at getting their account back but those that were paid by the staff don’t have the odds on their side.

“Through Outvote, content is shared by staffers and volunteers to their network of friends and family and was not intended to mislead anyone,” commented Sabrina Singh, a spokesperson for the Bloomberg campaign.

Bloomberg has spared no expense, his campaign costing more than the other four democratic candidates’ combined. But, hey, did you expect any less from the ninth richest man in the world, with a net worth estimated at $61.9 billion?