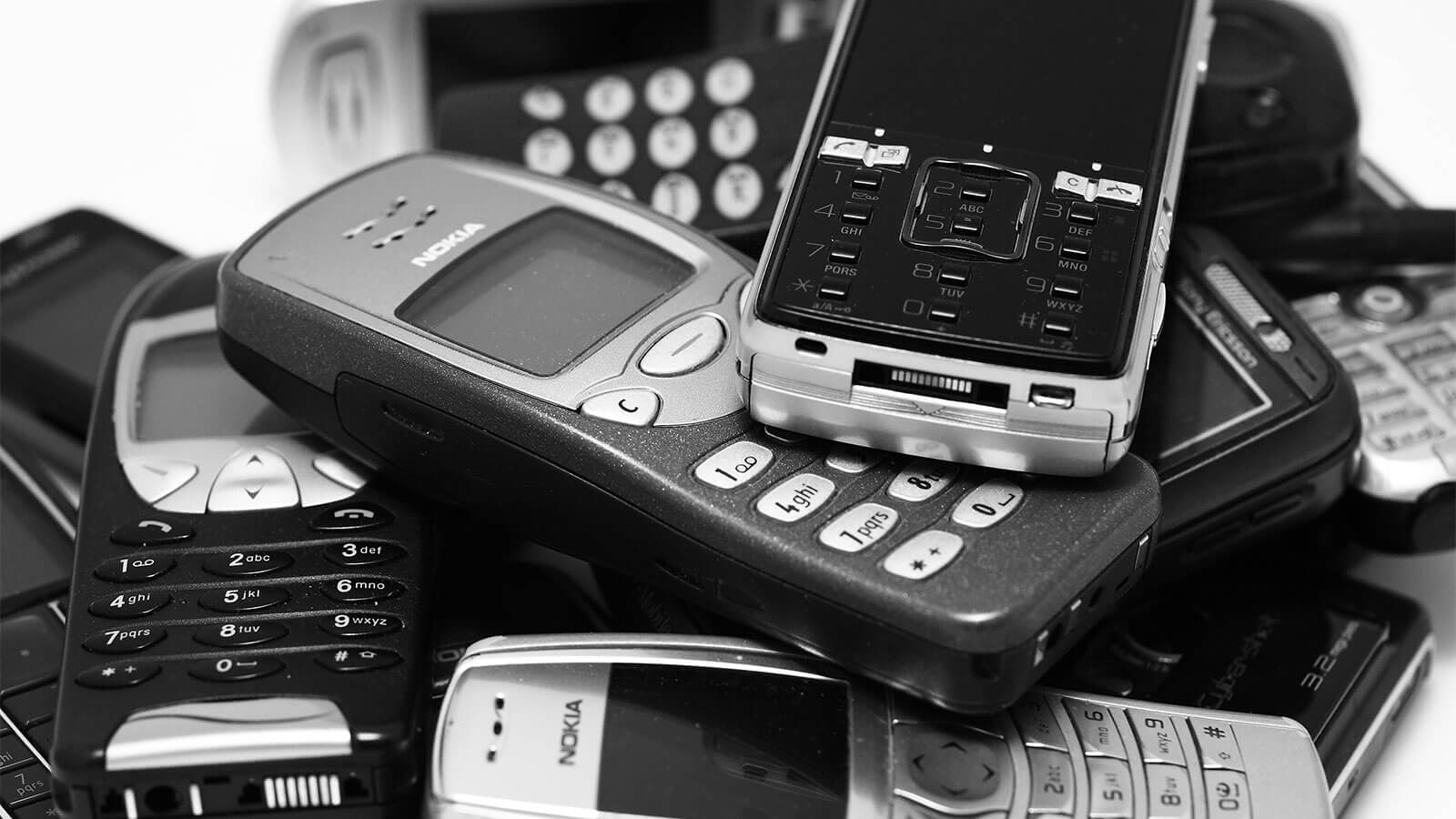 Popularized in countless action movies of the 90s, you’d think they went extinct along with the idea of privacy but, in 2021, burner phones are still a thing.

What is a burner phone? As per the old-times definition, a burner phone is any cheap, disposable phone that you simply throw away when you don’t need it anymore.

Long thought to be the mark of a criminal trying to evade authorities, burner phones can also be the choice for people concerned with surveillance. In the name of privacy and to fight online tracking, a burner phone can be a very valuable tool.

Fortunately, the answer is no. Anyone can have a burner phone and a burner SIM card.They have many uses, and not all of them are illegal like you see in the movies.

Burner phones can also act as a backup for emergencies – a dumb phone with a prepaid SIM you take with you on holidays, just to have a backup in case you lose your primary device.

They can also act as a phone with a SIM from another company with better coverage that you keep in the car to use when your main provider’s service is spotty. Since cheap burner phones are usually not smartphones and instead have very limited features, their battery life is incredible. If you rarely use them, they can go up to a month on a single charge, so they’re great to have on hand.

Of course, a true burner phone means that it’s completely disposable – it’s so cheap, you can buy it anywhere, and you can throw it away, along with the SIM card as well.

By far, our favorite use for a burner phone is as a way to avoid annoying marketing offers. Know all those services that text you incessantly, even after you opt out of marketing communications? Just use your burner phone with its burner SIM, and all those messages will go to a phone you rarely use. Just select all the messages once in a while and bulk delete them and you’re set to go – no more sales you just “can’t miss.”

Need a Phone with Amazing Battery Life? We Found Five for You

Can burner phones be traced?

Still, a lot of people turn to burner phones as a way to protect their privacy. Even though they have “nothing to hide”, as the old saying goes, people still want to make calls, text and buy things without that information tied to their personal profile.

In countries where prepaid SIM cards are available without having to show ID, if you buy a SIM card and burner phone with cash, that purchase is anonymous and almost impossible to trace.

When it comes to actually tracing a phone, security experts are divided.

Some say that, with the proper steps taken, burner phones can’t be traced, and others say you should always assume that a sufficiently sophisticated tracker would find a way to keep up with you.

After reviewing countless guides, we think it’s best to err on the side of caution and say that yes, burner phones can be traced.

First of all, anu phone operator has access to your call logs, text messages, data usage and location off the signal bounced off towers.

Using a burner phone bought anonymously and using a prepaid SIM card topped off using only cash is a way to add a layer of privacy over your activities but not an infallible one.

Thanks to advances in voice recognition software, you making a call, even an encrypted one, could also be a dead giveaway to your identity.

In short, burner phones can be traced, so err to the side of caution if you want to use them for risky purposes.

If you want to use a burner phone as an emergency device, we compiled a list of affordable options with decent specs and battery life – see them below and what they cost.

If you’re thinking of a burner phone just to avoid cold callers and marketing followups, we also have some great choices of apps that can save you money and time.

How much is a burner phone?

We looked high and low and found that burner phones can start as low as $20 but you get the best deals at around $50. We narrowed down our list of the best burner phones at just 3 options – take a look and what they have to offer before you go shopping.

Nokia 3310 3G – A Month of Standby and Nostalgic Design

Remember the most sturdy phone in existence? That’s our best choice for a burner phone: the new Nokia 3310 3G.

Since the classic one only had 2G and is almost impossible to find nowadays, you should go with the updated one. It looks similar to the original model but has been made a bit sleeker but it keeps what we loved about Nokia 3310.

It has an insanely long standby battery life, of more than 30 days, and can handle pretty much any rugged condition.

And yes, it also has Snake. Check it out here.

An even cheaper and more discrete option is the Nokia 105 2G. While the Nokia 3310 3G might draw looks and comments thanks to its iconic design, the Nokia 105 is so understated that absolutely no one would give it a second glance.

The Nokia 105 2G also has an impressive battery life of 25 days in standby, so it can work great as an emergency burner phone.

This Artfone 3G/2G device is a cheap burner phone with big buttons that’s perfect for elderly users – and it’s also a flip phone, so double points for nostalgia!

With dual displays and a feature that lets you do call up to five numbers by simply long-pressing the SOS button, this is a winner if you want to give your parents a secondary phone.

Unfortunately, the battery life isn’t as good as what you’d get from a Nokia phone but the flip design means you can easily check the time or missed calls without turning on the big screen and consuming battery.

If you don’t want to go out of your way to buy a secondary phone and another SIM card, there’s always the option of burner phone apps.

Whether you’re looking for a burner phone app for Tinder or other subscription-based services, there are plenty of options.

This is the most convenient app we tried so far in the US.

Instead of you having to buy a disposable burner SIM card, Burner gives you a disposable VOIP number – you can use it to receive spam from online shopping, for dating, for buying or selling things on Craigslist and so on.

All the texting and calling is done from the Burner app and you can create multiple phone numbers. Once you have no use for one, just ‘burn’ it and that’s it.

Still, keep in mind that privacy isn’t a main feature of this app.

The Burner app is free to download and has a trial period, then has a subscription starting at $4.99 per month.

If Burner is US-only, another alternative is Hushed. It works just as well, with options like call forwarding and auto-replay, but gives you burner numbers for 40 countries, including Canada and the UK.

Starting at $1.99 per month and letting you access your Hushed phone number from anywhere in the world online, this is a great service if you travel a lot.

Here, the drawback is that Hushed phone numbers aren’t guaranteed to work with the 2FA required by most apps.

“Hushed phone numbers are NOT guaranteed to work with third-party verification due to blocks implemented by certain services, for example, Social Media, Banking, Email, Apps, etc.

We do not intentionally block anyone from receiving these codes, but it’s common that some services will prevent verification texts from being sent to certain phone numbers due to their own security policies,” says the company.

For the privacy-oriented people who don’t want a burner phone call showing up in their call logs.

CoverMe Private Messenger gives you a US or Canada phone number, so you can use it to subscribe to apps or hide your main number from unwanted contacts. Using VOIP, it lets you make anonymous, encrypted phone calls in the US, Canada and China.

Everything on CoverMe is end-to-end encrypted and there’s even the option to set disappearing messages like on Signal or other secure chat apps.

For the extra careful, CoverMe lets you hide everything, from text messages, call logs and contacts with a simple shake – just shake your phone if you feel someone staring over your shoulders and everything will be locked away.

So, what would you choose? Do you need an actual burner phone or a burner app will do the trick? Tell us in the comments if you have a tip to add to this guide and we’ll update it accordingly.

Affiliate disclosure: We may receive compensation in connection with your purchase of products via links on this page. The compensation received will never influence the content made on this website.