We Tried Digital Festivals and Partied On Zoom - What Next? 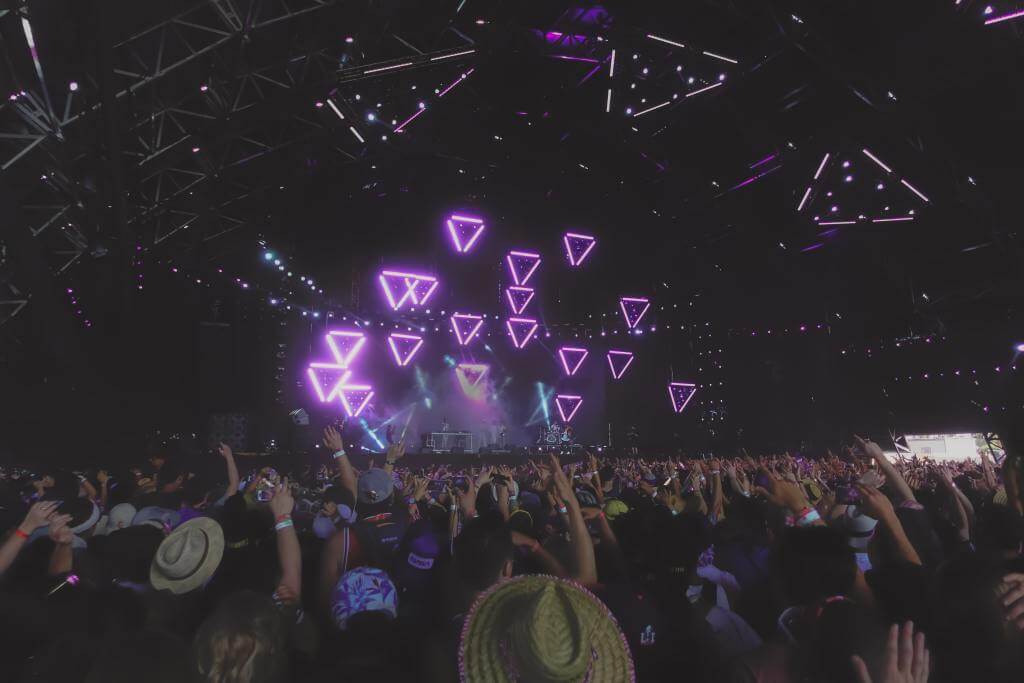 This year, everything fun mostly happened online. Let’s see what happened when we all had to adjust to stay indoors and how the entertainment industry responded.

A friend of mine told me about the time he was the DJ at a small party.

To stop people from coming up to him with song requests, he took a big piece of paper, wrote down his phone number, and asked party attendees to text him instead.

While we were laughing at the way he mixed tech with old-fashioned pen & paper to enforce social distancing rules, it once again hit me how different 2020 is for those looking to have some fun.

Certainly, content creators and event organizers had to change their tune overnight in order to reach their audience.

How did some manage to keep the party going and spirits high during an unprecedented crisis? What will the future bring for entertainment? Is there any silver lining to be found at all? 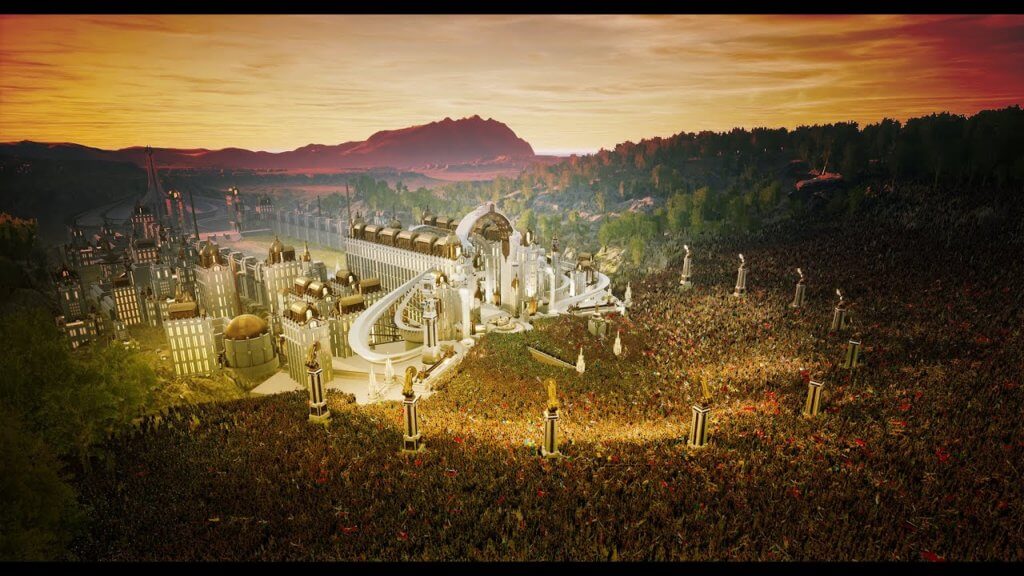 The phone used to be the gateway to social networking, a device made for sharing photos, life updates and event invites.

Starting this spring, it became the window to the entire world, erasing the boundaries between online and offline – getting the news, using apps to see how crowded a spot is, trying AR to see how to position yourself in a queue, downloading contact tracing tools and, of course, for any and all entertainment purposes.

Being an online festival guest is fun, I guess? 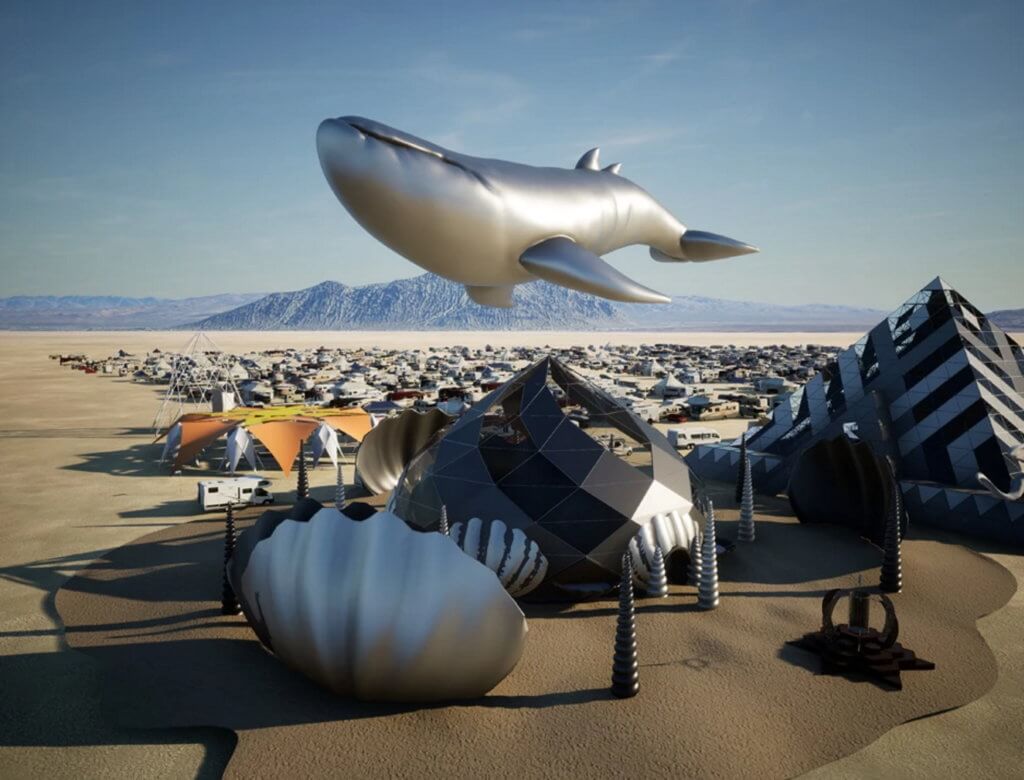 For me and many others, 2020 is the first year we had the chance to attend the Edinburgh Fringe Festival, Burning Man and other legendary events.

It cost almost next to nothing and had us sitting on our couches, phone in hand and, ideally, looking at a big-screen TV.

We used Minecraft for a party, put on a VR headset or browsed through a social distancing festival to discover up-and-coming artists.

During lockdown and after, my bookmarks tab was full of amazing concerts, theatre plays and various other virtual artistic acts I wanted to attend (here’s a round-up of recommended activities to survive the utter boredom).

While the COVID-19 situation remains grim either way you spin it, it did unlock new opportunities.

Suddenly, you could, in a way, participate in these otherwise expensive and time-consuming events, simply by opening a new browser tab. I even saw Travis Scott live…if by live you mean a live-stream 3D model of him as a huge human stomping around in Fortnite.

And, after missing what some called “The Best Music Festival”, a virtual event held in Minecraft, what I was really looking forward to was Burning Man 2020.

Certainly, there was no better context or time to finally experience Burning Man, a festival with deep ties to technology and technological advancement.

As its founder Larry Harvey put it decades ago, the festival is “a compelling physical analog for cyberspace”.

Yet, he also said that a real community can only be attained through the experience of certain primal unities in the physical world, which might explain my reaction to exploring the Burning Man Multiverse.

I got a hit of nostalgia seeing the early 2000s-style websites, followed by a headache thanks to the colorful graphics and fonts…plus a sneaking suspicion that I was maybe too old for this.* 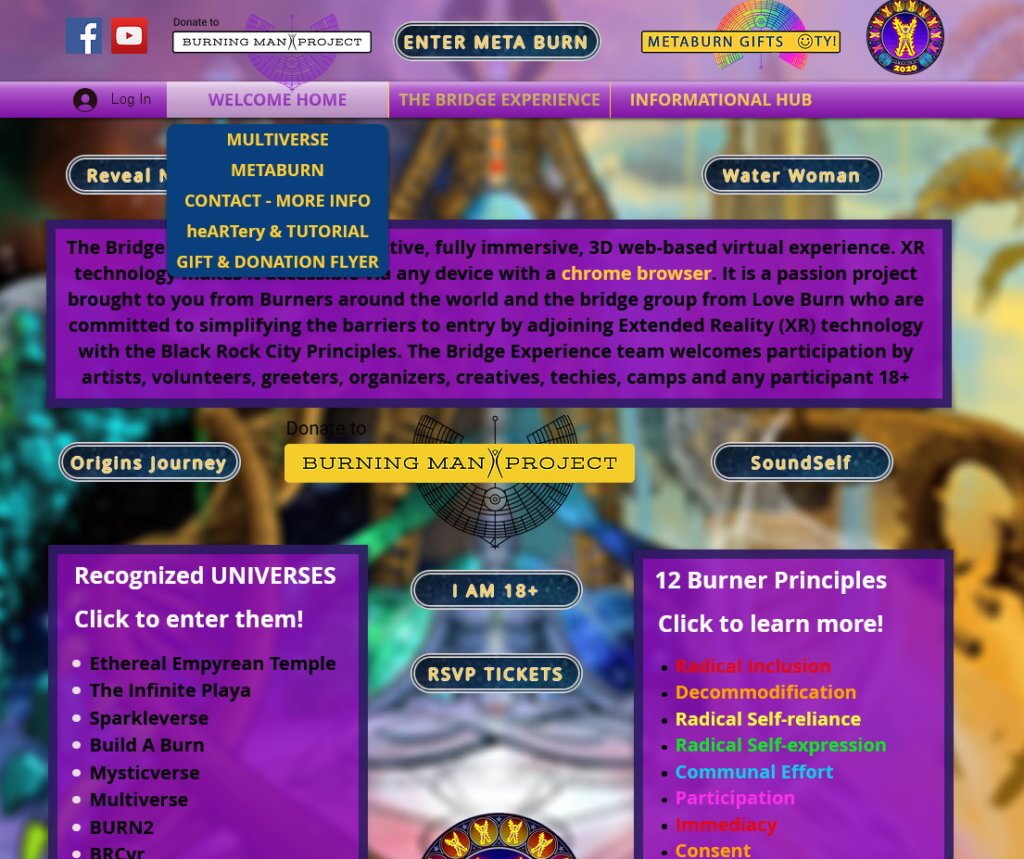 Still, I can appreciate the concept and rejoice in the fact that I got a chance to witness it, even in a virtual setting.

Last year, the BBC and many others asked if “the rich are ruining Burning Man”.

It was a sentiment born out of the increasing numbers of influencers, marketers and Silicon Valley execs leveraging the festival’s aesthetic to promote their wares. The luxury accommodation to the tune of $25.000 for a ‘single Bedouin tent’ with AC and minibar certainly did not help the perception of the event.

This year, the move to an online-only space accidentally made some of Burning Man’s 10 principles and community values a reality.

The fact that most of them were free to view for anyone is definitely what “radical inclusion” stands for.

And yes, you could also make a point of Burning Man 2020 being the first time the festival truly fulfilled the “Leaving no trace” part, with no quantifiable environmental impact.

From virtual-reality experiences to Zoom parties, live-streamed concerts and print-your-own burnable effigy at home, 2020 festivals and events looked nothing like what partygoers saw before.

SXSW, which was supposed to take place between March 13 to March 22, was one of the first “casualties”.

While the organizers wanted to go forward with their plans, a Change.org petition to cancel the event was signed by more than 55K people, including industry leaders like Twitter CEO Jack Dorsey, prompting the cancellation of an event that ran for more than 3 decades. 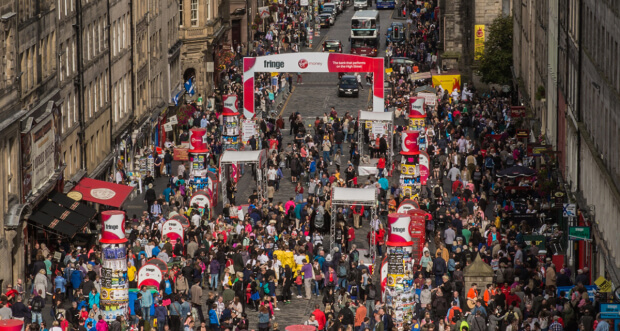 For the past 73 years, the Edinburgh Fringe  was the biggest arts festival in the world, a month-long affair where thousands of artists from around the world filled every corner of the city with concerts, plays, dance-offs and other acts.

This year, it was transformed into a series of free or pay-what-you-want live-streams designed to support the artists who lost income. 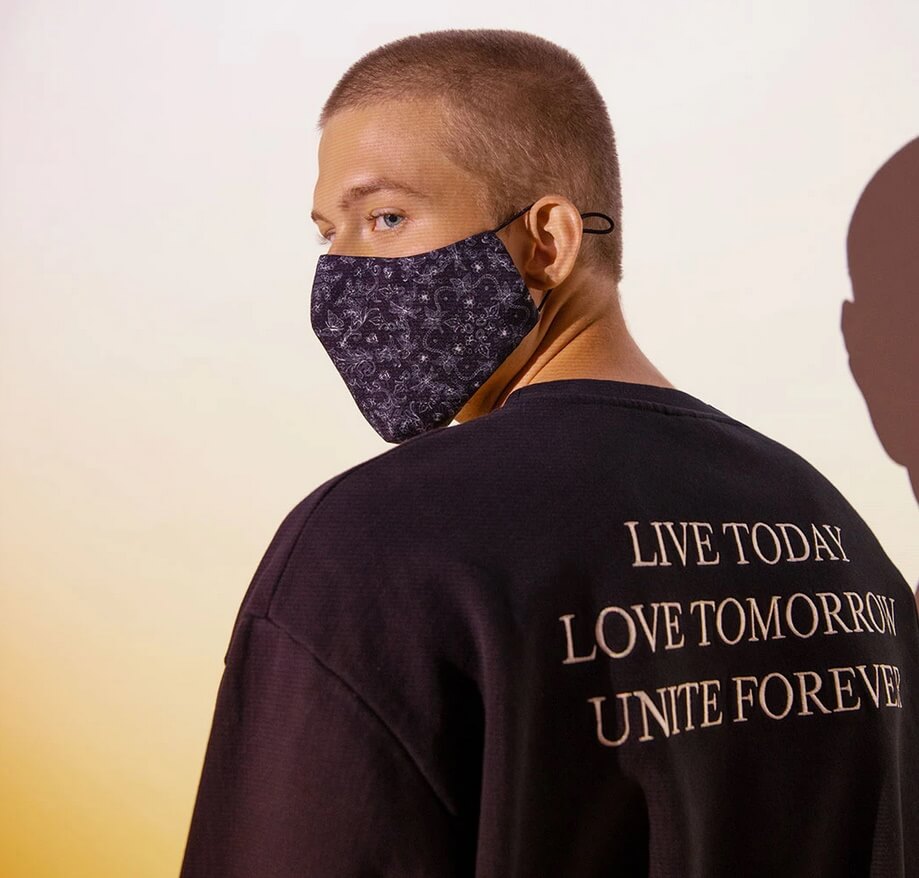 Considering the fact that the general access pass for Tomorrowland Belgium retailed for € 281 and taking into account the travel costs for most major events, it was undoubtedly a good deal for those who just wanted to hear some new sounds.

Do virtual festivals work for artists?

Online, you have to count ticket sales, video views, story views, game participants, simultaneous Twitch viewers… there’s a dozen ways to look at things and no one actually releases the numbers.

But, while talking to some friends in the business, I got some grim replies.

Even with live-streaming and crowdfunding, the entertainment industry (and independent artists in particular!) were dealt a heavy blow.

Tomorrowland, for example, did earmark $10 million to pay the artists based on how many views they got and overall ticket sales, but they could afford to do so.

The weekly “United Through Music” live streams had more than 25 million active viewers but these are the exception, not the norm.

Take these other big events forced to pivot online:

Two of San Diego Comic Con’s online panels had more than 200,000 views each. For viewers, this is amazing, since the panels at the physical event itself had room for just 6,500 people, but organizers probably made pennies (compared to selling thousands of physical tickets, at least!)

Even in the case of Comic Con, a social media firm pointed out that views and tweets were overall down by 95% from the previous year.

I noticed a lack of participation in some virtual events and festivals myself.

Going from room to room in Burning Man’s multiverse, I struggled to find groups larger than 100 people. 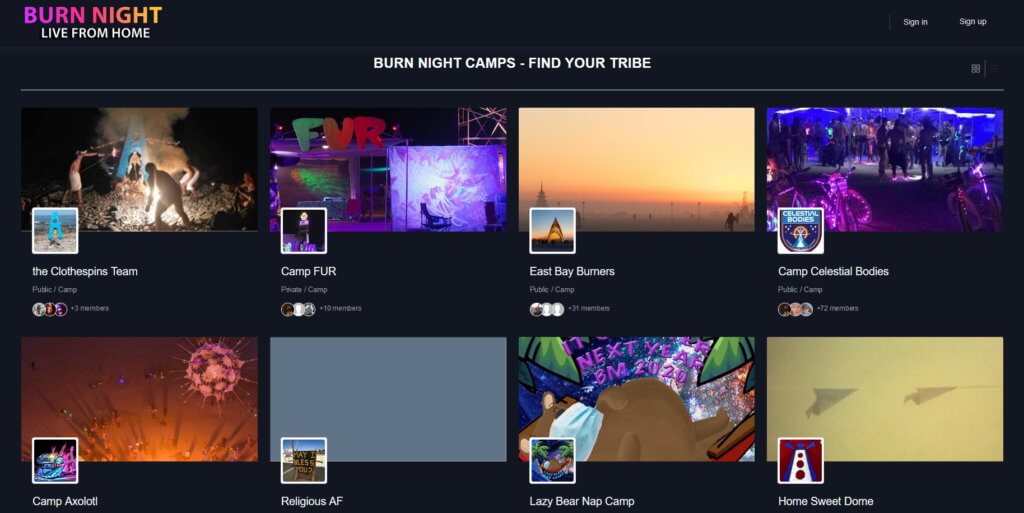 I sometimes look at Mike Shinoda (of Linkin Park)’s videos and they barely seem to break the 2000 views barrier, even though he has more than 80K followers on Twitch.

It makes sense, since after the lockdowns were lifted, most of us wanted to live offline for a bit and online consumption went down.

No doubt about it, the current situation makes it extremely difficult for artists and venues to keep the lights on.

Is there a ray of hope somewhere?

I think there is and while it’s not obvious at first glance, the immediate future will bring some tangible improvements.

What’s the future of fun?

At first glance, you’d think the only tech-thing that entered the popular consciousness this year is Zoom, an app whose name became synonymous with video conferencing…and surpassed ‘Facetime’ in popularity.

Even though some hailed VR headsets as the must-have lockdown gadget, I have not heard any friends or acquaintances saying they bought one.

However, all of us became a little bit, or a lot more tech savvy.

Back in January, eMarketer was pointing out the yearly increase in the number of Internet users who say they do not understand computers and new technology. 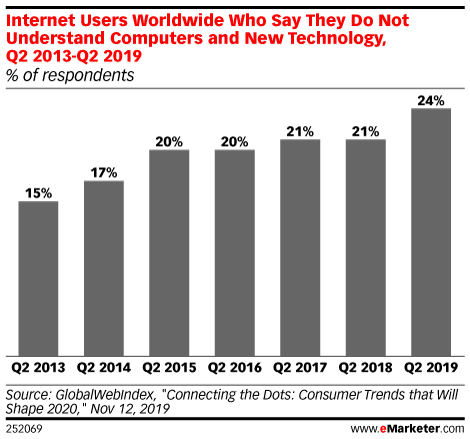 If I have one certainty, it’s that 2020 will start bringing that number down again.

Unprecedented numbers of students had to adapt to remote learning. Adults worldwide discovered new ways to be entertained online.

Before 2020, if you were having fun, you’d probably forget to check your phone until you had to text a friend or post a story.

Now everything, including fun, happens online, so tech will adapt to accommodate.

We are using the same gadgets and tools but we demand more from them, increasingly needing new forms of entertainment or avenues of connection and self-development.

These expectations as consumers apply tremendous pressure on events organizers, service providers, artists, tech companies… and the list goes on.

A betting man would go all in on VR as the solution for most of these challenges. I’m still unconvinced.

What I know for certain is that we’re about to see a huge leap for affordable consumer technology and entertainment.

Because the context demanded we move most of our life online and rethink how we do things, market forces will naturally respond to this and offer experiences better tailored to our needs.