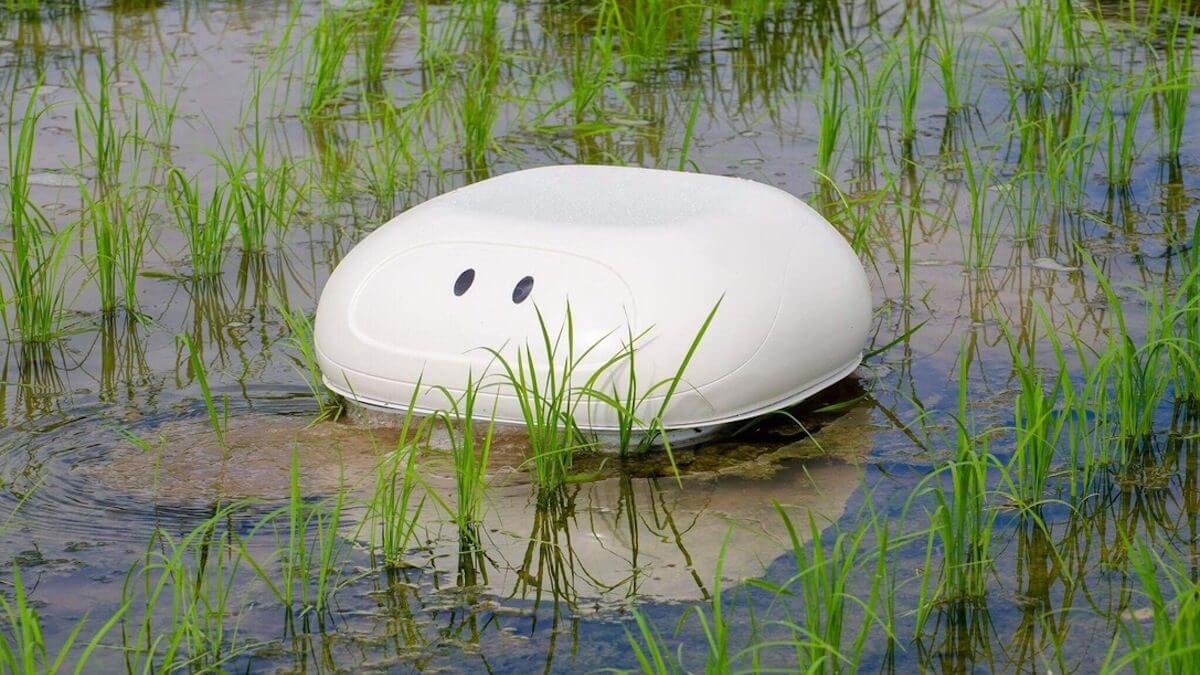 If you happen to travel across northeastern Japan and go to admire the terraced rice paddies in the Yamagata Prefecture, you might soon spot an interesting figure among the rice farmers, as it glides across the water.

While it glides like a duck and kind of paddles like one, the white shape with inquisitive eyes is actually a machine that takes its name after the Aigamo duck breed.

Since centuries ago, rice farmers have used the Aigamo duck as an alternative to pesticides. The ducks, as they travel across the rice fields, tear up the weeds and get some healthy insect snacks on the way all while keeping the fields healthy – even their droppings act as extra fertilizer.

Of course, through the years, the practice has dropped in popularity but that doesn’t mean that it’s not needed anymore – the Japanese farmers aim to reduce the use of herbicide and pesticide on their rice crops as much as possible.

That’s where a Nissan engineer called Tetsuma Nakamura came into the picture: he built a robotic alternative to the ducks that weighs 1.5Kg and bares the semblance of an oversized Roomba.

It paddles like a duck as well, thanks to two rotating rubber brushes set on its underside, which oxygenate the water when they stir it up, preventing the weeds from rooting or receiving enough sunlight to thrive.

The robot uses Wi-Fi, batteries, solar power and GPS to navigate the fields.

The engineer has begun building the robot more as a DIY project and has no plans to commercialize it for the moment – there’s not even enough data to say if it’s actually effective or not. But none the less, Nissan seems to support its employee’s efforts as the company even released a video about the robot on its official YouTube channel.

If you’re curious to watch Aigamo in action, you can do so in the video below.

About two thirds of the Japanese farmers, be they rice farmers or otherwise, are over 65 years old and the country’s aging society has seen most of its young citizens migrate into cities. This migration poses a risk to the country’s agriculture and the survival of the farming industry so it’s no surprise that the farmers are turning to technology to keep it going.

Panasonic has already introduced a Tomato Harvesting Robot to the market during the 2017 International Robot Exhibition  that took place in Tokyo. According to the company, the robot increased harvest efficiency rate from 80% to 96%.

But it’s not all about the hardware: real-time farm monitoring also plays a big part in a farmer’s job and AI can lend a helping hand into making all that easier.

In addition to that, the system also uses voice recognition technology and uploads all the crop information into a database that aims to help reduce the workload of the farmers and overall increase planting efficiency.

These are just two examples of how Japan is tackling its farming problems with tech-savvy solutions that aim to maintain the country’s farming tradition alive while gently steering it it into a future of robotics.