Everyone's Going to Live in a 3D Printed House - But When? 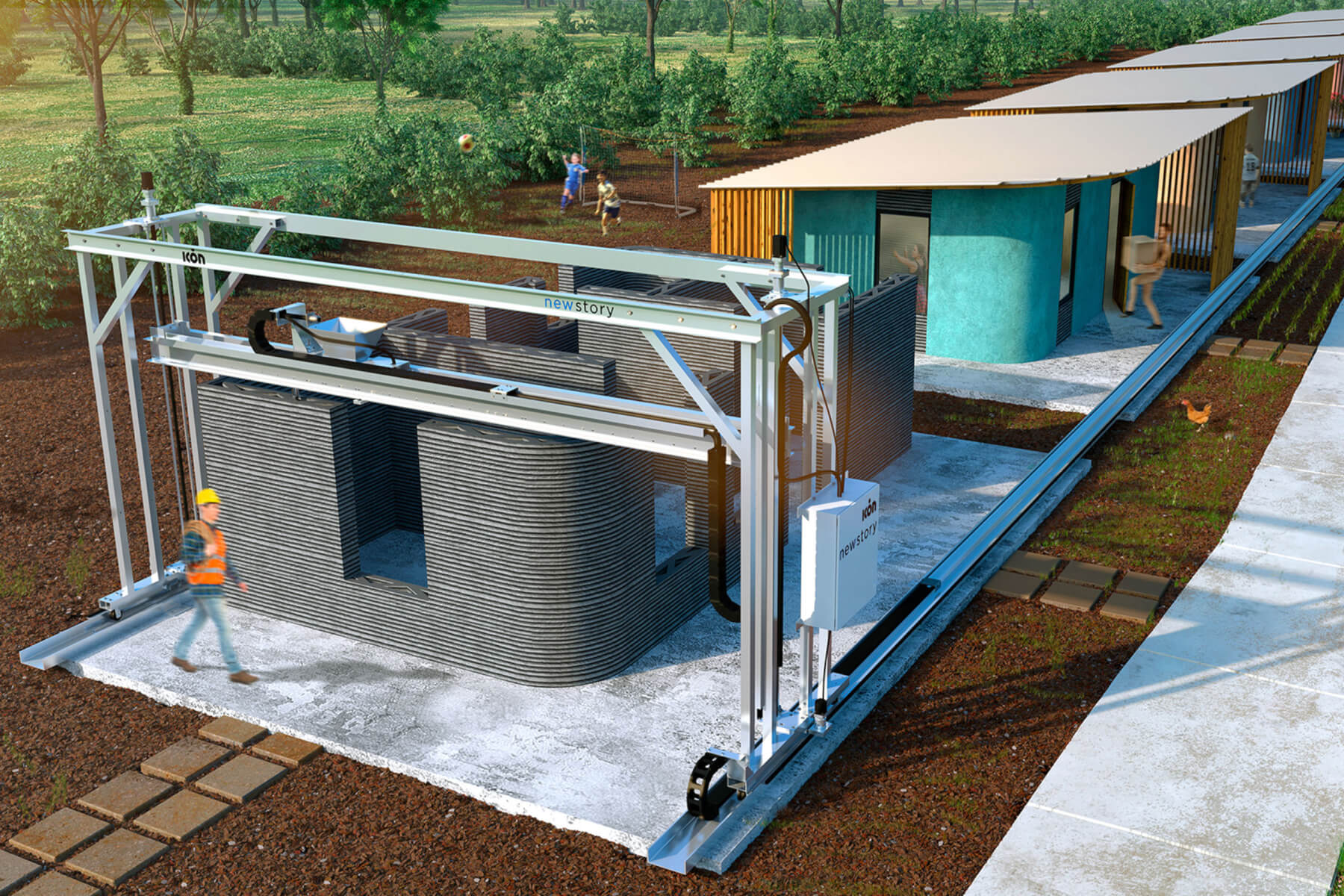 The concept of 3D-printed homes has been around since the early ’70s, adjusted for the industrial possibilities of the time. Most of the theories regarding 3D-printed lodgings had more in common with additive stacking than with the way architects built homes traditionally back then. Now, the 3D-printed home seems to be just around the corner, with more and more talented engineers getting their hands on the tech.

In space, it makes sense!

Let’s leave Earth for a moment, and reach into outer space, to the Moon, or to Mars. An inherent drawback of building anything on the Moon, or on Mars, is the dependency on Earth to supply materials.

Establishing a functional Moon Base is one of the most formidable dreams of humanity, but just the implied expense of hauling supplies from Earth to a possible space build-site may prove impossible, logistically and monetarily. Utilizing 3D printing could solve not only the on-site building aspect of the problem but the potential repair issues, eventual upgrades, and development concerns.

Actually, a team named Relativity Space is developing, at this time, a system capable of the real-time discovery and reconstruction of defects during 3D printing. The algorithm checks if a printed piece presents any fault, evaluating if it can repair it, or if it will be a waste of time for the project. If the team of researchers is successful, then this will save time, materials, and resources essential in space.

Using 3D-Printing robots in a vacuum presents space agencies with numerous advantages and benefits that were not available in the past. The construction of any edifice in zero gravity presents challenges in and of itself, and sending a robot to do the job of a whole team is way less risky and costly. Maybe in the future, there will be no need to send a team of highly trained engineers and builders to coordinate the effort. It will be enough to just send Wally, or Rossie, in a rocket with some supplies to do the job in ten or so years, since the 3D-printing technology is still in its developing stages, and it’s not very reliable, or even standardized.

It all comes down to the base element!

The lack of standardization is not helping 3D-printing advance. And in the industrial field, there are no 3D-printers per se. There are dedicated robots that craft certain items. A machine that 3D-prints a home is not going to be able to build a statue, print ditches, or construct a water fountain; at least not now. And to be able to do that, it needs some preparations, not to mention a team of programmers and engineers to actually make the robot do all the tasks.

Industrial printers are a far cry from what we can do in our homes with a $250 device. They are cumbersome, require maintenance, a ton of coding to get them to print a surface, a lot of mathematical calculations, calibration, and of course, they work with only certain materials.

Speaking of base materials that a 3D-Printed home machine uses to build a house, these are not that different from traditional elements. Builders use concrete or cement, in combination with wax, silicon, and organic foam, a wide assortment of synthetic polymers, bonding agents, and additive welding. Depending on the sector – private, commercial, industrial, or public, as we stated earlier-, the fabrication process can be different from one build site to another.

In essence, most industrial 3D-Printers for home buildings use mostly cement. Large-scale, cement-based 3D printing disposes of the need for conventional molding by placing exactly or solidifying, specific quantities of matter in consecutive layers with the aid of a computer-controlled robotic arm. The material preparation stage includes processing and arranging the concrete into the receptacle. Once the raw concrete has been placed into the container, it can be conveyed through the pump–pipe–nozzle system to print self-compacting concrete filaments, which can build layer-by-layer structural components. These properties will all alter, depending on the concrete mix composition, the distribution system, and the removal device.

An industrial 3D-printer uses extrusion technology, as companies develop their material mix, mostly composed of concrete consisting of cement, sand, geo-polymers, and fibers. Some come with cutting edge, space-age materials, introducing polymers, or other elements to ensure the stability and durability of the dwelling.

A standard 3D-printed home, in theory, lasts around 50 or 60 years because of the materials used. Some 3D-Printed residences use a metal or wooden frame, to reinforce the structure. A traditional home, depending on the level of maintenance and care, can last for generations. – Recomandations from the producer

Notice we said, in theory, because we don’t have any data to back up what developers are selling as space-age materials. It can last fifty to sixty years, or it can all come crashing down on you because the build materials are right now only synthetically tested. As of the writing of this article, we don’t believe that 3D-printing home developers have time machines to precisely tell us how the build materials are going to stand the test of time.

Trial and error are something customary with any new technology as is learning from one’s mistakes. We can’t pretend from someone who just started building homes out of what is almost sludge to have all the answers and take into consideration any scenario. It is impossible. But some semblance of responsibility has to exist. And let’s face it, most of the 3D Printed Homes we see look like Jetson’s residences or an architect’s fancy art gazebo. We will talk more on this subject below, with examples and a gallery.

The moment you made a home for someone to live in, you are subject to moral and legal repercussions. Nobody wants to build a 3D-Printed Home and discover that in 20 years, because you live in a saline environment, your home is going to melt away like the Evil Witch of the West. We will talk more on this subject below, with examples and a gallery.

A 3D-Printed Home seams to be a risky investment when you think in terms of time and structural viability. But the level of which the 3D-Printing technology advances is astonishing. If a few years back, an industrial printer couldn’t even begin to fathom to print 2 stores high building, and just last month, in Belgium, such a house of 90 square meters, was marked as the world’s first two stores high 3D-Printed Home.

The project was initiated and finished using the biggest 3D-printer in Europe, by Belgian company Kamp C, as part of the European initiative named non-ironically C3PO. With some aid from the European Regional Development Fund to finish the building, the result was surprising, to say the least.

Also extremely impressive is the way Kamp C printed the edifice, with a fixed 3D printer in one piece, on-site, minimizing costs and workforce.

This is the exciting reality of 3D-Printing buildings. Even in this case, Kamp C is extremely careful when it comes to this project, stating publicly that they need to see how the materials behave, before considering any commercial use or licensing. Another fun fact about this specific method of printing buildings is that it eliminates the need to make concrete formwork, saving around 60% of on-site resources. Here we consider money, time, and materials the most valuable resources.

The home can be visited by skeptics, potential clients, or investors in Westerlo, Belgium, the company even organizing guided tours of the home. You will need to plan this trip, as the tours have a maximum of five participants per group.

Kamp C is just a recent project that made waves in the 3D-Printing world. But if you look carefully, there are other companies or young entrepreneurs that offer 3D-Printed buildings that are making waves in the construction industry. In the last five years or so, 3D printing technology has build uses, cabins, offices, bridges, pavilions, large-scale structures, shelters, and more as the industry grows at a tremendous rate.

Here we can show, without any regret, some 3D-Printed structures that fascinated us, and the general public. Starting with the creation of Andrey Rudenko, which made a 15-square-meter miniature 3D printed castle in 2014. Rudenko invented a 3D-printing system capable of printing layers of ten millimeters high and 30 millimeters wide. After this project, the creator announced that he was considering printing a full-sized house. Nothing came of that announcement until now, but the castle looks impressive.

Another project, that 3D-Printing enthusiasts may know about, is Additive Manufacturing Integrated Energy (AMIE). A project created by the Department of Energy’s Oak Ridge National Laboratory (ORNL), consisting of more than just a 3D printed house; we’re talking about a solar-powered structure connected to a hybrid electric vehicle, designed to formulate a combined energy system. Both the home and vehicle were built by ORNL’s BAAM 3D printer out of carbon fiber-reinforced polymer material on a 45-square-meter surface.

On the other end of the spectrum, we have a 3D-Printed two-story villa created by HuaShang Tengda in China. The 400-square-meter mansion was build in only 45 days on a frame structure, then the builders progressed to print the concrete on top of the frame. The villa walls are made out of C30-grade concrete and required almost 20 tons of materials to be erected.

There are other examples out there, from the BOD, Europe’s first 3D printed house, to the first-ever 3D printed public restrooms created for China’s International Tourism Expo, or one of our personal favorites, the 3D printed house that can withstand minus 35 °C temperatures of Apis Cor. Below you can see a few examples of 3D-Printed structures so you can see what a building like this can offer.

Not now, not for a while

Maybe in a few months, with some machine learning, some advancements, and a ton of luck, 3D-Printers will not only be able to print homes but also body parts. With more and more investments going into this field, the reality is that 3D-Printing is going to influence the way we experience the future. And it will start from small steps like the one above.

First printing a house, then a complex building, next a skyscraper. Ambition and human ingenuity are the two attributes that will determine how fast 3D-Printing will be part of all of our lives. For now, 3d-printed homes don’t seem like a viable solution for lasting cheap housing. Not now, not for a while now. But in a few years, as the tech matures and more and more capital is going into the industry and new opportunities arise, 3D-Printing is going to save money, time and materials, that are finite on this planet. At least from our point of view.