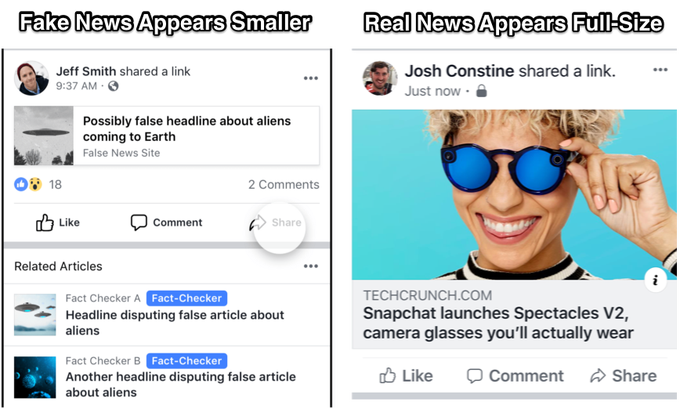 The rise of fake news seems to be more than Facebook can handle.

The company has been under fire for allowing the spread of fake news for more than a year and kept experimenting with tools to eliminate misinformation.

First, Facebook tried to show Related Articles right underneath a controversial link, hoping the users could get a more balanced viewpoint. That didn’t work, so in early April the company announced it’s gonna insert a new icon, that shows information about the publication and which of your friends shared that bit of fake news.

Now, fake news will appear smaller in the news feed, while real news will get more valuable real estate.

Facebook determines which is which by feeding every newly published article to its machine learning system. Suspicious articles will then be sent to human reviewers.

The previous measures failed because Facebook relied too much on humans, ironically. After the company added red warning labels to fake news, they found that the users were much more inclined to share it, spreading the misinformation even more.

This battle won’t be easy to win, that’s for sure, but at least Facebook has a big incentive. After the Cambridge Analytica scandal, all eyes are on Mark Zuckerberg and his company, especially as the elections draw nearer.

If fake videos gain in popularity as well, things will get really messy.