In recent history, Apple is one of the most respected and most valued enterprises on the planet. With the launch of the iPod, and then the iPhone, the company effectively took over the mobile market and revolutionized the way we interact with phones. Thanks to people like Jony Ive, a streamlined design philosophy, and product reliability and functionality, Apple exploded in the mid-2000s. It marked the second rise of the company, if you want.

Jobs was the catalyst for this change, and before he was outed, and then reinstated, some product decisions were head-scratching. The ’90s, most of all, were the years during which Apple put out gadgets and devices that make no sense today. Built starting from some successful products in the ’80s, and some flops, the Cupertino giant, then an upstart, was pushing strange ideas forward. The crazy ’80s saw contraptions like the Apple Modem 1200, Apple 410 Color Plotter, or the Apple Macintosh Portrait Display.

In this list, we will concentrate on crazy Apple products from the ’90s, but future lists including the other decades. So keep an eye out for the rest. With that out of the way, we can now concentrate on products that Apple shouldn’t have ever produced. 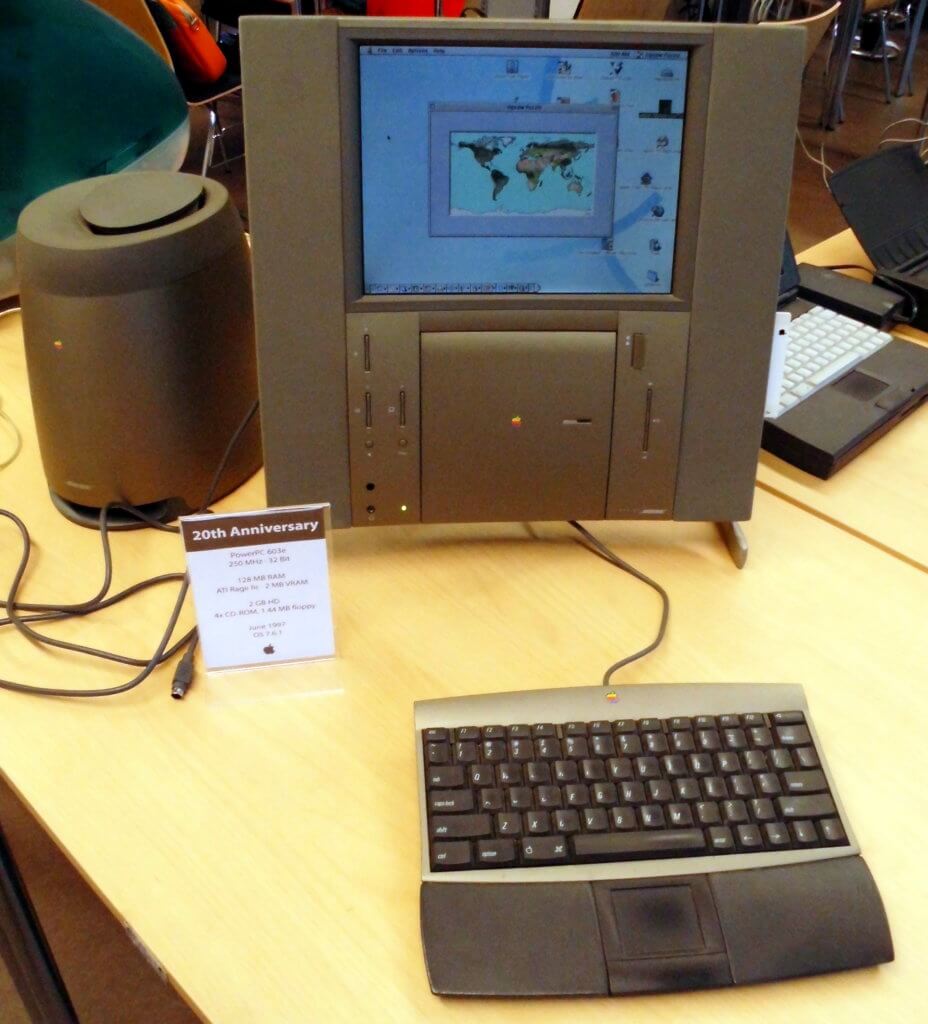 Built by Apple to be the technological showcase of the day, with advanced computing power and aimed at the executive market, the TAM had one major flaw: a price of $7,499. Standing on a PowerPC architecture and boosting 250 MHz, a maximum of 128 MB of RAM, an ATI 3D RAGE 2 chipset, and a 12.1″ Active Matrix display, the TAM was the pinnacle of personal computing at the time. The TAM was also the first trashcan design by Apple’s Chief Design Officer, Jony Ive. Apple only produced 11.000 units of the TAM, and as a collector item, it retained some part of its original value. The machine embodied what a personal computer could do and be, at the time, but it commanded a high introductory price. 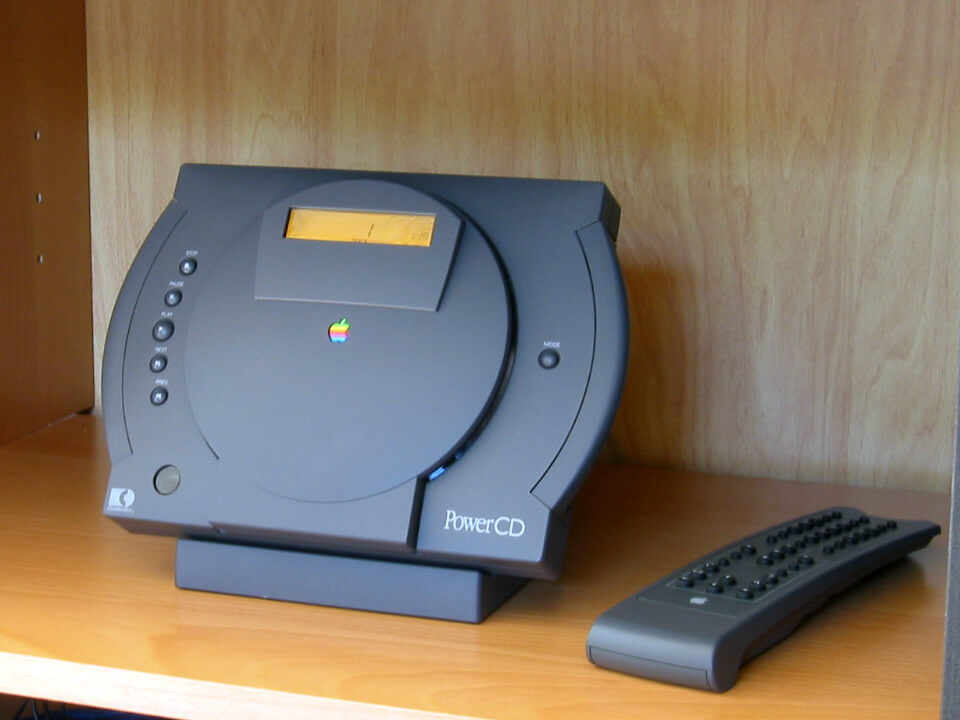 The ’90s was a strange period for Apple. A lot of rebranding took place during that time and the Apple PowerCD was one of the flagrant re-badging products that the Cupertino company sold for years. A Philips CDF-100, Apple sold the Photo CD Player with additional Apple-branded speakers and remote control.

Capable of reading popular formats at the time like Kodak photo CD, data CDs, and audio CD, and with a connection to the Apple Macintosh personal computer through a SCSI port, it was an eccentric computer peripheral. Designed by the Mac of Things division, the Apple PowerCD competed at the time with the Sony Discman. The idea was to make the PowerCD the perfect peripheral for the PowerBook, which would not include a built-in CD-ROM for several more years. Most users remember the penis-shaped remote, the fact that it could play Kodak Photo CD’s on the TV and could connect to an amplifier. The Apple PowerCD was not a complete failure, the company selling the device for years to come, discontinuing it in 95. 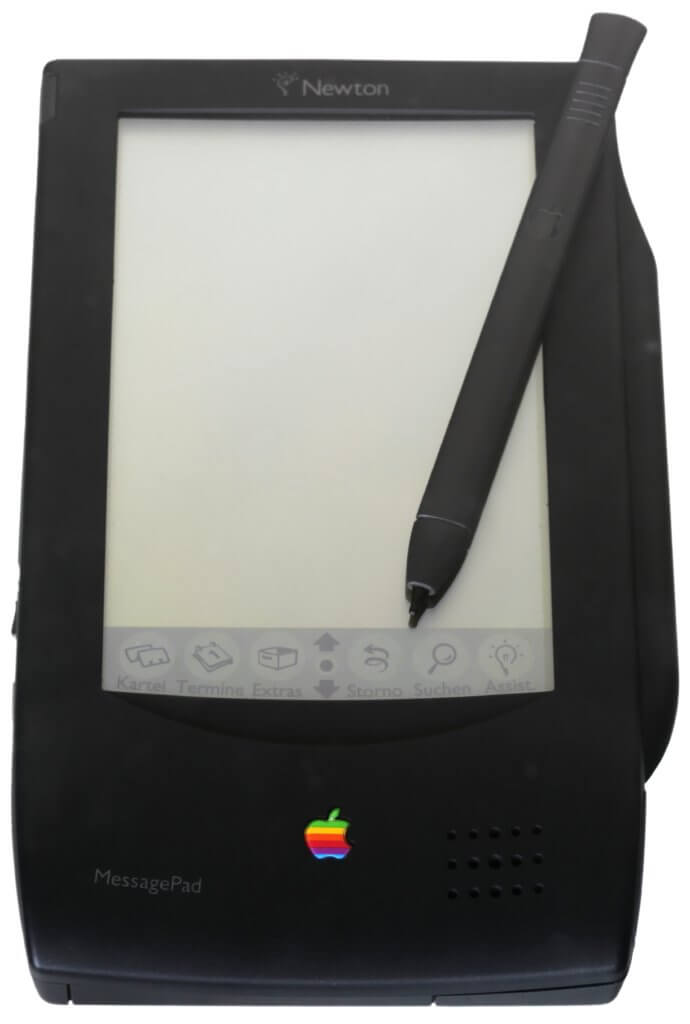 The first in a series of personal digital assistant devices developed by Apple, the MessagePad was designed to work in tandem with the Newton platform. Some manufacturing aspects of the pad were undertaken by Sharp in Japan, and the device featured an ARM 610 RISC 20 MHz Processor with handwriting recognition software.

The MessagePad was a device ahead of its time, and in 1993, was running on restrictive hardware and the Newton OS. It had limited connectivity, an initial asking price of $900, and a short lifespan due to the very short lifetime of the AAA batteries. The handwriting recognition wasn’t stellar, and critics (including the TV show The Simpsons) were poking fun at the MessagePad.

The usual Apple stubbornness to give access to any gadget meant that the basic retail packages had limited connectivity to a desktop. Subsequent models solved the problem, but the first wave of the MessagePad, the OMP (Original Newton MessagePad), in the basic package, was a mistake. Considering that a chain of dedicated Newton-only stores called Newton Source existed from 1994 until 1998, and they were a model for the later Apple Stores, the MessagePad was a successful template in some ways. 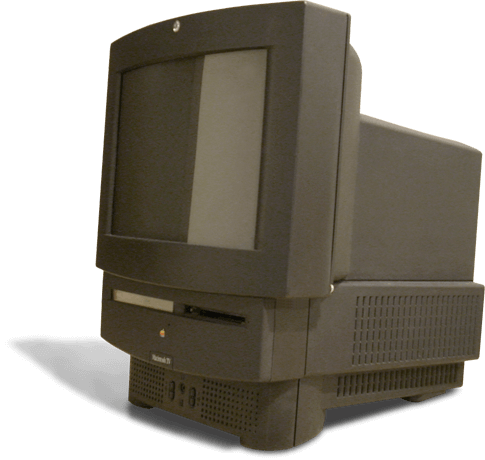 Back in 1993, a personal computer integrated into a TV seemed like an answer to some home logistic problems. Not to mention the fact that you could access your digital media directly on the TV. Launched in October of 1993, the Mac TV was the first all-black Mac, and the first Mac to display a TV/VCR signal. But it came with a small problem: the MacTV was NTSC TV only, the LC 5xx-style machine being sold only in limited markets.

This drawback proved to be the end-all of the product. Sure, it was a blast to switch from workload to broadcasting your network or cable channels with a single keystroke, but only if you were in the correct area. Equipped with an NTSC TV Tuner Card, the Mac TV disappointed potential buyers with its inability to capture video content from the TV, and watch TV in a small window while they did work.

These issues were followed by limited expansion capabilities, only 8 MB of RAM, and a single PDS slot. Supply was also very scarce, the MAC TV selling in only 250 stores. All this prompted the hybrid to die quietly five months after its release. Macintosh TV is another example of reliable and practical technology with faulty integration for the user. 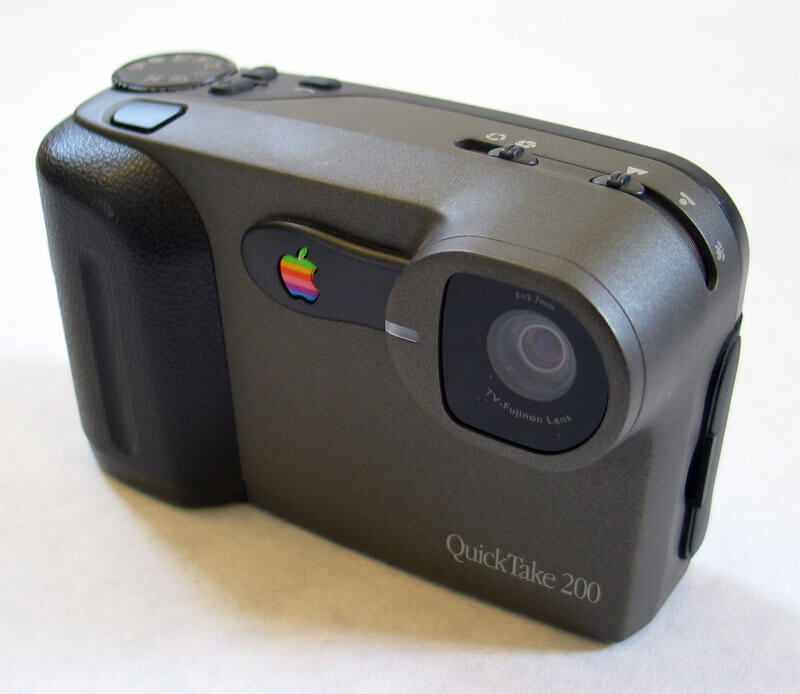 The internal codename for this product was Venus, Mars or Neptune, and embodied the joint effort of Apple, Kodak, and Fujifilm to bring a digital camera to light. Sold for only three years before being discontinued, only three models saw the production line. With the 100 and 150 series built by Kodak, and the 200 produced by Fujifilm, the QuickTake cameras had a resolution of 640 x 480 pixels of a maximum 0.3 Mpx.

Back then, Time Magazine said about the QuickTake that it was “the first consumer digital camera” and ranked it among its “100 greatest and most influential gadgets from 1923 to the present” list. Small problem, the products sold models only on the education and small business markets, as other companies ruined any chances that the QuickTake might have had. Companies such as Kodak, Fujifilm, Canon, and Nikon shortly undertook the digital foto market, and their strong association with photography helped them win the fight in the end. It was also a cumbersome device to use, with distinct limitations and slow transfer speeds. 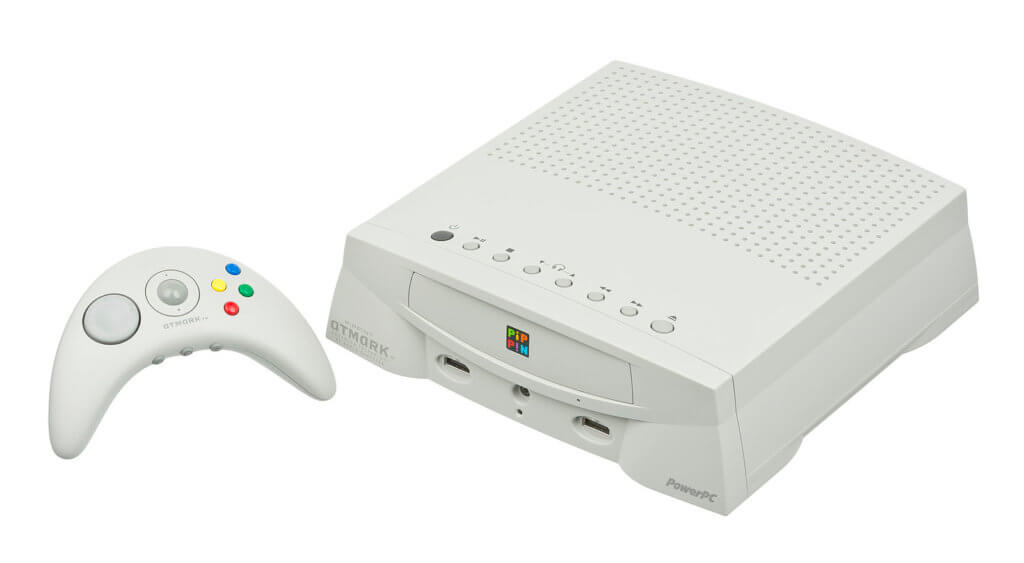 In the early 2000s, from time to time, websites published stories on the next Apple Console including predictions, possible controller configuration, and hardware specs. Every time an article like that pooped up, some 90’s kid hit his head and remembered the TV-spots about the Apple Pippin.

Apple Pippin was an open multimedia platform based on the Macintosh Operating System, with internet capabilities and a dedicated OS and controller. Officially launched in 1996 and discontinued in 1997, the Apple Pippin only sold a measly 42,000 units within a year, proving to be a big disappointment for Apple and Bandai. As Apple focused on the hardware and software capabilities of the Pippin, Bandai developed the ATMARK and @WORLD models and concentrated on the gaming and entertainment business in Japan and the US. Both companies wanted the Pippin to be an integral part of the consumer audiovisual, stereo, and television environment, yet sadly, the games library, the $599 price, and the sheer domination of the PlayStation, Sega, and Nintendo, at the time, decided ultimately its fate.