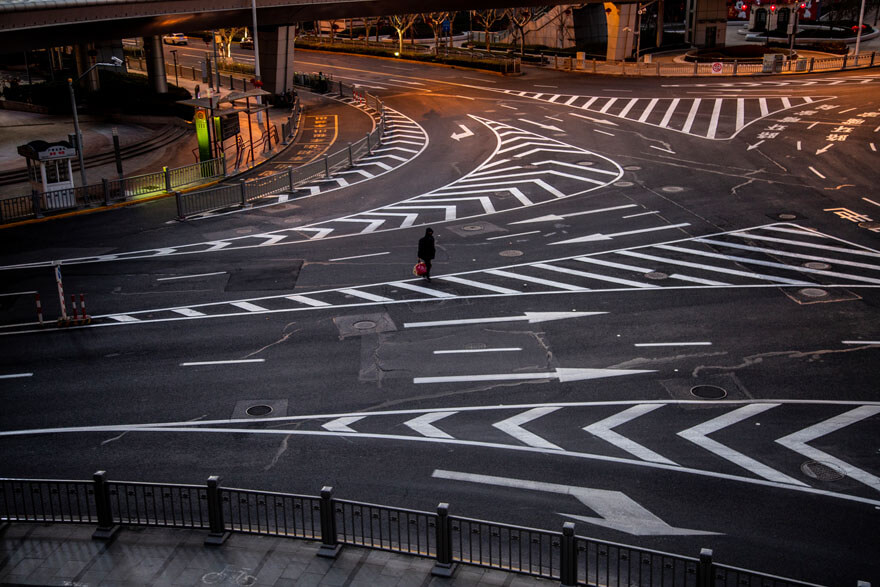 One photographer got to experience a dystopian scenario, normally the stuff of books and TV shows, in real life. Visual storyteller Nicoco found himself completely alone on the streets of Shanghai and documented this reality in “One Person City” project.

Some of you may have already guessed the reason behind the sudden desoltion. Indeed, it is the immediate effect of the coronavirus outbreak. Suspects are kept in quarantine at home, while those infected are currently in hospital being treated for the disease. Many were sent to work from home while some are avoiding public transportation, buildings and streets with high traffic.

All of this translates into a deserted Shanghai. One of the top ten biggest metropolis in the world with 27-million-people has become a ghost city in the past weeks. The stark difference between a city made to accommodate millions of people and the one captured in the pics below shines a light on the horrible situation China and the world is going through:

“My experience living in Shanghai during the coronavirus outbreak … [could be described as] isolation.”, Nicole Chan told Bored Panda. “It’s more than people avoiding areas they think will be crowded. It’s people not leaving their homes entirely. In hindsight, I vastly underestimated the Chinese memory of SARS from 2002. Over several days of biking, walking, and metro-ing around the city, most of the people I saw were janitorial staff, security officers, and cashiers. It is a Where’s Waldo? of millions of people. “

Imagine this emptiness in a city where you normally see tourists mingling in with locals of all ages, elders dancing in sync and women safely walking at night.

It’s terrifying, to say the least. A feeling that the photographer tried to capture in this project. “The objective of One Person City is to capture what this fear looks like: it’s invisible and unknown. I sneezed and a woman two meters away shot a wary glance at me, then took an extra step back.”