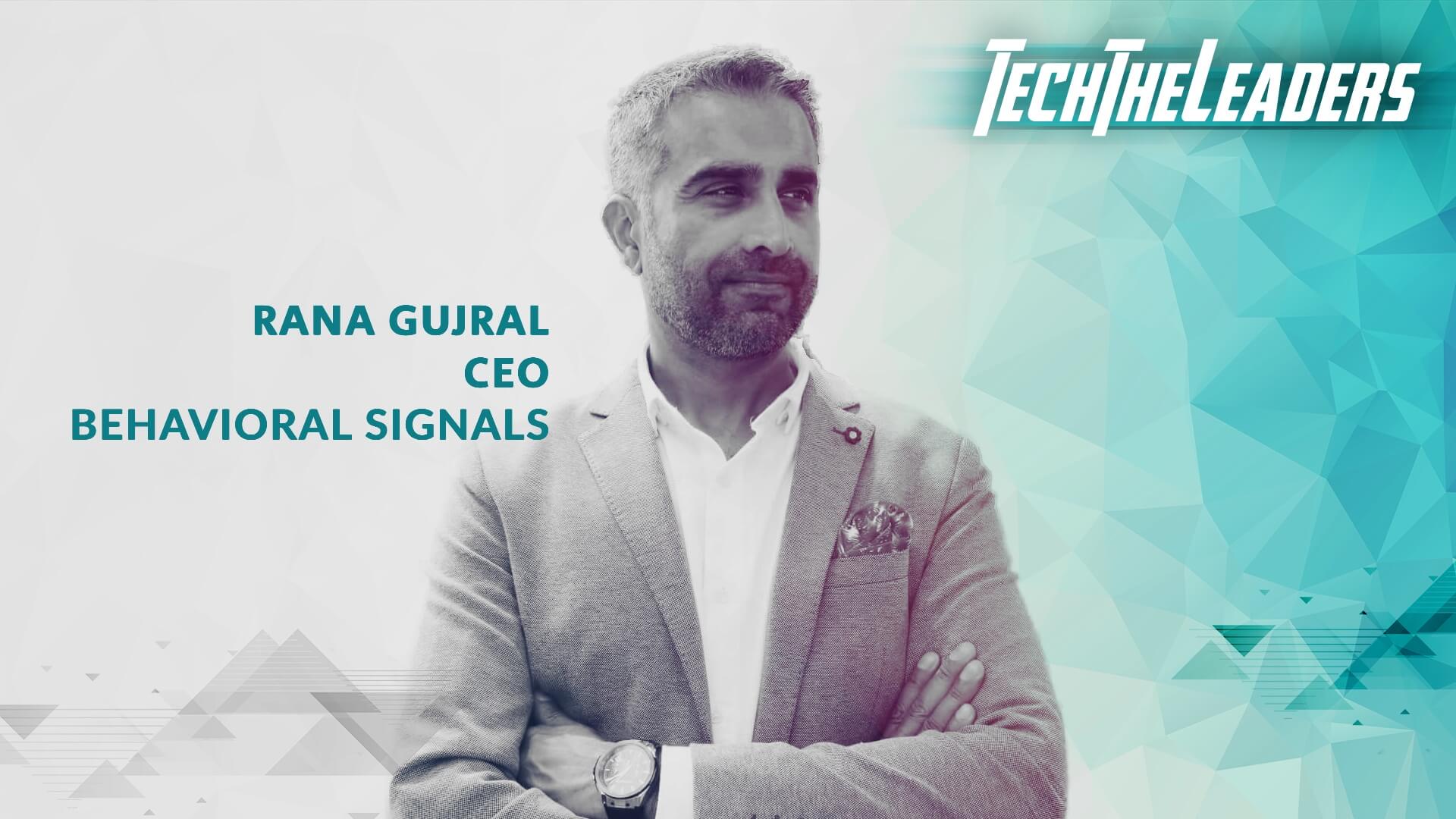 Everything one wants is on the other side of failure. These are not my words, but those of Rana Gujral, the CEO of Behavioral Signals and a top tech entrepreneur you should follow.

This is where you’ll get insight and advice from successful people in the field of technology about how they got a coveted job position, what is their workday like (challenges included), but also where they see the tech world going and how they stay true to themselves in these chaotic times.

Emotional intelligence is starting to become a hot topic these days, after companies have released a plethora of AI-supported devices that have proven their worth in data analysis, learning and adapting to user behaviors but not necessarily in reading emotions.

After MWC Shanghai, where Rana Gujral was one of the speakers, we had a quick chat with him about the possibility of giving machines emotional intelligence, the necessity of doing so and more importantly, the effects of it.

His view on failure did not stem from our conversation regarding AI, but concerning tech entrepreneurship. Rana is also an experienced speaker, investor and the founder of TiZe, a cloud software company for speciality chemicals. He has received the ‘US China Pioneer’ Award by IEIE and has formerly held leadership positions at Logitech and Kronos.

Q1. AI learns and adapts to solve problems yet it can’t create beauty in literature or art and it can’t seem to convey feeling. Why is that?

Great question. My answer would be… not yet. The qualities you describe are part of the puzzle that makes us humans… unique.

It would take many human lives to be able to compute what an artificial intelligence ‘brain’ can in a few minutes. That is its main advantage. It can learn faster and produce results that would be impossible for a human in her lifetime.

That does not mean I believe writing a poem is trivial or that human emotions can be analyzed and turned into algorithms easily. It will need time but we can create it.

Don’t forget – it’s us humans who are building artificial intelligence and if you do look around, at existing AI projects, you will find that a lot of what is being created are services that imitate human abilities, like reading maps and giving guidance for the fastest route, or diagnosing diseases from medical images.

Q2. What can Behavioral Signals do to change that?

Human emotions are what we are working on at Behavioral Signals. We are detecting and measuring human emotions from speech, in order to be able to help machines recognize them and hopefully predict what a human needs. While this may sound very futuristic, it is actually not.

We, as humans, have the ability to recognize how something is being said despite the ambiguity of what is being said sometimes. For example, when our teenage son grudgingly agrees to clean up his room saying “Sure Mom, whatever…” we know he’s not pumped with joy at the prospect of cleaning but our brain has the capability of understanding the intonations of his voice and can deduce what he is feeling.

This can be done for a range of emotions, from joy, happiness to frustration and rage. Humans can actually recognize a multitude of emotions just from the voice. You don’t have to be looking at someone in the face to understand when they’re frustrated or worried on the phone.

So our technology is able to recognize a wide spectrum of emotions and behaviors. We are training our models to predict human intent. What will be the next desire or action of a person? How could a machine understand that, predict it and serve her according to her needs?

“WE ARE TRAINING OUR MODELS TO PREDICT HUMAN INTENT”

Q3. In what industry areas can emotional AI make the biggest difference?

I would definitely, first, say health care. Emotion AI will be able to help both patients and medical staff. For example, an assistive robot that can understand a patient that needs to take her medicine on time or when she may be feeling depressed and in need of emotional support, would be crucial; considering the pressure on our healthcare systems as our population grows older.

AI will be able to support doctors with faster diagnosis while supporting nurses and carers when they feel stressed and anxious at their work. AI has the ability to monitor and support staff and patients 24/7 without getting overwhelmed or exhausted.

I’d say all industries have something to benefit from AI, some more than others. Robots, automated processes, digital virtual assistants, super algorithms behind the scenes, are changing our world as we know it. And the changes are disruptive, just not that obvious, as AI is not a thing you can easily showcase on an exhibition floor.

Q4. Where will consumers interact with Behavioral Signals technology?

Right now, our technology is a sophisticated layer of AI that integrates with existing software. So, for example, a consumer might interact with a sales representative, over the phone, that uses our technology to understand how he feels and help him resolve issues or requests in an empathetic way.

Or the consumer might interact with a virtual assistant, like a home speaker, that will ‘understand’ he feels stressed – because he just returned from a difficult day at work but still has to cook dinner – and suggest an easy but tasty recipe that will have him out of the kitchen in 30 minutes.

“VOICE DATA IS NOW BEING CONTROLLED BY A FEW MAJOR VENDORS […] THAT IS A LOT OF POWER IN THE HANDS OF ONLY TWO COMPANIES, CONSIDERING WE SHARE A LOT MORE PERSONAL INFORMATION ABOUT US VIA VOICE”

Q5. What do you think about OpenAI and the risks of human-level AI its founders talk about?

I don’t want to get into what others believe about AI. I read a lot of articles on AI technologies and how these can affect us. Obviously, some of these articles raise alarms and make me think deeply about their concerns, but right now I’m mostly worried about things like trust, security, and privacy when it comes to AI.

For example, voice data is now being controlled by a few major vendors that make and sell the two most popular home speakers, Alexa, and Google Assistant. That is a lot of power in the hands of only two companies, considering we share a lot more personal information about us via voice than for example through our browser searches.

We need to resolve today key issues through regulation and self-policing to protect people from privacy violations. Data can be used in good ways but it can also be destructive. The same way AI can be used to help alleviate poverty, resolve environmental issues, make humans happier, it can also be destructive like nuclear energy or guns. We need to be alert, aware, knowledgeable and not rely on others to protect us.

Q6. How does the ideal AI-human interaction look like?

Definitely another good question as it is part of our broader vision. For us, it looks like a human2human-like interaction, where the AI is not only intelligent but actually has a personality! Something that will make us think of the AI as a ‘friend’. Something we could easily communicate with and keep up a meaningful interaction.

Q7. I understand you went from working in large tech corporations to paving your own path and leading an emotional AI company today. What was the breaking point for you?

Over the years, I’ve been fortunate to be a part of some incredible, dynamic and successful teams and ventures. While I enjoyed the challenge of driving a company turnaround and a business unit’s growth, I was ready for a bigger challenge. I was also driven towards a personal challenge to create meaningful value outside the current corporate system.

Q8. What difficulties did you face as a tech entrepreneur and how did you overcome them?

Leaving your corporate job to strike out on your own can feel a lot like jumping off a cliff. It’s a huge, terrifying and exciting rush, and it shouldn’t be taken lightly. As an entrepreneur, one needs more than passion, drive and luck to be successful. You’ll need a clear understanding of what you want and what you’re willing to sacrifice in order to get it.

You need a competitive advantage and a deep personal attachment to your project. Without a personal connection, it’s too easy to just throw in the towel when facing seemingly insurmountable obstacles.

You aren’t taught these skills in business school, and you typically don’t build up these capabilities during your corporate career. Understanding what you’re up against and how to leverage you and your team’s personal strengths is essential to be a successful entrepreneur.

Q9. Imagine you are face to face with the first robot to gain consciousness. What would you tell it to understand humans in their future interactions?

Not sure if I will be around when this will happen as I don’t see it happening any time soon. But if I did come across the first robot that might gain consciousness it would probably ‘know us’ very well by then and nothing would ‘surprise’ it.

I doubt if it could even ‘see’ us as being different to itself. It will have been designed by humans to imitate human mental processes. I would probably be eager to start a conversation with it and see what new I could learn from it.

And now that you’ve reached the end, a piece of advice from Rana on failure:

Everything one wants is on the other side of failure. Failure is part of the learning and is part of the journey and is something that you need to embrace.