It's Such A Teaser! Back of Xiaomi Mi 5 Smartphone, Revealed - Tech The Lead

After LG sparked our curiosity with an “always” on display, it’s Xiaomi’s turn to raise our hearbeats with a photo of the smartphone’s back. Until the big unveil on February 24th, we can guess the size and shape of the Mi 5 from its protective, clear case. 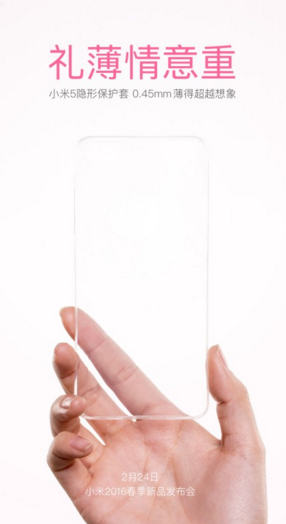 The 0.45mm thick clear case  will add protection to the back of the Mi 5, securing the 16 MP camera in the same time. As you know already, this future flagship for the company is all about the camera. Hugo Barra, Xiaomi’s global vice president, put a special focus on the feature when he went public with the photographic capabilities of the phone in a Facebook post. As you can see in the images above, the images are sharp and details unveiled as a professional shooter would behave.

In 9 days, you’ll see the phone with your own eyes, at the big launch event in China (post-Mobile World Congree reveal).