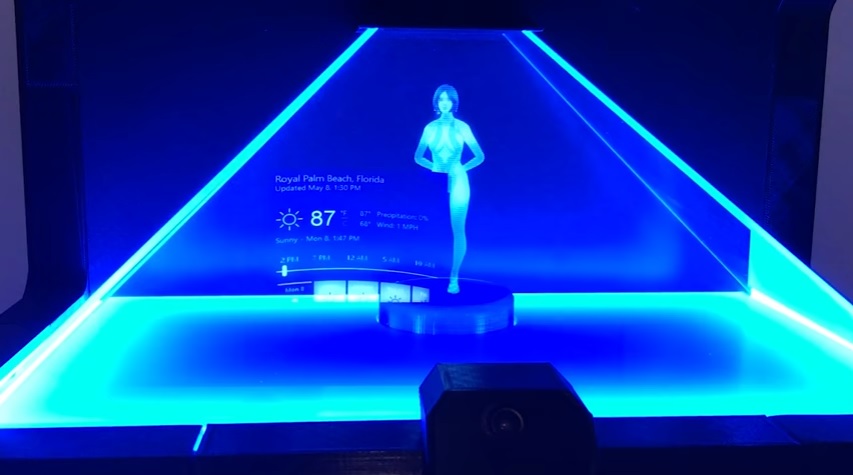 If Cortana had a body, how would she look? Before we could imagine it, one man already gave an answer. #objectmagic

Jarem Archer caught our interest after posting a video of his Cortana appliance on YouTube. In it, Cortana, Microsoft’s virtual assistant, has a holographic body which moves naturally to show answers to user inquiries. “It’s basically what I imagined Microsoft’s version of Alexa or Google Home would be like if they were to use the holographic AI sidekick from the Halo franchise”, writes the creator.

In a lengthy blog post, Archer explains that the model used for Cortana was none other than his wife: “Cortana’s animations were recorded with the help of my lovely wife who regrettably endured many takes of motion capture in our living room. ” Before she stepped in front of the camera though, the creator made a custom enclosure and 3D printed every part of the project. He added an omnidirectional microphone on top of the unit and a speaker in the holographic assistant’s pedestal.

Archer says that Cortana comes alive thanks to a USB monitor that reflects the image on three panes of mirror glass. It’s able to follow him as he moves due to real-time face tracking through the front camera. All interactions are powered by a Windows 10 device and a built-in Arduino that helps the developer control the lights. As for the software used to animate Microsoft’s assistant, the developer employed a Unity 3D app that communicates with a proxy service “that parses data going to and from the native Cortana web service.”

Find out more about Jarem Archer’s creation on his blog, here.