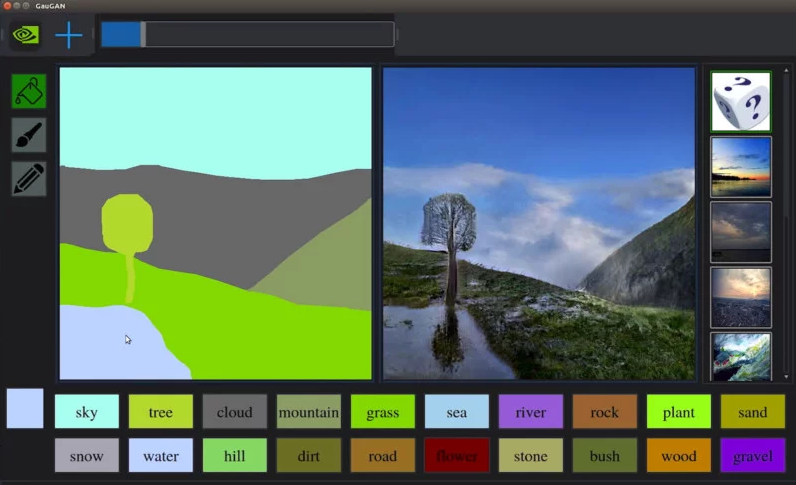 You can hang onto your brushes, still, but that doesn’t mean you shouldn’t take a look at NVidia’s GauGAN AI.

No, it doesn’t display the same amount of raw creativity as Gaugain himself (it’s still an early-stage AI) but it does turn doodles into incredible, life-like art.

While the video itself is a testament to the creativity involved in tech, NVidia’s words don’t do much to assuage the fears of artists who have automation’s breathing down their neck.

“A novice painter might set brush to canvas aiming to create a stunning sunset landscape — craggy, snow-covered peaks reflected in a glassy lake — only to end up with something that looks more like a multi-colored inkblot. But a deep learning model developed by NVIDIA Research can do just the opposite: it turns rough doodles into photorealistic masterpieces with breathtaking ease,” the company writes.

Debuted at NVIDIA GTC 2019, GauGAN has a paint bucket, a pen and a pencil with which users can doodle, even multiple users at the same time.

If they draw a line with a circle at the top, GauGAN will use its AI to produce a tree, different for each user. The demo above was done on an RDX Titan GPU platform, which explains the real-time results.

At the moment, the project is in its early stages but, if work progresses, GauGAN might be released on NVIDIA’s new platform called AI Playground.