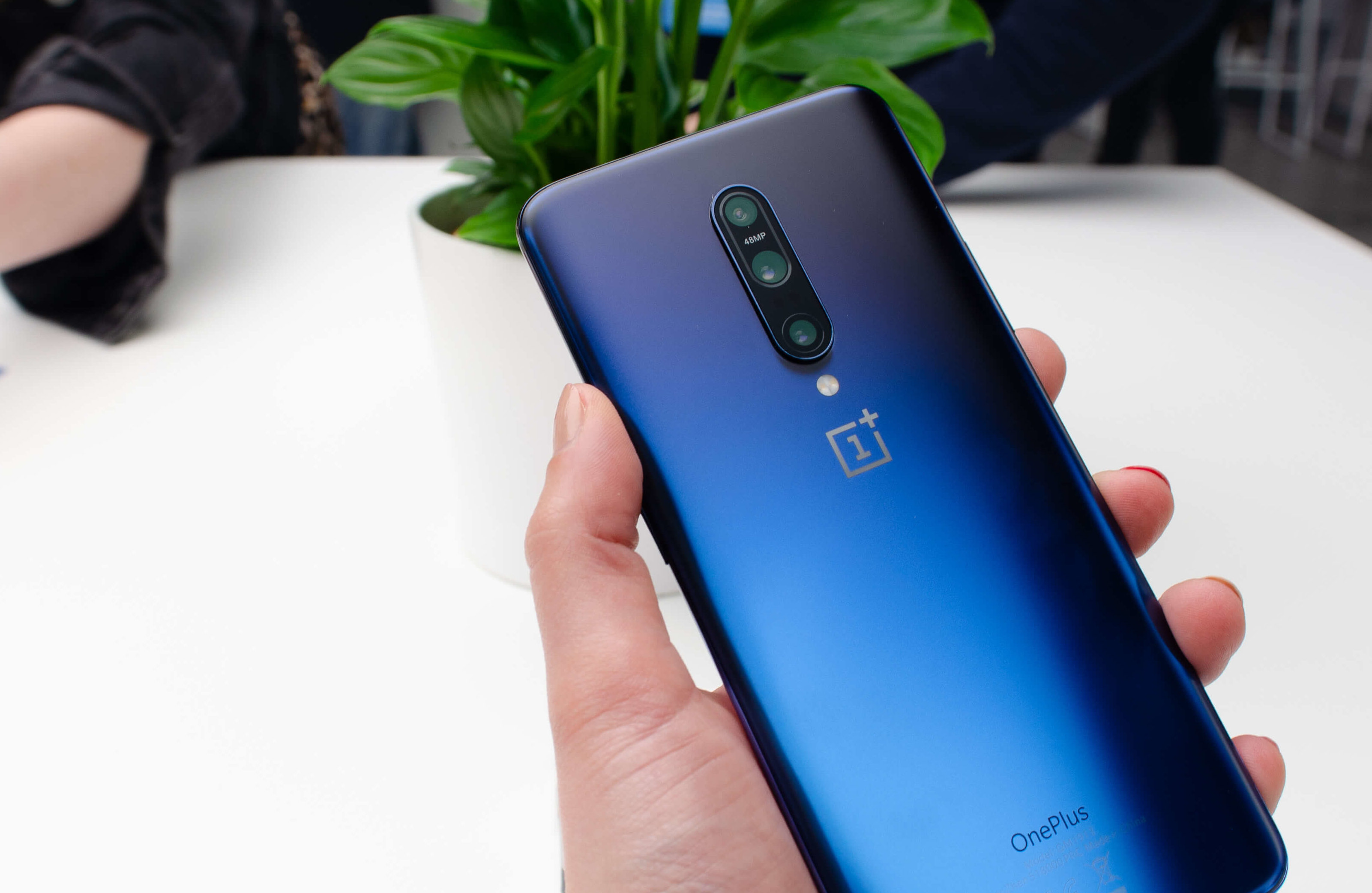 The OnePlus London event was busy before it even started – the queue outside was already stretching out onto the sidewalk, almost two hours before the gates even opened.

They had good reason to queue up like that though: in spite of the fact that the OnePlus 7 had been leaked over and over again over the past few weeks weeks, everyone was curious: were any of the leaks reliable? Were there any other surprises in store?

As we all sat down in front of the stage, phones and cameras at the ready, the inquisitive murmurs garnered more and more traction until it all finally exploded into one single, soothing feminine voice, announcing from the speakers: “Ladies and gentlemen, the OnePlus event will begin shortly“.

There were a few intakes of breath during the announcement, a blast of music and lights, and, from the darkness, OnePlus CEO Pete Lau himself took to the stage.

Thunderous applause along with some cheers were heard, to which he responded candidly, with a wave.

He began his speech emphasizing that now OnePlus is proud to be able to call itself ‘a part of Europe’, with offices set up all across the continent.

“We want to enable more people to experience our products,” he said “and today, apart from our headquarter in London, we are proud to have opened offices in Munich, Milan, Copenhagen, Stockholm and Helsinki. Today we have established a great partnership with over 20 retail partners across Europe and our community continues to grow.”

He thanked the public, kindly, and smiled at another row of applause.

“Over the years, I believe we have found our purpose, with the spirit of ‘Never Settle’ and we can constantly try to improve, together with our community, and truly make a difference.” Lau stated.

He continued saying that the company is now presenting what is ‘the most important product’ OnePlus has ever delivered to the users: the OnePlus 7 Pro.

“Once you will experience it, you will never go back.”

Lau has called it “the perfect product”, before handing the stage over to Vice President of OnePlus France, Akis Evangelidis.

Evangelidis started off by saying that the company’s focus has always truly been on the product and on the end user – “that’s it, nothing else“, he stressed, meeting our gaze, as if he was talking personally to each and every one of us.

“No bells and whistles” Evangelidis continued and then slyly added: “No $2,000 price tag,” which instantly got the public nodding frantically and applauding.

And then, there it was: a smartphone in a deep blue color, resting comfortably in his hands.

“A groundbreaking milestone in the history of OnePlus. It took us years to get to a point where we could deliver a product as complete and compelling as the new OnePlus 7 Pro.” he said, twisting the device casually between his hands, under the hungry eyes of the audience. “We worked hard to get every single detail just right.“

And it all started with the design.

Bezel-less design, a sexy mix of matte and glass

The phone is water resistant and it has a curved-edge design that gives it perfect balance. According to Evangelidis, the OnePlus engineers created over 100 individual prototypes, each with different degrees of variations in curvature, until they finally settled on a model that stands true to the company’s design philosophy.

The phone comes in Almond, Mirror Grey and Nebula Blue colors. The Nebula Blue is Evangelidis’ favorite, as he himself admitted to on stage.

“It feels very different – it’s a combination of matte and glass. But if I never told you, you would never guess that this is glass.” he said, showing the OnePlus 7 Pro to the audience.

The 6.67-inch display is a Fluid AMOLED with an over 93% screen-to-body ratio. It has a QHD+ resolution made out of 4.49 million pixels – that is 560 pixels per inch, in case you were keeping score.

But that was not enough for OnePlus – they wanted to take it further. So the phone wants to redefine smoothness as well – and it does, with a 90 Hertz QHD+ AMOLED display that updates content on screen up to 90 times per second. This kind of feat was normally reserved for gaming phones, but according to OnePlus, this will improve smoothness not only when playing games but also when scrolling.

The display also supports HDR 10 and HDR 10+ and can filter out blue light, to protect your eyes. You also have the option of using Night Mode, a feature that will adjust the brightness and temperature of the screen to reduce eye strain.

Things don’t end here when it comes to pretty lights and colors: the company added a thin line on the side of the phone that lights up when the phone is off and the user receives a notification. That drew a lot of ‘wooo’s from the crowd, let me tell you.

It was very pretty, alright?

OnePlus also brought back Screen Unlock but this one’s more accurate and faster than before. You can now unlock it in just 0.21 seconds.

A camera built for every moment

On the rear, everything is new: the device features the first triple camera system on a OnePlus phone with a camera “built for every moment.”

The main camera is a 48MP sensor and, thanks to a new pixel binning technology, OnePlus managed to increase the individual pixel size by over 70% when compared to the OnePlus 6T. That means the camera produces pictures with better clarity and more detail than ever before, even in low-light conditions.

To make the most out of it, the OnePlus engineers created the company’s most advanced seven-element design; this added element lets more light in through the sensor in a more precise way. This results in a lens aperture of f/1.6, which allows for more detail.

A secondary 8MP telephoto lens was also added to the setup: it comes with 3x zoom. Next to it, we can find an ultra-wide angle lens of 16MP with a 117 degree field-of-view.

And, of course, on the front, the much talked-about 16MP pop-up camera which OnePlus says it has tested over 300,000 times.

The pop-up mechanism is not all there is to it: if the phone senses it’s being dropped, it will automatically pull back the selfie camera in its housing.

Evalgelidis made a show of it on stage about three times, just to make sure we all caught a good glimpse.

I witnessed someone else attempting the move later on, when we were allowed to have a play around with the phone and I have to admit – this particular safety mechanism is more swift than I initially gave it credit for.

Aside from this, the phone also prides itself with being the first one on the market to make use of the new UFS 3.0 standard for storage which means that any of the 128GB or 256GB of storage the phone comes with should be a whole lot faster than what we were used to so far.

According to OnePlus, we will definitely be able to tell the difference, even when performing day-to-day tasks.

The smartphone arrives with a Snapdragon 855 under the hood, coupled up with a 4,000mAh battery.

It’s full of good news around here but unfortunately the phone doesn’t feature a 3.5mm headphone jack, a microSD card or wireless charging. But it’s worth noting that the OnePlus 7 Pro has a Warp Charge 30 adapter and a new stereo speaker system, if we’re to talk about compromises.

I had the chance to play around with the phone myself, after the keynote ended and for starters, I have to say that the Almond option definitely needs to be seen in person, as very few photos can truly do it justice.

This particular option, while almond in name, also has a very subtle, almost pearly sheen to it that can hardly be recreated with renders or heavy editing. If anything, it looks a lot like the toned-down version of the inside of a seashell.

The device overall, regardless of color, is smooth and sleek, with nicely rounded edges that only add to the minimalistic design. It’s thinner and lighter than I expected it to be and I can’t say I disliked the feeling in the slightest.

The phone is quite tall – I believe it’s the company’s tallest so far, so it might prove to be a bit of a challenge for those who, like me, have small hands and short fingers but it’s narrow enough to make up for it.

The photo quality is crisp, almost too crisp I could say – I saw lines on my face I wish I hadn’t, but the colors are true to life and the phone is snappy. I tried my best to swipe and scroll faster than I normally do, play around a little without meaning or purpose and it had no problems keeping up.

“Over the years, I believe we have found our purpose, with the spirit of ‘Never Settle’ and we can constantly try to improve, together with our community, and truly make a difference.”

The OnePlus 7 Pro will officially launch on May 17th but U.S users will be able to purchase it as of today, via a T-Mobile promotion.

Overall, I have to say that OnePlus has done it again: it has offered a consumer-friendly price for quite a high-end smartphone with peak features. While the new model is more expensive than the OnePlus 6T, it doesn’t fall into the ‘uncomfortably pricey’ category, at least not for the specs it offers.

Has the OnePlus 7 Pro beat the other, more recent flagships out there? We’ll let you be the judge but the question is: who will best it in spec-combat in the near future?