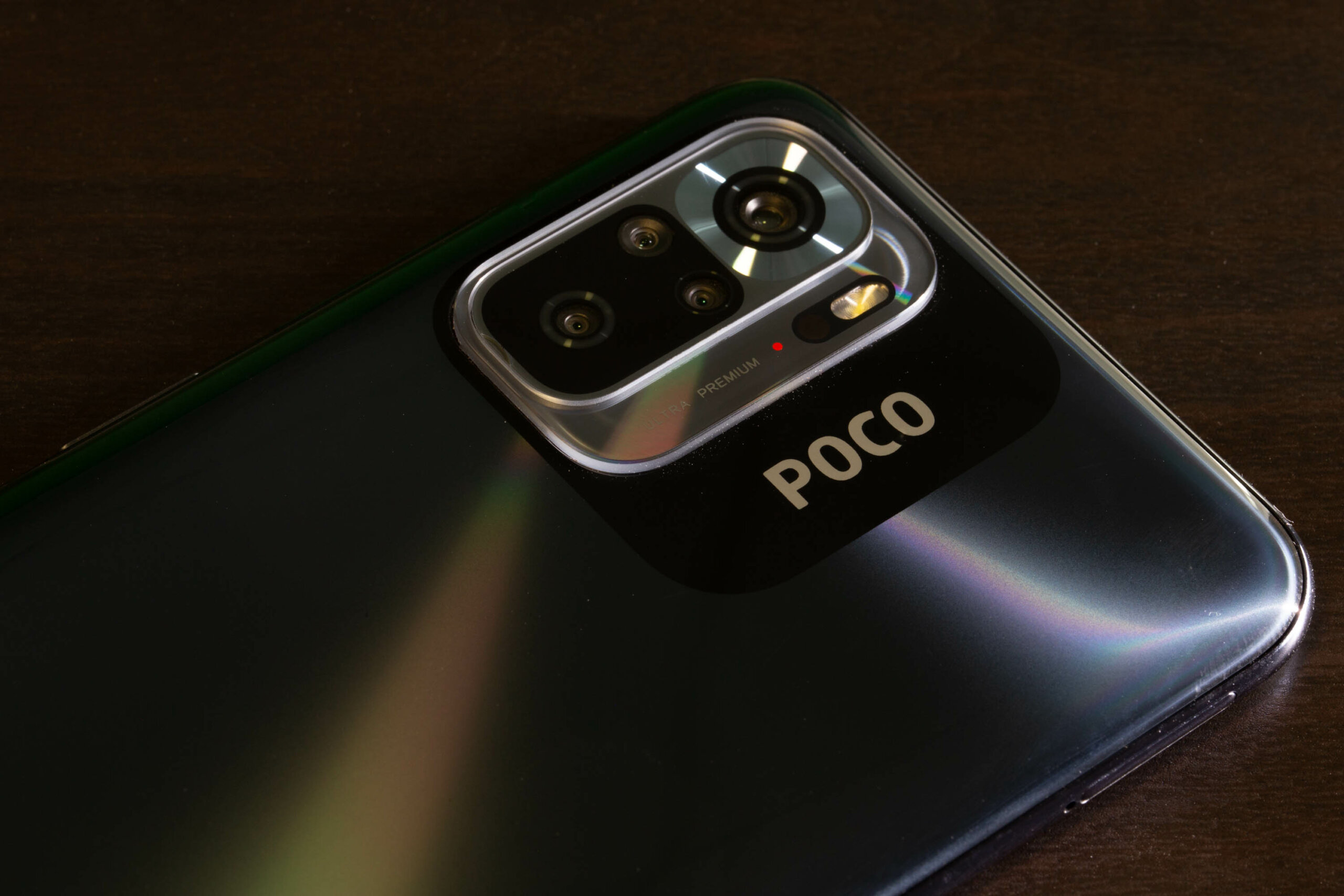 The last time I got my hands on a Poco phone it was 2020 and I was impressed by the amount of tech Xiaomi’s Poco managed to cram in a $300 Android handset. Now, two years later, the company is trying to do the same with the Poco M5s, an even cheaper phone.

At first glance, this is a phone that doesn’t say “premium” by any means but it does suggest “sturdy” thanks to the all plastic build with a curved back.

Design-wise, there’s really nothing out of the ordinary here, though it would have been nice if Poco slipped the “ultra premium” message on the back near the logo. Any man who must say, “I am the king” is no true king and all that.

The phone unlocks via a fingerprint scanner positioned on the right side under the volume rocker. The sensor is snappy and accurate – in more than two weeks, we didn’t have any issue unlocking the phone via fingerprint, not even with dirty fingers.

Coming back to the design, the Poco M5s did look and feel extremely familiar. After a quick Google search, it was clear why. I had owned the Redmi Note 10 for a few weeks before switching to another Android, and that phone’s camera is almost or possibly identical to the one on the Poco M5s, hence why it felt familiar.

Indeed, many online are saying this is just a rebranded Redmi Note 10s, since the specs list is almost identical, but is that really a bad thing?
With millions of Android phones sitting on shelves gathering dust and with the supply chain issues affecting the entire world, can you really fault Xiaomi and other makers for reusing and repurposing hardware? If the Poco M5s had cost more than $200, I might’ve but, since it’s about 75% cheaper than what I spent on the Redmi a couple of years ago, it’s hard to find fault. Even on Amazon, you can usually find a good deal.

All in all, at this price tag, the Poco M5s is more than a fair offering if you look at the specs.

It comes with a 6.43 inches AMOLED display with reasonable bezels, offering an 83.5% screen-to-body ratio.

Since it’s an entry / budget Android phone, we didn’t expect a panel with an adaptive refresh rate and yes, it’s not the case here.

The display has 60Hz refresh rate, with about 450 nits of brightness with a maximum of 1100, which was more than bright enough to use it even on the beach.

It’s also protected by Gorilla Glass 3, so that offers some peace of mind, and the phone has an IP53 rating that means it’s safe from a bit of rain.

Since the included screen protector in the box is bulky and not really easy to install, you could use the M5s for a bit without a screen protector until you have one installed professionally.

You also have the option of an always-on display where you can add an inspirational message, a clock face or a short animation.

As for how the Poco M5s handled daily tasks, we really could find no fault.

The phone uses a relatively old chipset, the 12nm Mediatek Helio G95, with a Mali-G76 MC4 GPU and either 4GB or 6GB of LPDDR4X RAM that supports memory extension. You can add 2GB of extra RAM by dipping into the storage space available on the device.

Our device came with a 128GB storage + 6GB RAM combo, which we extended to 8GB. Since the phone also takes microSD cards, you can add more storage as well – up to 1TB.

In our daily use, which included lots of social media scrolling, about an hour in Microsoft’s Office suite and editing 2-3 cat videos, we found the Poco M5s handled everything with no complaints. While not an Android gamer, I did try to play on it for about an hour and a half and the phone did not overheat, which was a nice surprise.

The M5s also keeps its cool while charging, even at the top 33W top speed, which is great for an already good battery life – but more on that later.

As is the case with all Xiaomi phones, the Poco M5s runs Android 12 with MIUI 13 layered on top. While we’re fans of the stock Android experience, we always liked MIUI as it offers not just cosmetic features like wallpapers and gestures but also helps with the performance of the handset itself, offering hardware optimisation, battery management features and so on.

Plus, unlike most other budget Android phones, the Poco M5s came with very little bloatware, so top points for that. Other than Mi Video and Genshin Impact, we found nothing to uninstall in order to maximize storage space.

We also love the IR blaster that turns the phone into a convenient remote for most TVs. While Mi Remote would not pair with a Samsung TV, it found the LG one in mere seconds and quickly replaced the traditional remote.

And we wanted full storage so we could test the camera which, to our surprise, performed a lot better than the price tag of the phone would suggest.

The Poco M5s has an in-display cutout for the 13 MP f/2.4 selfie camera, which produces reasonable enough selfies if you don’t mind the beauty features.

Even with Beautify turned off, the Poco M5s erases pores, smooths over wrinkles and makes everything a little more glowy – something I remember the Redmi Note 10 also was prone to do.

As for the back camera, the Poco M5s has a 64 MP main camera, a 2MP depth camera, an 118 degrees ultra-wide camera and a 2MP macro camera.

Other than at night, where, unsurprisingly, the camera struggled a bit, all the shots taken by the Poco M5s turned out beautiful, with vivid colors and crisp details.

The macro sensor won’t make you think you’re looking through a microscope or anything like that but it is a nice bonus to have.

Take a look at these Poco M5s camera samples and see for yourself what it can do.

For a $200 device, I expected a lot less but were pleasantly surprised.

After watching HBO Max for four hours, the battery went from 90% to 82%, which was absolutely unexpected but a very welcome feature.

Even with location on, hotspot on and jumping from app to app, we found it difficult to drain more than half the battery in a day.

This, paired with the great camera, makes Poco M5s a very strong choice if you’re shopping for an Android phone on a budget. While I personally choose midrange Androids with over 60W fast charging, since that’s my use style, I think the Poco M5s would make a great gift to parents or those who don’t care about cutting edge technology in their phones. And, since it has a 3.5mm headphone jack, it truly is a jack of all trades perfect for those who are looking for functional, not fancy.

The only downside is that the phone ships with just a transparent case, a screen protector and an USB-C cable. There’s no charging brick, though at this price point, something has to give.

We’re glad it’s the charger that went and Poco didn’t bring down the specs to fit in the budget category.

With great photo capabilities, a large battery and an Android experience that’s reasonably clean, the Poco M5s is way more capable than what the price might suggest.