Tesla is getting ready to take the world by storm with its entirely electric Semi truck, and Pepsi just cast a huge vote of confidence for Elon Musk’s company.

The giant preordered a fleet of 100 Tesla electric Semi trucks to deliver their juice around town in the somewhat near future.

Tesla’s all-electric Semi truck wants to revolutionize freight hauling and it will probably do so, but no sooner than 2019, when it goes into production.

Of course, Pepsi’s preorder is largely a PR move: the company is now the one with the largest order so far, followed by Budweiser, who put a downpayment for 40 Tesla Semis.

Each preorder is essentially a $20,000 investment that Tesla can use to navigate the production hell, as Elon Musk called the process of bringing electric cars to the market.

Pepsi’s investment is good news for Musk’s freight haul ambitions on another front too, since Player 2 just joined the game.

Meet the ET-One, the electric Semi from Thor Trucks that looks like something out of Michael Bay’s wet dreams. It’s sleek, powerful and the logo really seems inspired by Decepticons, don’t you agree? 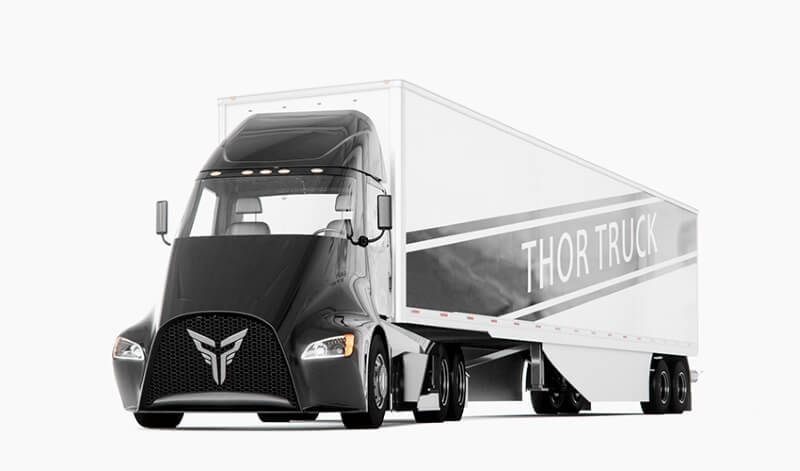 The ET-One prototype is a Class 8 tractor that boasts a range of up to 300 miles and that figure goes for the fully loaded scenario, with 40 tons of freight. The powertrain options range from 300 to 700 HP.

Seeing that a classic Semi costs anywhere from $80,000 to $150,000, both Thor Trucks and Tesla have a long haul ahead: that of convincing the freight industry that electric Semis are not as expensive as they seem.

The ET-One from Thor Trucks promises to have a 60% less maintenance cost compared to traditional diesel trucks, not to mention fuel: 70% less costs per mile.

Thor Trucks didn’t shy away from adressing the inevitable comparisons between the ET-One and the Tesla Semi truck. According to Mashable, the ET-One’s creator has expressed admiration for Tesla and is not looking to go head-to-head with Elon Musk’s juggernaut.

The question is, will Pepsi order something from Thor Trucks as well?