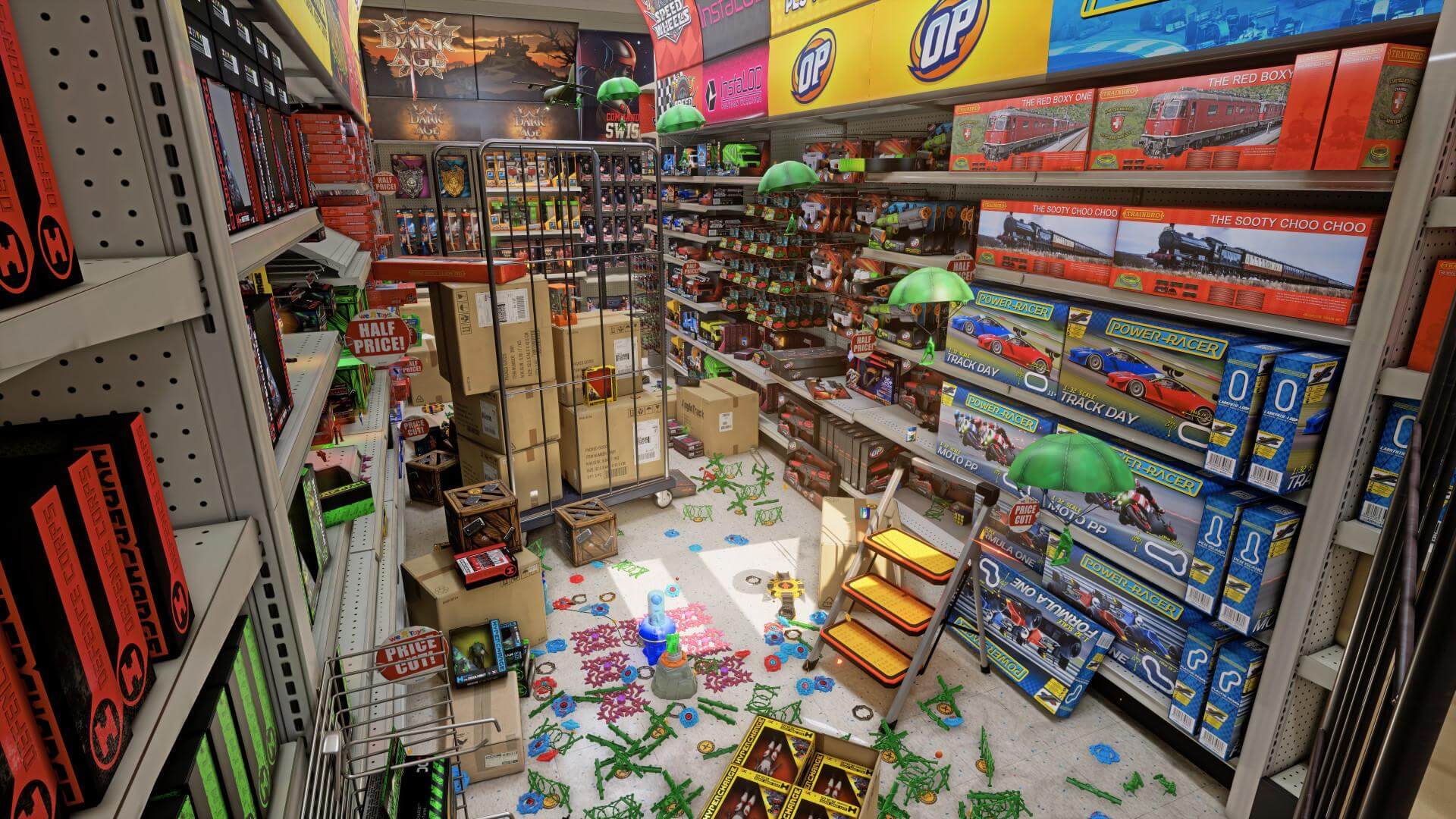 Not all indies are made equal and some do get the attention they deserve. But, for every Hollow Knight and Hades, there are hundreds of other indie titles that slipped through the cracks.

If you’re looking for a lesser-known and more affordable title to try, the ones we’ve listed below might just be right up your alley. And, make sure to grab a Steam Wallet Code from OffGamers here if you’re going to shop for more indie games.

If combing through hours of live-action clips isn’t your cup of tea, then skip to the next entry.

Immortality isn’t a game for everyone.  Those who remember FMV games from the early 2000s or played Her Story will love this one.

It’s a mystery game that asks you to find a missing actress using live-action clips from her unreleased films. It’s not a traditional game, per se, and more of an interactive film, but it’s on Steam and it’s an indie title (a good one, if it doesn’t turn you off right away), so it fits the bill.

Immortality is a game whose results depend entirely on your interpretation of its mechanics. Unless you’re using someone else’s guide (or you created your own after a single playthrough), it’s damn near impossible to have the same experience as another player.

This means that whatever you get out of it is exactly what you invest in it. But, if you put a lot of time, effort, and heart into playing Immortality, you’ll discover a rare piece of media that will stick with you for as long as you’re alive.

Chess (yes, the classic strategy board game) is widely considered the mother of turn-based strategy games. However, it’s very rare to see someone take this concept and mesh it with video games and do it well. This is why exactly this very simple-looking but very addictive game known as Pawnbarbarian deserves the nod.

If the weight of a game is measured by the amount of content, depth, and strategy you can pack in a literal single square tile, then Pawnbarbarian is a neutron star.

Out-of-this-world hyperboles aside, this “thinky puzzle roguelike” has far more blood than your usual Chess game and the same amount of gameplay experience that it can offer.

Also, it’s available on iOS and Android devices as well, just in case you’d like to have the same experience while on the go.

Hypercharge: Unboxed is a fun game in every sense of the word and we don’t mean that for lack of better words.

It’s rare for a game to make you feel like you’re having fun even after you’ve been playing it for dozens if not hundreds of hours. Make no mistake, we’re not against grinding here. It’s just that, sometimes, at the end of the day, you need a game that doesn’t require you to do anything to enjoy and let loose, which is exactly where Hypercharge: Unboxed comes in.

The premise of Hypercharge: Unboxed is simple – you’re a toy that’s fighting against other evil toys because, well, why not? You didn’t need a reason for your toys to go brawling against each other as a kid and you sure don’t need a reason to enjoy a game that lets you do just that now. The best part is Hypercharge: Unboxed is a graphically sound game that doesn’t have heavy PC requirements.

Whether you’re playing it alone or with a couple of your friends, Hypercharge: Unboxed is well worth your time and money.

Imagine if the older The Legends of Zelda games and Dark Souls had a baby and you get Death’s Door.

This action-adventure game isn’t afraid to show its inspirations on its sleeve, but its unique premise makes it stand out and become more than just a derivative game. In it, players will take control of a crow whose job is to reap monster souls for the Reaping Commission Headquarters. So, you know, like the grim reaper but for the non-human entities inhabiting the universe.

Unfortunately, unlike us, frail humans, monsters can put up a fight and it’s your job to be ready when they resist the reaping.

The mysterious organization will send players through everything from forested areas, cemeteries, and dungeons, in search of monster souls. Along the way, players will solve clever puzzles and unlock new powers.

It’s the latter that really stands out, especially after a while, as the game’s combat mechanics are punishingly fair, certainly enough to make every swing of your sword and soul reaped as rewarding as the other.

You’d think that an 18th-century degenerate and gambler (at the time, it wasn’t an either/or kind of thing) wouldn’t make for a compelling lead character, but you’d be wrong. In Card Shark, you’re a hustler who makes a living by swindling opponents. It doesn’t matter if you’re sneaking a peak at your opponents’ cards or adding cards to your hand, nothing is off the table unless you get caught, in which way, it’s game over.

Card Shark is all about strategy and tactics as well as how fast you can put two and two together to walk away with a win. Eventually, you’ll be so good at hustling, it’ll come second nature to you – just like breathing.

As a bonus, Card Shark wraps the entire premise of the game together with its art style, music, and a surprisingly complicated story that you won’t be forgetting anytime soon.

There’s been a game about shopkeepers before, but there isn’t really much out there that explored the other side of the traditional RPG resting places – the inns. This is where Travellers Rest comes in.

In an industry full of sweeping adventures involving treasures, dungeons, dragons, and sometimes all three and then some, Travellers Rest puts you in charge of taking care of these weary warriors. You’ll start with an abandoned inn that you’ll have to turn into the go-to place for the world’s would-be saviors to get some respite from the battles ahead.

Instead of leveling up, learning new skills, and acquiring treasures, you’ll spend your days making new places for heroes to sleep in as well as growing food to feed them and brewing them the occasional beer. In turn, they’ll recommend you to their other friends and acquaintances, which goes a long way towards turning your inn into the next big thing.

It’s been said that AAA games today spend at least an entire console generation’s lifecycle (roughly around 7-10 years) in development. Chained Echoes is far from a big-budget project but it spent 7 years getting made, and we’re glad Matthias Linda didn’t stop.

This 16-bit JRPG is a love letter to the Breath of Fire, Secret of Mana, and Final Fantasy games of the past.

What makes Chained Echoes unique is its ability to stand shoulder-to-shoulder with its heroes. It might take inspiration from the top games of the golden age of JRPGs but it also does so much more with it. It features a warring world that feels every bit as vital to its story as its characters with a unique battle system that we can’t believe isn’t more common. Granted, Chained Echoes is far more adult-themed than most would like but it’s not to the point of tasteless and the pacing of the story gives you enough time to digest everything.

If ever the 2020s see a resurgence of tactics-based JRPGs, look no further than Chained Echoes to be leading the charge.

We’ve been spoiled for choice when it comes to indie games for years and it’s become hard to separate the ones that are truly great from those that are just good. But, after weeks of deliberation, we came up with a list of 7 underrated indie games that even the most hardcore indie lovers might have missed out on Steam.

If you’re looking to build your backlog of games to clear with cheap but memorable indie games, look no further than the ones rounded up above.

About Sarah Paul: I foster relationships between gaming enthusiasts and gaming developers to create relevant content for gamers worldwide. I also happen to be a passionate writer and certified night owl.

Also read: Everything You Need to Know About Hogwarts Legacy