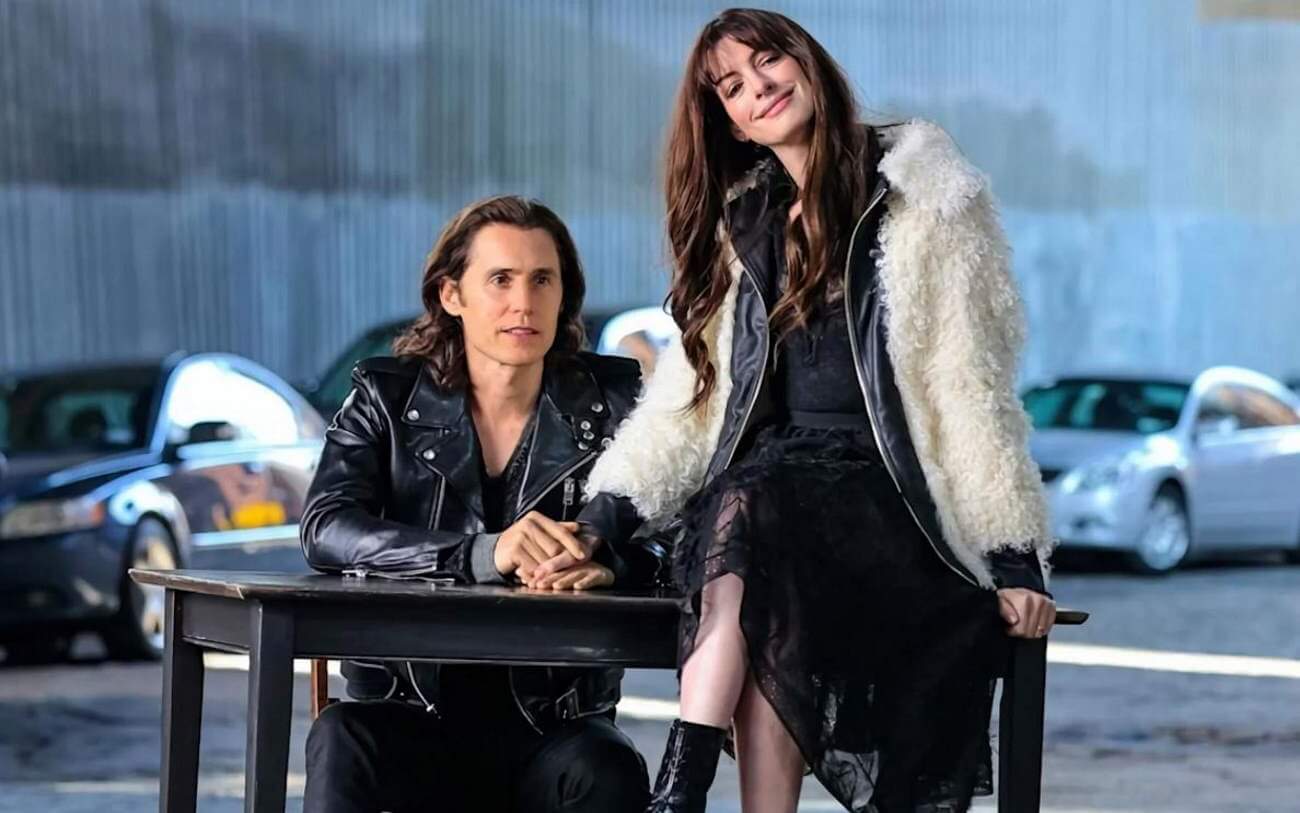 After its huge hit Severance, the best TV show of 2022, AppleTV+ is betting that the story of a tech startup will make it big.

On March 18th, WeCrashed will be released on Apple TV+, a TV series featuring Jared Leto and Anne Hathaway as husband and wife.

The short story: a tech guru and his wife, a cousin of Gwyneth Paltrow, built a company valued at $47 billion, possibly started a cult, then exited with a golden parachute while the company was bleeding $3000 a minute. Oh yeah, and made people ask for kombucha on tap at the office.

So, is WeCrashed based on a true story?

Yes, WeCrashed is based on a true story and a phenomenal one at that, showing all the pitfalls of capitalism and the relentless hustle culture surrounding tech startups. It also has a few compelling characters in it that will make for plenty of drama.

WeCrashed the Apple TV+ series is based on WeCrashed: The Rise and Fall of WeWork, the hit podcast by Wondery.

The first episode of the show is being written by Lee Eisenberg, who has multiple The Office episodes to his name, and Drew Crevello who, outside of various writing projects, also worked on movies like Deadpool and X-Men: First Class.

So, why is WeWork famous? What happened to WeWork?

It’s clear that Apple spared no expense in terms of cast, with both Jared Leto and Anne Hathaway attached to the project, and you will understand why when you look at the WeWork story.

WeWork is an actual publicly traded company that still exists today, albeit in a smaller form than its huge beginnings – and hopefully less like a modern-day cult.

“Inspired by actual events — and the love story at the center of it all. WeWork grew from a single coworking space into a global brand worth $47 billion in under a decade. Then, in less than a year, its value plummeted. What happened?”

This is the official synopsis from Apple and boy, does it tease!

Called by NYT “an implosion unlike any other in the history of start-ups,” WeWork started out as the first start-up dedicated to coworking spaces. WeWork bought valuable real estate in big cities like New York, London or Tel Aviv, parceled them out to shared office spaces, then rented those spaces to its members.

What made WeWork such a special start-up was its culture, created by CEO Adam Neumann and his wife, Rebekah Neumann. They envisioned creating a world where people work to make “a life, not just a living” and attracted a cult-like following focused on sharing spaces and values.

That investment made the company send 8,000 employees on an all-expenses paid trip outside London, with a Lorde concert and a Deepak Chopra-led meditation. WeWork looked to be the dream home, job and collective for any ambitious millennial.

But, inside the offices, a crazy story unfolded.

“Behind all the kombucha taps in WeWork’s offices was a culture of extravagant splurging, furious hedonism, and questionable business decisions. The bad behavior persisted for a decade before it all came crashing down,” explains Wired.

The culture got so crazy, that in July 2018, the company restricted employees from being reimbursed by the company for meals that contained pork, poultry, or red meat. That might make you ask yourself “Is WeWork a cult?”. According to Wall Street Journal reporters Eliot Brown and Maureen Farrell, yes.

They wrote a book about WeWork called “The Cult of We: WeWork, Adam Neumann, and the Great Startup Delusion” which has plenty of insights into the crazy startup that also inspired Apple to turn it into a TV series.

“Neumann wanted to build a WeWork ecosphere that would one day pervade all aspects of society, the authors write. There would be WeLive apartment rentals and WeGrow schools, the latter a Montessori-like experiment overseen by Neumann’s wife, Rebekah Paltrow, cousin to Gwyneth” – writes Washington Post.

The outlet also shows how, having built the company towards a billion dollar valuation, CEO Adam Neumann became an eccentric figure.

“At first, Neumann was weird in the usual way that newly rich boy geniuses are weird. He skateboarded to work, did tequila shots at meetings and hired Lorde to play the company’s annual Summer Camp gathering. (Attendance at Camp was mandatory, the tequila shots were encouraged.) By the end, he was increasingly grandiose, contemplating how he might end world hunger, broker peace in the Middle East and “elevate the world’s consciousness,” all while using WeWork as his personal piggy bank.”

Sounds like Jared Leto, who some think is also a cult leader thanks to his rabid 30 Seconds to Mars fanbase, will have a field day playing Neumann!

What is Adam from WeWork doing now?

However, while the public saw WeWork as a success, the company was bleeding money from all sides – estimated at more than $3000 a minute.

WeWork was supposed to have an IPO but that required revealing the giant losses the company had, so the IPO was canceled and Neumann removed from the head of the company.

WeWork’s finances were so bad, the company couldn’t even go into layoffs because it couldn’t afford to give those employees severance packages.

And, all through that, Adam Neumann remained unscathed. While all this was going down, Adam Neumann negotiated hard with initial investor Softbank. In the end, the WeWork founder Adam Neumann received a $445m payout in exit package – 2$45m in company stock and $200m in cash.

Not bad, right? And if you’re wondering what Adam Neumann is doing now, a report from The Motley Fool investment website will amuse you (or make your blood boil, depending on what you feel about capitalism).

That report is titled “WeWork Co-Founder Adam Neumann Is Now a $1 Billion Landlord”. It reveals that, in late 2019, new WeWork majority owner Softbank was so desperate to remove Neumann from the helm, it paid him a combined $778 million in consulting fees and stock purchases to leave.

According to Wall Street Journal, Neumann spent that money “quietly amassing a giant network of over 4,000 apartments across the Southern United States.”

Until now, Neumann has not come public with any new startup ideas like WeWork, so it’s likely he’s just settled to be a regular landlord quietly profiting off the masses.

Will we see that in the WeWork TV show?

There is no telling but the answer is likely “no”.

The WeWork TV show featuring Jared Leto and Anne Hathaway has just 9 episodes listed on IMDB, with the first two to launch on March 18.

Considering the crazy story of WeWork and its charismatic leaders, it’s hard to imagine 9 hours is enough to cover everything until the present day. It will probably show the beginning of the startup, build up the characters and deal with the fallout of the IPO and Neumann’s golden parachute for the grand finale.

Of course, it’s likely that the makers of the show will try to toe the line between black and white and focus on the complex characters, not the politics.

That’s confirmed by this Jared Leto and Anne Hathaway interview. In it, he revealed that, before he got the role, he was familiar with and admired the WeWork culture.

“But I think for me as well, sitting down with Lee and Drew was pretty interesting to get a sense of where they wanted to go with this story. We kind of shared our thoughts and ideas. I was happy to hear that they didn’t want to just make a takedown piece that kind of vilify people and really look at this nuanced story and dig in deep into character,” Leto said.

“And this is a painting…it’s not a photograph…it’s not a documentary…so it’s impressionistic. When you play a real-life character, I always feel like you have an obligation to do the work, dive deep, do the diligence, and to bring that person to the screen with as much dignity and grace as possible. So, that’s what I did in this scenario,” he added.

His sentiments were echoed by Anne Hathaway. However, since she was unfamiliar with the original story, she did her own research into Rebekah Neumann.

“I would find people that knew her and I would ask them questions, and it was very interesting to kind of hear people’s experience with her versus the way she’s portrayed in the media. There’s a big difference there,” she said.

Considering both Hathaway and Leto have Oscar awards under their belt (for Les Misérables and Dallas Buyers Club, respectively), they are sure to turn in a memorable performance in WeCrashed.

After all, what happened at WeWork is a fantastic story.

Stay tuned on Apple TV+ on March 18th and see for yourself!

Also read: Joseph Gordon-Levitt to Star In Show About Uber